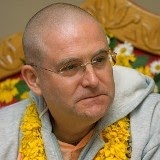 [And another one bites the dust]

Kṛṣṇacandra Dāsa – Śrī Vṛndāvan Dham: News has been coming out of Australia that GBC and Sannyāsa Guru Prabhavisnu Swami has been again caught with a Prostitute in Bangkok, Thailand by a senior disciple of his. The incident apparently occurred three weeks ago and has been kept under wraps all this time.

Prabhavisnu Swami took the renounced order [sannyāsa ashram] in 1979 and was soon made a member of the GBC with Thailand being one of his first zonal assignments; he became the GBC of Australia in 1987. He is well remembered in Australia as being a strong advocate for Book Distribution. However, he is also known for not being able to control his sexual desires and this recent incident is the second incident to be brought to the attention of the GBC body. The first incident in the 90’s, also in Bangkok Thailand, was kept hushed up but he was reprimanded and according to some reports he was reprimanded by the GBC and was made to stop initiating disciples for a period of time.

In this latest incident, it is claimed that he was confronted by one of his long time disciples when he was observed walking in the street arm and arm with a prostitute. It must be noted that it is rather disturbing that an ISKCON Sannyāsa Guru is visiting prostitutes in Thailand and especially in Bangkok which is notorious for its prostitution trade since the 60’s with a high percentage of sexually transmitted disease what to speak of a high prevalence of HIV /AIDS among sex workers which has increased since 2005 due to public indifference.

As far as we could find out so far; Prahladananda Swami the Sannyāsa Minister and Janananda Goswami have been dispatched to Australia to do ‘damage control’ and ‘confronted’ the Swami on the 5th of this month. The Australian Yatra who are slowly becoming more educated with regards to the corrupt ways of the GBC and ISKCON Gurus are now in up roar at yet another fall down by a Sannyāsa Guru.

The worldwide devotional community will be watching how the ISKCON Institution will deal with this matter. This is especially so since the Swami has been cautioned before for falling down with a prostitute in Thailand and it seems has not yet sought to deal appropriately with this anartha which is degrading his spiritual and material life.

We will also be observing how the Swami himself handles this situation. It is hoped that he can demonstrate his sincerity and integrity by changing his cloth and getting married and at the same time step down from his position as a Rubberstamped Guru of FISKCON immediately and work with his disciples to help them to begin taking shelter of Śrīla Prabhupāda – instead of an ‘out of the frying pan and into the fire’ jump to another Rubberstamped Guru Crook.

The GBC and especially the Gurus realize that this is a terrible situation as it shines the spotlight on their own illegal status as Gurus in ISKCON and yet again exposes them, as a group, as not being qualified to be initiating spiritual masters in our Vaiṣṇava tradition under Śrīla Prabhupāda.

How many more fall downs is our international community going to be privy to before the general devotees wake from their slumber of denial and ignorance and begin to outrightly reject these criminals whose selfish intentions are relentlessly being exposed and who continually bring disrepute to our glorious Vaisnava tradition?

PADA: This is pretty amazing in that -- the bogus acharya of the Gaudiya Matha "Ananta Vasudeva" married a prostitute. There was a child, and as the child got to be about ten years old, the child began asking his mother (the "guru mata of the Gaudiya Matha") why the house always had strange men in there? She then knew the boy was catching on that she was a prostitute. And maybe he would eventually expose that, and destroy the faith people had in Ananta Vasudeva as the acharya. So, she killed the boy with poison "to save the integrity of the Gaudiya Matha." When Ananta Vasudeva came home, he asked, where is our son? Well, he had to be killed so we could save your post as the acharya. So Ananta Vasudeva asked her, "Where is that poison?," and so she gave him the bottle, and he drank the whole thing down, and commited suicide. ys pd
Posted by krishna1008 at 6:43 AM