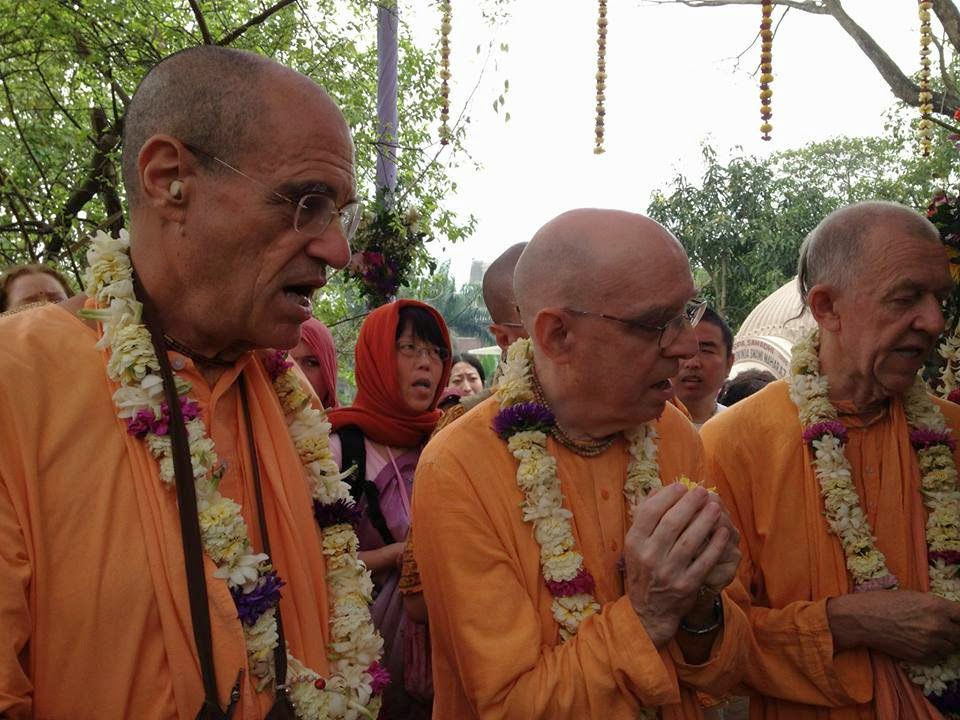 [PADA NOTE: To submit articles to PADA, please send them to angel108b@yahoo.com. We can use your name or make it anonymous at your request. ys pd]

MINUTES OF THE ANNUAL GENERAL MEETING

[PADA: Great, this year in 2014 Anuttama announced that he thinks acharyas have been falling down all along in Vaishnava history. This is definitely not connected to Srila Prabhupada's teachings. And so, this is the person the GBC hand selects as their chairman, the person who thinks acharyas have always been inclined to being debauchees.]

6. His Holiness Prahladananda Swami is appointed as Assistant GBC.

[PADA: Prahladananda swami is the person who got into an argument with PADA editor and he started shouting "I never want to talk to this man ever again." Well yea, because he supports a criminal, debauchee and homosexual "pure devotee guru lineage," no wonder he does not want to answer why he is doing that?]

9. The resignation of His Grace Ravindra Svarupa Das as a GBC Member is accepted.

[PADA: Ravindra has resigned because of his tyrant behavior in Philadelphia,, but his philosophical paper is still found as the keynote siddhanta paper on the GBC site?]

103. Reaffirmation of Ministries and Standing Committees

The following are the Ministry and Standing Committees and their membership assignments for 2014-2015:

[PADA: Great, we need to "communicate" to the world that Lord Krishna's messiah successors are often debauchees, drunkards, womanizers, homosexuals, criminals etc. That is fine way to represent KRISHNA's guru parampara to the world. Then we wonder why the temples are empty, when we expect people to worship debauchees as their messiahs, and the masses are not standing in line to join that program? Its like selling bags of dogs stools and wondering why -- there are hardly any customers?]

[PADA: Seems like this guy is in charge of 50 "departments," because no one else is foolish enough to want to be the designated person in charge of anything.]

[PADA: Jayapataka is a basket case, he could not manage a flea market stall.]

[PADA: Right, the women who have supported the molester messiahs guru project are being rewarded with a post.]

[PADA: Prahladananda seems to be the last piece of glue holding the whole molester messiah's program together, his name  is everywhere?]

[PADA: Right, the GBC has allowed photos of debauchees to be placed on the altars, to have offerings made to these debauchees. They are still saying people have to offer bhogha to conditioned souls. None of this was approved of by Srila Prabhupada.]

[PADA: Great, Hrdayananda's arch supporter gets rewarded for promoting this bogus messiah -- same one that the GBC has just now had to censure?]

[PADA: Great, this guy touches a young girl inappropriately, and he is now the minister over there!]

[PADA: Looks like they have to double people up since there is no one else to fill the slots.]

[PADA: Great, Kirtanananda's former henchmen like Umapati, Devamrta, Radhanath, and of course Kuladri, are always rewarded for "service well done" by their promoting Kirtanananda's regime. Maybe they will be buried next to Kirtanananda!]

[PADA: Right, thanks to PADA cramming the abuse of children program issue down their throats, they finally had to make some sort of "Children Protection Board." Problem is, there is hardly anyone going to their temples anymore, what to speak of children going to the temples? Its too little too late. Meanwhile, our Sunnyvale temple has kids bouncing all over the place, because people know where their kids are safe.

We even woke up fools like the Sanat, Mukunda and Prahlad team -- by informing then that there is a child abuse problem. Naturally, this team said we should kill -- and chop up -- Srila Prabhupada's children to fix the problem. And now the same team want us to work with Bhakta das to help them revive the New Vrndavana regime's leaders like Radhanatha swami (who was marrying off 13 years old girls to older men, at least so says some of the victims).

We have to agree, dead and chopped up children no longer misbehave! Fixes the problem every time! And that is what happens when they are licking the jack boots of the molester messiahs too long, they become infected with the same anti-children mentality. The good news is, their program to revive Bhakta das and Radhanath is not selling, there are no buyers for that agenda anymore.

Anyway too bad, we had to expose their anti-children process in order to save children from their handiworks. And guess what, some other victims want us to help them address this issue in court again, because they think the current situation is a cover up. Why? Because the same persons in charge when they were being abused are still in charge.]

[PADA: Disputes, for example the GBC saying that acharyas are often debauchees, are never resolved?]

[PADA: Here we go again, Prahladananda Swami is like the supersoul, he is everywhere!]

[PADA: Great, aren't these the same group of idiots who allowed -- if not put Kirtananada's carcass in a refigerator in Vrndavana -- so they could have Kirtanananda's carcass buried in a samadhi in Vrndavana.? Isn't this really the same "Vrndavana Samadhi Standing Committee" which buries homosexuals, pedophiles and criminals like Kirtanananda in "samadhis" in the holy dham? As one ex-kuli told PADA recently (a victim of living in New Vrndavana), "this is worse than burying a bag of dog stools in a holy spot to have that bag of stools worshiped." Yep, its better to worship a bag of dogs stools than a deviant. The good news is, more people are waking up to this bogus process every day. ys pd]

AND THIS: WHY IS A CRIMINAL BEING BURIED IN VRNDAVANA?