[PADA: Yes, the Bhakta das / BV Puri maharaja program also promoted various other GBC "gurus" and their programs in general, and especially people like GBC "guru" Gopal Krishna swami. In other words, Bhakta das / BV Puri and -- and all of these assembled folks actually -- supported the people who are spending $15,000,000 suing the ritviks. And Gopal Krishna swami helped Radhanath swami recently bury Kirtanananda swami (aka Keith Ham -- a known child molester and criminal) in "a samadhi" in the holy land of Vrndavana (see "Kirtanananda swami's samadhi" photo below). Yep, burying criminal deviants in the holy dham is the behavior of "sadhus." Who knew?

And now we find many of the other GBC's gurus, various Gaudiya Matha camps, as well as their vociferous henchmen like Sanat (Steve Voith), Mukunda (Mark Whitley?), Prahlad (Paul -- he has been promoting Bhakta das's video), Janardan, Swarupa Hebel et al. are all supporting Radhanath's program -- either direct or indirect -- because they ALL promote his program's main cheer leader namely -- Bhakta das.

Why are they all cheering this program on? Bhakta is trying to revive the worship of Radhanath swami as the next messiah of the world, except, isn't everyone ALREADY well aware of Radhanath's problems (thanks to us exposing that program)?

Isn't everyone also aware that since Bhakta das  / BV Puri have been good pals, supporters and cheer leaders of the bogus GBC guru people all along, that means, these people are still tethered to the criminal messiahs program? Everyone should read this PADA blog, then they would already know that BV Puri and Bhakta das have supported the GBC's guru program, and now some fools are working with Bhakta das to revive their bogus messiahs program?

Yep, people who bury known criminals and pedophiles in the holy dham need to be glorified. Not only some of the GBC's gurus / various Gaudiya Matha folks / but also Prahlad's (UK) team say we have to listen to Bhakta das, and they are even tape recording Bhakta as their big speaker now, because they want others to join in the cheer leading of their pedophile worship in the holy dham project.

As bad as this seems, this is all very good news for us however, since we need to see who is for the worship of deviants and pedophiles in the holy dham, and who is not, the air needs to be clarified.   So we are glad that the BV Puri / Radhanath / Bhakta das folks are identifying themselves -- so we now know who are in favor of promoting their "worship of child molester messiahs in samadhi."

As Sulochana das used to say to us all the time, this child molesting messiah's program is being enabled and empowered by all these cheer leaders, supporters, worshipers, boot lickers, lovers, and cover ups for that program. He would know, since he was assassinated by their party because he was exposing them. And now Bhakta das is trying to revive that program, lets revive Radhanath?

No wonder Bhakta das has been unhappy with ours and Sulochana's program, since our program has been exposing the molester pooja project which he is cheer leading. And no wonder the Bhakta das supporter folks are crying like little babies that we are exposing their real agenda, to revive their child molester pooja program, which they falsely claimed to have rejected, except now they are trying to sneak it back in because they never left that program.

This is all good news in one sense, because finally all the Radhanatha swami groupies are coming out of the woodwork and showing us who they really are, and assembling together so we can identify them. Radhanatha swami told us personally In 1986 "Kirtanananda is the purest devotee on the planet." So now we are making good progress, all these attacks on PADA -- ALL ALONG SINCE 1977 -- are rooted in our protesting this same group of people -- whom we basically shut down in 1986, but whom are now trying to make a comeback and revive Radhanath, their main Kirtanananda palanquin carrier / burial in the holy dham / right hand lieutenant of the worst case criminal molester gurus like Kirtanananda.

These birds are all together now in one big flock. The man who was Kirtanananda's palanquin carrier, the man who just now buried a known criminal pedophile in the holy dham, the man who apparently helped get Sulochana murdered, this is the hero of this Bhakta das group.

Bhakta das (William G Benedict) There are a lot of devotees who love Radhanatha Maharaja and he has inspired them to give their life to Krsna. To call him phony or anything is not the mood of a Vaisnava. Srila Puri Maharaja called him a "sadhu" or saintly person, in my presence several times. It is best to not say anything, if we can't say something good.

A das: I have seen his face book page and Radhanatha does not mention Hare Krishna even once.

B das: [MILLIONS of PEOPLE also LIKE MC DONALDS Hamburgers ...]

Bhakta das (William G Benedict) Radhanatha's disciples put up the FB pages, so if you like you can contact them with your observations and give positive suggestions. I attended a pandal program in Puri where there were about 5,000 devotees and he spoke 100% from Srila Prabhupada's books

A das: Bhakta das, have you read this: Problems with Radhanath swami: http://www.harekrsna.com/sun/editorials/08-12/editorials8857.htm

B das: Radhanatha swami speaks frequently in DC, and all their recent logos not only do not have any picture of Krsna, but also NO name of Krsna. I have asked them about this also without a reply. Just go to DC Iskcon site and see what I mean.

Bhakta das: William G Benedict I am not anyone's judge at all. I know only what Srila Puri Maharaja said to me about Radhanatha swami, and I have heard him speak recently, but not before. But I know how he lives which is very very simple and pure and he has control of his senses (tongue, belly, genitals).  Radhanatha swami had about 3500 of his disciples come to Rathayatra in Puri this year.

Janmastami dasa, who traveled with and assisted Tirtha while conducting surveillance on Sulochan in California, explained how he was recruited to assist in the elimination of Sulochan: "In January of 1986, on my return to New Vrindaban [after the Christmas marathon], I was ordered by Radhanath . . . not by Kirtanananda Swami, to terminate Sulochan. This happened with Tapahpunja Swami and Tirtha in November and December of 1985. I was on traveling sankirtan until Christmas and didn't get back to the farm until New Years. Immediately on our arrival at New Vrindaban, Radhanath sought me out and made arrangements for us to meet in his van, where he went through a prepared speech that he had delivered to Tirtha, Tapahpunja Swami and Kuladri many times before. Later talks with Tirtha confirmed this."(Janmastami dasa, "New Vrindaban History, for the Record", The Sampradaya Sun (December 22, 2006).

PADA: Correct, some of these GBC's gurus, and their Gaudiya Matha sympathizer programs, and their patron saint Bhakta das, as well as their vociferous henchmen like Sanat, Mukunda, Prahlad, Janardan, Swarupa Hebel et al. -- are all supporting Bhakta das, because Bhakta is trying to cover up the crimes of New Vrndavana, such as the mass child molesting, all sorts of other crimes, and the murder of Sulochana. These people are so foolish, they are even making videos of Bhakta das as their divine speaker we need to hear from now, and they are sending us the links to "hear from Bhakta das." So we can join them in worship of the dead bodies of child molesters in the holy land? Really? And they are crying like little babies that we have rejected their abominations upon the holy land program? Well too bad, even my neighbor's dog does not worship the dead bodies of child molesters "in samadhi," even dogs have more sense than this lot. 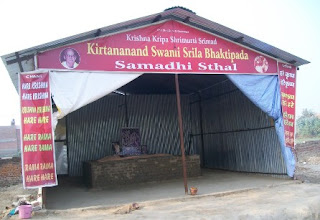 PADA: Anyway, all we can say to these folks is, we already exposed this Radhanath program so badly, it cannot be revived widely, it will only have a few blind followers. Its not going to be accepted widely. And with the recent (apparently) problems of Mahanidhi swami, the GBC's bogus guru program is simply -- more and more and more and more, on the ropes. And meantime, our program is moving ahead. ALSO! Special thanks to all the new PADA readers, our blog readership set a new record, and was way over any previous months in July 2013. Lets keep making progress! Jaya! ys pd