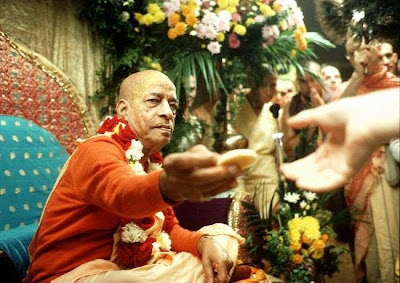 HARE KRSNA Dear devotees, The fall down of Mahanidhi swami has proven that the reasons given for the fall down of other iskcon gurus does not hold true. It has been always said that their gurus are falling down due to due to extensive preaching, fatigue, depression etc etc -- and that was the excuse when Prabhavishnu fell down. Now we find that Mahanidhi swami fell down from the platform of being an alleged "bhajananandi," chanting 64 rounds a day, and not travelling and preaching much, but always staying at radha kunda .So across all lines of activity there are fall downs. And this point points to the fact that they were never qualified or authorized by Srila Prabhupada to become acharyas, diksha gurus or "regular gurus." It Is THEIR OFFENCE TO SRILA PRABHUPADA THAT IS THE REAL CAUSE OF THEIR FALL DOWNS AND DEVIATIONS. (ys GSD)

I agree with this well said prabhu, he is still a vaishnava, he knows well how to take care of his bhajan, though he may have had fall a down from the varnaashrama, for some reason, ITS not important to me. I don't think Krishna would mind it, even if it is accidental fall-down, it happens. Examples are in srimad bhagavatham (Bharath maharaj) as i know him, he is an advanced vaishnava than the guys above who like to pinpoint other although they them self r not focused on their bhajan. MAHANITHI SWAMI knows the deep philosophy of gaudiya siddhanta, he knows what to do n how to go back to Godhead. Those who are pointing mistake or accidental fall down of others, 1st save yourself from going to hell doing becuz u r doing Vaishnava aparatha. That should be fine, take care of ur own devotional service guys, be honest. U know yourself how advance you are and you find yourself as the biggest problem for ur bhajan. And know u guys r giving reviews here, go go go at-least chant 1 round of proper harinam n stop being worried on

[PADA: Fine, except Bharata Maharaja was not an acharya when he fell down? He was a sadhana bhakta and his sadhana was disturbed, so he lost his thoughts of Krishna. That is not what happens to pure acharyas, they always think of Krishna is all circumstances because for starters, they are residents of Krishna loka. A resident of Krishna loka does not need to perform any sadhana practices to think of Krishna, he has already become fully Krishna conscious already. The college geometry professor does not need to study first grade mathematics, he already knows all of these things.

The ten offenses say that we cannot consider the guru as an ordinary man, or this is an offense to the holy name. So you are saying acharyas are ordinary men -- who can fall down and have illicit affairs, that is not our siddhanta. "Gurusuh narah matih, narakah sah," anyone who says guru is an ordinary man is a resident of naraka (hell).

Neither the guru is dependent on following the varnasrama system, he is a resident of Vaikutha. He is not part of the sadhaka system of varnasrama, although he may follow that to teach others, but he is not dependent on any external process. He does not have to "chant his rounds" to think of Krishna because he sees Krishna everywhere. The gopis are not getting up every day to chant their rounds, or else they will forget Krishna? You are mixing up (A) Neophytes engaged in sadhana bhakta with (B) the self realized pure parisad / associates of Krishna bhaktas, and that is why this is called narakah sah, hellish. This is sahajiya, the pure devotees (parisad associates of God) are falling down just like the sadhakas. No, this is an offense to the pure devotees, to say they are ordinary sadhakas. ys pd]

"As long as one follows in the footsteps of previous acaryas he is considered a pure devotee. When he doesn't follow he is no more pure devotee...." This is the amara ajnaya guru, is sanctioned by Srila Prabhupada, and causes a lot of trouble within Iskcon. The GBC has a managerial responsibility to deal with this serious issue in terms of policies. I can be an amara ajnaya guru also but don't have any desire in that type of service. Way too risky. on

What is happening with Mahanidhi swami?


[PADA: Right, as long as one follows he is protected, but shastra says that anyone who imitates guru is not following. He is deviating.]

If a man does good all his life, and does one bad thing, he will only be remembered for the bad thing. All those who condemn must remember that it also applies to them. on

[PADA: Fine, except gurus do not do bad things, Mahanidhi was never a guru.]

I am sorry to hear the recent news regarding Mahanidhi das. There are two people involved here and I think this woman should have protected this person in the renounced order by keeping herself to herself. I know this is not a popular view, but we ladies have a lot of power in this regard and it should not be used to exploit men in the renounced order. If that is a woman's desire she should go out and find a man outside who is single that would be the simpler option, why do women pursue such unsuitable men, I am frankly confused. on Krsna

[PADA: We cannot start to blame the women for making these sannyasas fall down? Women need to be protected by these men, and these men are instead exploiting these women. Then again, sometimes a criminal man will argue he raped a woman because "her skirt was too short." This is not a very good standard to set, blaming the woman. Those in the renounced order are simply not supposed to associate alone with women, that's all. Of course Mahanidhi was claiming to be above the rules for sannyasa because he is some sort of self-realized babaji, parisad associate of God, and divine acharya and messiah, so he was setting himself up to fail by claiming to be an acharya who is technically, above the regulations of ordinary sadhakas.

This is called sahajiya, they think they are above the sadhana regulations because they are some sort of divine beings. In any case, blaming the women for the fall of a sannyasa is like blaming a bottle of beer for making a person an alcoholic. Its sillyness. Mahanidhi said he is a guru, that means, he sees all women just as he see all other living entities, such as an ant, a dog, a frog, an elephant, indeed as a pure devotees sees all living entities in the universe all the way up to Lord Brahma,  they are all particles of God, he has no desire to exploit any living entity. Exploiting other living entities means -- we are still thinking we are the enjoyers and controllers of others, that means -- we are not yet gurus. Srila Prabhupada said these people should have got married, and he was right. We took Srila Prabhupada's advice, we got married ourselves, and just see all the troubles we were saved from! ys pd]

Sukadeva Goswami talks about gurus falling down 5,000 years ago, it happened in the past, it is happening in the present, and it will happen again in the future. The GBC can only MINIMIZE the fall downs. The best place to start is to very strictly implement for all sannyasis the example of Srila Bhaktisiddhanta Sarasvati Goswami Maharaja of NEVER EVER BEING ALONE WITH A WOMAN and only then can the GBC bring down the guru fall down rate from 50% to less than 10 or 5% on

[PADA: Sukadeva Goswami was talking about acharyas in the Vaishnava lineage falling down? Where?]

Geeta bidani is responsible for this just because she is rich and she is a director of Chenab plastics. She thinks she can get away with this .....but she has made great guru aprada and also cheated on her husband shame on her! At 45 yrs she wants all this. Rasrangini dd (geeta bidani) the lady responsible for mahanidhi swamis fall down is not divorced she is married is 45 yrs old has 2 children and is cheating on her husband and she is very rich. She is the director of CHENAB PLASTICS AND STAYS IN NOIDA. How could she do this with her family and guru shame!!!!!! on

Mahanidhi scandal expands (other ISKCON GBC gurus implicated) and on


Message from the GBC Executive Committee Re: Mahanidhi swami's Fall Down

[PADA: There is always a woman for any man, and a man for any woman, if they are looking for that connection and association. It does not matter how great or ugly they look, or how old they, there are even people getting married when they are 90 years old.

So this is what Srila Prabhupada calls -- the cheaters and the cheated. Yes, she wanted to be cheated, and yes, Mahanidhi wanted to have an affair, so they are both cheated. Except, Mahanidhi is the main person responsible because he is also misleading not only this lady but hundreds of others, so he is a maha-cheater. At least a karmi man who is a womanizing cheater only cheats a few people, whereas Mahanidhi has upset an entire religious institution and thousands of people, and yes he also upset this woman's family and her children and so forth. So he is creating way more damage than just the ordinary lusty man. He has also mis-represented Krishna and His parampara, and for that, one has to suffer very badly in the future. ys pd] 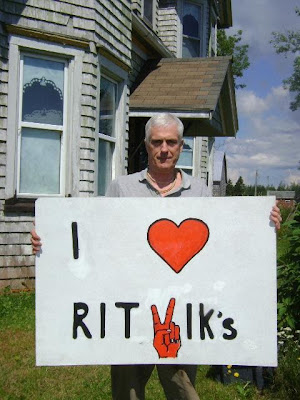 Natha Das is a Believer!