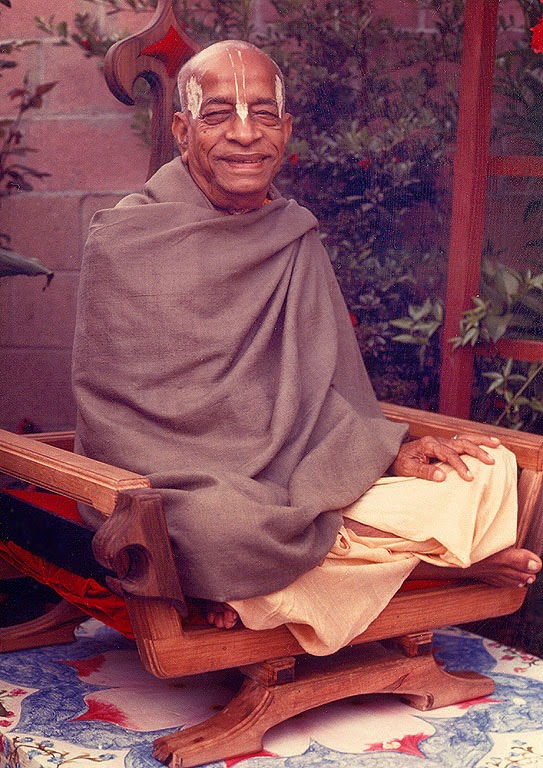 I rarely read anything that Rocana dasa writes anymore. Now and then I check the waters so to speak, to see if he is continuing to spiral downwards, or hopefully checked his downward momentum by divesting himself of his offensive attitude and thirst for glory. As ever pilot knows however, its hard to come out of a tail spin as Rocanas latest painful cry posted on the Sampraday Sun on April 10th, Deconstructing the Lilamrta - Part 55

BY: ROCANA DASA in which he tells us that all of the devotees who think that Srila Prabhupada is still alive are fools brings our attention to his statement:

Those devotees who like to adamantly state that Srila Prabhupada is 'still alive', and ISKCON should just go along as if that were the assumption, are fools. This is just one of innumerable circumstances where Srila Prabhupada stepped in and saved not only the money, but the movement. It was his ability to function in the real world and his perception about who was a devotee and who was basically a demon that saved the day, and was a great contributing factor in the amazing expansion of Krsna consciousness during that period, when Srila Prabhupada was directly overseeing of the movement. Of course, he is still with us in his vani legacy, but there is no replacing his actual physical presence with us to guide and solve problems, hands-on.

Although Rocana dasa throws in the last sentence in order to put a golden guild upon the turd that he has just dumped into our lap, his eagerness to get rid of Srila Prabhupada so that he can step up into his position, his anger and envy come through with such a stench that one has to wear a clothespin on ones nose to continue to read through the piece of crap. Rocana dasa, I am sorry to say, is beginning to look like just another Zonal Acharya wannabe, engaging in the same kind of wishful thinking as they do, wishing Srila Prabhupada dead and he like them seems to be suffering the same frustration from his and theirs inability to kill him.

We have of course the words of the the Vaisnava acaryas countering Rocanas claims that Srila Prabhupada is dead:

He reasons ill who tells that Vaishnavas die
When thou are living still in sound.
The Vaishnavas die to live
and living try to Spread a holy life around!

That Rocana dasa's intelligence has continued to be become even more and more degraded, stolen away by illusion is further empathized by the fact that he has become so idiotic as to think that the a key factor or reason that we need an Acharya is to be physically present in order to instruct us on how to conduct business deals, clean out ears or wipe our…..  Although he attempts to back peddle and cover his a** with some well chosen words after this idiotic statement, that he fails to provide the essential reasons why a spiritual master is needed (which is to direct us in how to perform devotional service) and how it is that Srila Prabhupada can no longer serve in that respect due to changes in real estate values, whatever, shows his point to be just another baited hook by which he intends to catch the innocent so as reel them in.

As far as such things as calculating such things as real estate values, dealing with crooks we have each other, still a society despite whats been done to it and as far as cleaning myself after I take a d**p I have a print out of Rocanas latest article for that.

And what we need an Acarya and initiating spiritual master for, Srila Prabhupada still is, we still have and by Krsnas mercy, we are going to keep him.

750716pc.sf Conversations
Reporter (2): What will happen to the movement in the United States when you die?
Prabhupada: I WILL NEVER DIE.
Devotees: Jaya! Hari bol! (laughter)
Prabhupada: I SHALL LIVE From MY BOOKS, AND YOU WILL UTILIZE.
Reporter (2): Are you training a successor?
Prabhupada: Yes, my Guru Maharaja is there. Where is my photo of Guru Maharaja? I think... Here is.
Indian Lady: ... is that spiritual master still guiding after death?
Srila Prabhupada: Yes, yes. Just like Krsna is guiding us, similarly spiritual master will guide us. (General lectures, 69/09/23)
Devotee: Srila Prabhupada when you're not present with us, how is it possible to receive instructions? For example in questions that may arise...
SRILA PRABHUPADA: Well the questions are answ... answers are there in my books.
(Morning Walk, Los Angeles, 13/5/73)

So utilise whatever time you find to make a thorough study of my books. Then all your questions will be answered. (Letter to Upendra, 7/1/76)

All glories to Srila Prabhupada.