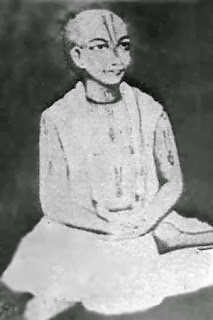 Since we belong to this chain of disciplic succession from Śrī Caitanya Mahāprabhu, this edition of ŚrīCaitanya-caritāmṛta will contain nothing newly manufactured by our tiny brains, but only remnants of food originally eaten by the Lord Himself. Lord Śrī Caitanya Mahāprabhu does not belong to the mundane plane of the three qualitative modes. He belongs to the transcendental plane beyond the reach of the imperfect sense perception of a living being. Even the most erudite mundane scholar cannot approach the transcendental plane unless he submits himself to transcendental sound with a receptive mood, for in that mood only can one realize the message of Śrī Caitanya Mahāprabhu. What will be described herein, therefore, has nothing to do with the experimental thoughts created by the speculative habits of inert minds. The subject matter of this book is not a mental concoction but a factual spiritual experience that one can realize only by accepting the line of disciplic succession described above. Any deviation from that line will bewilder the reader's understanding of the mystery of Śrī Caitanya-caritāmṛta, which is a transcendental literature meant for the postgraduate study of one who has realized all the Vedic scriptures such as the Upaniṣads and Vedānta-sūtra and their natural commentaries such as Śrīmad-Bhāgavatam and the Bhagavad-gītā.

Books : Sri Caitanya-caritamrta - 1975 Edition : Cc. Adi-lila : Adi 5: The Glories of Lord Nityananda Balarama : Adi 5.20 : PURPORT :Śrīla Narottama dāsa Ṭhākura, a great ācārya in the preceptorial line of Lord Śrī Caitanya Mahāprabhu,has said for our benefit that one can perfectly see the dhāmas only when one completely gives up the mentality of lording it over material nature. One's spiritual vision develops proportionately to one's giving up the debased mentality of unnecessarily enjoying matter. A diseased person who has become diseased because of a certain bad habit must be ready to follow the advice of the physician, and as a natural sequence he must attempt to give up the cause of the disease. The patient cannot indulge in the bad habit and at the same time expect to be cured by the physician. Modern material civilization, however, is maintaining a diseased atmosphere. The living being is a spiritual spark, as spiritual as the Lord Himself. The only difference is that the Lord is great and the living being is small. Qualitatively they are one, but quantitatively they are different. Therefore, since the living being is spiritual in constitution, he can be happy only in the spiritual sky, where there are unlimited spiritual spheres called Vaikuṇṭhas. A spiritual being conditioned by a material body must therefore try to get rid of his disease instead of developing the cause of the disease.

Śrīla Narottama dāsa Ṭhākura, who is famous for his poetic composition known as Prārthanā, has lamented in one of his prayers, "When will Lord Nityānanda be merciful upon me so that I will forget all material desires?" Śrīla Narottama dāsa Ṭhākura confirms that unless one is freed from material desires to satisfy the needs of the body and senses, one cannot understand the transcendental abode of Lord Kṛṣṇa, Vṛndāvana. He also confirms that one cannot understand the loving affairs of Rādhā and Kṛṣṇa without going through the direction of the six Gosvāmīs. In another verse Narottama dāsa Ṭhākura has stated that without the causeless mercy of Nityānanda Prabhu, one cannot enter into the affairs of Rādhā and Kṛṣṇa.

Books : Sri Caitanya-caritamrta - 1975 Edition : Cc. Adi-lila : Adi 7: Lord Caitanya in Five Features : Adi 7.17 : PURPORT In connection with verses sixteen and seventeen, Śrī Bhaktisiddhānta Sarasvatī Ṭhākura explains in his Anubhāṣya: "There are specific symptoms by which the internal devotees and the unalloyed or pure devotees are to be known. All unalloyed devotees are śakti-tattvas, or potencies of the Lord. Some of them are situated in conjugal love and others in filial affection, fraternity and servitude. Certainly all of them are devotees, but by making a comparative study it is found that the devotees or potencies who are engaged in conjugal love are better situated than the others. Thus devotees who are in a relationship with the Supreme Personality of Godhead in conjugal love are considered to be the most confidential devotees of Lord Śrī CaitanyaMahāprabhu. Those who engage in the service of Lord Nityānanda Prabhu and Lord Advaita Prabhu generally have relationships of parental love, fraternity, servitude and neutrality. When such devotees develop great attachment for Śrī Caitanya Mahāprabhu, they too become situated within the intimate circle of devotees in conjugal love." This gradual development of devotional service is described by Śrī Narottama dāsa Ṭhākuraas follows

"When will there be eruptions on my body as soon as I chant the name of Lord Caitanya, and when will there be incessant torrents of tears as soon as I chant the holy names HareKṛṣṇa? When will Lord Nityānanda be merciful toward me and free me from all desires for material enjoyment? When will my mind be completely freed from all contamination of desires for material pleasure? Only at that time will it be possible for me to understandVṛndāvana. Only if I become attached to the instructions given by the six Gosvāmīs, headed by Rūpa Gosvāmī and Raghunāthadāsa Gosvāmī, will it be possible for me to understand the conjugal love of Rādhā and Kṛṣṇa." By attachment to the devotional service of Lord CaitanyaMahāprabhu one immediately comes to the ecstatic position.

When he develops his love for NityānandaPrabhu he is freed from all attachment to the material world, and at that time he becomes eligible to understand the Lord's pastimes in Vṛndāvana. In that condition, when one develops his love for the six Gosvāmīs, he can understand the conjugal love between Rādhā and Kṛṣṇa. These are the different stages of a pure devotee's promotion to conjugal love in the service of Rādhā and Kṛṣṇain an intimate relationship with Śrī CaitanyaMahāprabhu

Cc. Adi-lila : Adi 7: Lord Caitanya in Five Features : Adi 7.74 The principles of the paramparā system were strictly honored in previous ages-Satya-yuga, Tretā-yuga and Dvāpara-yuga-but in the present age, Kali-yuga, people neglect the importance of this system of śrauta-paramparā, or receiving knowledge by disciplic succession. In this age, people are prepared to argue that they can understand that which is beyond their limited knowledge and perception through so-called scientific observations and experiments, not knowing that actual truth comes down to man from authorities. This argumentative attitude is against the Vedic principles, and it is very difficult for one who adopts it to understand that the holy name of Kṛṣṇa is as good as Kṛṣṇa Himself. Since Kṛṣṇa and His holy name are identical, the holy name is eternally pure and beyond material contamination.

It is the Supreme Personality of Godhead as a transcendental vibration. The holy name is completely different from material sound, as confirmed by Narottama dāsa Ṭhākura: golokera prema-dhana, hari-nāma-saṅkīrtana. The transcendental vibration of hari-nāma-saṅkīrtana is imported from the spiritual world. Thus although materialists who are addicted to experimental knowledge and the so-called "scientific method" cannot place their faith in the chanting of the Hare Kṛṣṇa mahā-mantra, it is a fact that simply by chanting the Hare Kṛṣṇa mantra offenselessly one can be freed from all subtle and gross material conditions. The spiritual world is called Vaikuṇṭha, which means "without anxiety." In the material world everything is full of anxiety (kuṇṭha), whereas in the spiritual world (Vaikuṇṭha) everything is free from anxiety. Therefore those who are afflicted by a combination of anxieties cannot understand the Hare Kṛṣṇa mantra, which is free from all anxiety. In the present age the vibration of the Hare Kṛṣṇa mahā-mantra is the only process that is in a transcendental position, beyond material contamination. Since the holy name can deliver a conditioned soul, it is explained here to be sarva-mantra-sāra, the essence of all Vedic hymns.

Books : Sri Caitanya-caritamrta - 1975 Edition : Cc. Adi-lila : Adi 11: The Expansions of Lord Nityananda : Adi 11.32 : The village of Maheśa Paṇḍita, which is known as Pālapāḍā, is situated in the district of Nadia within a forest about one mile south of the Cākadaha railway station. The Ganges flows nearby. It is said that formerlyMaheśa Paṇḍita lived on the eastern side of Jirāṭ in the village known as Masipura or Yaśīpura, and when Masipura merged into the riverbed of the Ganges, the Deities there were brought to Pālapāḍā, wh ich is situated in the midst of various villages such as Beleḍāṅgā, Berigrāma, Sukhasāgara, Cānduḍe and Manasāpotā. (There are about fourteen villages, and the entire neighborhood is known as Pāñcanagara Paragaṇā.) It is mentioned that Maheśa Paṇḍita joined the festival performed by Śrī Nityānanda Prabhu at Pāṇihāṭī.Narottama dāsa Ṭhākura also joined in the festival, and Maheśa Paṇḍita saw him on that occasion. In the temple of Maheśa Paṇḍita there are Deities of Gaura-Nityānanda, Śrī Gopīnātha, Śrī Madana-mohana and Rādhā-Govinda, as well as a śālagrāma-śilā.

Books : Sri Caitanya-caritamrta - 1975 Edition : Cc. Madhya-lila : Madhya 18: Lord Sri Caitanya Mahaprabhu's Visit to Sri Vrndavana : Madhya 18.49 : PURPORTŚrī Lokanātha Gosvāmī was a personal associate of ŚrīCaitanya Mahāprabhu and a great devotee of the Lord. He was a resident of a village named Tālakhaḍi in the district of Yaśohara in Bengal. Previously he lived in Kācnāpāḍā. His father's name was Padmanābha, and his only younger brother was Pragalbha. Following the orders of Śrī Caitanya Mahāprabhu, Śrī Lokanātha went toVṛndāvana to live. He established a temple named Gokulānanda. Śrīla Narottama dāsa Ṭhākura selectedLokanātha dāsa Gosvāmī to be his spiritual master, and he was his only disciple. Because Lokanāthadāsa Gosvāmī did not want his name mentioned in Caitanya-caritāmṛta, we do not often see it in this celebrated book. On the E.B.R. Railroad, the Yaśohara station is located in Bangladesh. From the railway station one has to go by bus to the village of Sonākhāli and from there to Khejurā. From there one has to walk, or, during the rainy season, go by boat to the village of Tālakhaḍi. In this village there are still descendants of Lokanātha Gosvāmī's younger brother.

[PADA: Interesting highlights of his life:]