Krishnas in Russia Respond To Allegations Against ISKCON 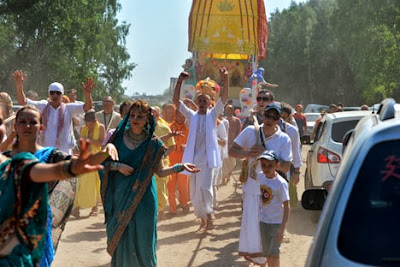 Then, the first thing the GBC did after 1977 was to say -- that the worship of Jesus is totally bogus, post samadhi, posthumous, and in sum worship of Jesus is the postmortem worship of a dead person. And the road to salvation is instead, we need to worship the GBC's illicit sex with men, women and children messiahs instead of pure devotees like Jesus.

Then they wondered, why is the religion being persecuted? Well, if you are every single day attacking the worship of pure devotees as bogus, and you are telling people they have to worship a pack of debauchees as their path to God, your religion will not be accepted, or protected by the Lord, just exactly as Srila Prabhupada warned us -- would happen.

The post 1977 GBC has gone way out of their way to make sure the public thinks the Krishna religion is based on the worship of illicit behavior, and criminality, then they wonder why their concocted religion is being rejected and harassed by the authorities?

The GBC wondered the same think when New Vrndavana was raided, how come we are being persecuted by the government? Well maybe if you did not enforce the worship of deviants by using contrived bannings, beatings and violence, then you would not have these problems? The GBC thinks they can enforce the worship of deviants and then be accepted by the public and the government authorities, nope, Srila Prabhupada said if you do that, you will be finished, just as the Gaudiya Matha fell down into the same bogus process of making false messiahs.

The GBC thinks they can make a criminal mayhem program in the USA and then sneak off to other places and start fresh over there and their criminal regime's past will never catch up to them. Umm, that is what criminals do all the time, they leave the USA and go to places like Latin America, but guess what, they can still be arrested because their past may become known at any time. Simply leaving the scene of the crime and escaping to another place, is no guarantee that the past will not overtake you over there eventually. They have to clean the slate and openly state that their worship of deviants program is bogus, and start to worship the pure devotee, then they might get a shred of credibility, and resultant protection from the Lord.