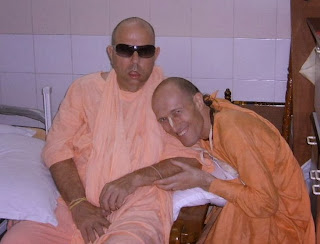 BVKS: "... Through the parampara.I’ll take you to my guru and then he takes you to his guru and like this the mercy comes down, and we bring people in and offer them up."

[PADA: Bhakti vikas swami's program says that their gurus are -- (a) deviating, unable to attend the temple programs, not chanting their rounds, often found engaged in illicit sex with men, women and children etc. -- therefore (b) they can act as parampara members, diksha gurus, and offer the mass of public's services to God. How can impure people take the post of messiah / acharya and offer the services of others to God? Where is this stated in shastra?

BVKS: "And the guru is the sum and substance of all the demigods and actually the guru is…the Vaisnava guru is even more important than the demigods in as much as they both accept worship."

BVKS: "And I’m saying that and I am a Vaisnava guru."

[PADA: Because you are voted in as guru by the same people who vociferously orchestrated the debauchee guru program, and even had some of us killed for protesting the worship of your criminals and molesters messiahs?]

BVKS: "So the acarya that Krishna is speaking about when he’s instructing Uddhava, that "the acharya is as good as Me," is not be disrespected in any way, is the forest rishi guru. And of course this applies to all those, all Vaisnava gurus."

[PADA: BVKS makes it clear that he considers himself the next guru in the parampara (disciplic succes­sion) after Srila Prabhupada, who should be worshpped and treat­ed just like every other member in the parampara. And consequent­ly he has attained the position of being more powerful than the sum total of the demigods, to be treated as being good as Krishna. Then he says, the GBC gurus might have to be exposed for deviations on the internet, because the GBC does not police its debauchee and deviant gurus? So the guru is not to be disrespected, because he is as good as God, rather he is to be exposed for being a deviant in public on the internet?]

BVKS: "My Vyasa-puja ... So you may think, well, what is my qualification to accept the honor and affection that you are offering to me. Well, that is my qualification, that if I can glorify Prabhupada then that’s the qualification ...actually, the er... I’m not qualified, intrinsically, but qualified because I can point, “here is Prabhupada, and follow his instructions, and ask you to have faith in what Srila Prabhupada has given.” (BVKS, “Vyasa-Puja” Lecture, Tirupati, January 5th, 2008)

[PADA: Supporting an illicit sex guru program is "following Srila Prabhupada"? No, its violating everything he ever said.]

BVKS: "Monitor guru" seems to be the most suitable position for me — an older student guiding a younger one, who may well surpass the monitor as he grows older but will always remain faithful and respectful to him; the teacher of both is the same. "

[PADA: OK, except BVKS just said he is the sum total of the demigods? A classroom monitor is not the same as the professor. In any case, if all the Srila Prabhupada devotees were intended to act as monitors for others, why are they being banned, beaten and driven out of ISKCON on a rail?]

BVKS: "Nikunja-yuno" etc. in relation to me? Not even a joke; it’s ridiculous. Do I have to pretend to have attained manjari - hood? What are those initiated by our God brothers supposed to think when they sing ‘nikunja-yuno‘ and‘romanca kalpa’, etc. when the guru can’t even get up for mangala-arati? These matters need careful looking into.” (BVKS, Vedic Village Review, Issue 14, September, 1990)

[PADA: OK except, people in ISKCON are singing these songs to the GBC's gurus? If this is wrong, why hasn't BVKS made a clear position paper on this topic? BVKS is claiming the GBC gurus are both sum total of the demigods, rati keli siddhas, simultaneously, only kansithas, neophytes, and classroom monitors? Worse, some of his gurus cannot even get up in the morning to do the daily sadhana? They are not even sadhakas?

The GBC gurus have their disciples sing “Nikunja-yuno” and “roman­ca kalpa” to them every morning at mangala-arati, BVKS says -- this is "not even a joke” but “ridiculous.” Yet BVKS  is also agreeing with, and fully supporting the disciples singing these prayers to him and the other ISKCON GBC gurus every morn­ing during mangala-arati. He has not wrote a paper explaining how this deviation has to be corrected?]

BVKS: ... "So how are we going to understand this point that Krishna in the Bhagavad-gita -which is the book in which He explains the highest truth which we all have to understand to attain the highest spiritual platform - He contradicts Himself."

[PADA: Krishna contradicts Himself? No, BVKS contradicts himself, he says the GBC are sum total of the demigods gurus, they are members (not ritvik representatives) of the paramara, they are also kanisthas and monitors, and they also -- often cannot even follow the basic sadhana and get up in the morning? So they are sum totals of the demigods, and not even kanisthas, at the same time? Krishna also contradicts Himself? Srila Prabhupada and Krishna contradict themselves, and are in the same category as BVKS and his beloved GBC?]

BVKS: “As the GBC cannot be expected to take needed action to stop deviations before they become disasters, it seems the only recourse for responsible members of ISKCON is to take the matter to gutter level, i.e. the internet. Painful and undignified as such public laundry-washing may be, it might at least create an awareness of deviations and warn devotees not to get sidelined into weird cults going on in the name of ISKCON.” (HH Bhakti Vikash Swami, 23/03/03, PAMHo Text: 7160561)

[PADA: BVKS herein supports PADA. He says our only recourse is to do what PADA does, take the deviations of his guru parampara to the internet, since the GBC fails to act. At the same time, if this is a guru parampara, how is it full of deviations? And why would anyone need to expose its deviations?]

BVKS: “So one other argument of the ritvik-vadis is they say, “Well, we have to follow sadhu, sastra and guru. And you’re saying that Prabhupada just introduced this system which is not according to sastra. And they’ll say, ‘Well Prabhupada changed so many things. He’s a great acarya. He can change so many things.’ ” In this way they demonstrate their pathetic ignorance of the principles of bhakti-tattva”.

[PADA: Saying that gurus are not deviants and debauchees is "ignorance of the principles of Bhakti."? Sheesh pilgrims! ys pd]