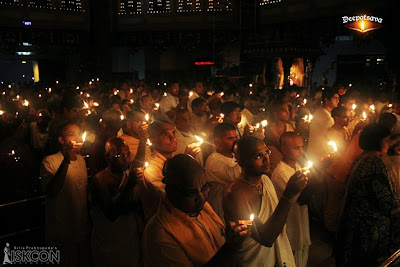 Please Accept My Most Humble Obeisances, All Glories to Srila Prabhupada,

Well to tell you the truth, ISKCON's illegal profit, distinction and adoration guru club will keep on going as long as the fake reflection is kept fed by the three gunas of the material nature. All these unworthy usurpers of the transcendental position of SRILA PRABHUPADA in iskcon as diksa guru are very sinful because they make innocent sadhaka followers worship the fake reflection of the truth, trapped in the bodily concept of life through this illegal guru profiteers club, based on the phalguni tatha mahata jivo jivasya jivanam -- the weakest become food for the strongest.

The law of nature is that the strong want to feed on a weaker life form of life. All of these deviants of SRILA PRABHUPADA instructions became the strongest link in fiskcon due to the super contaminated influences of the false reflections of kali yuga. They got the karma of being the fake reflections of their blind disciples as well, like that Kesava bharati swami, who was a intimate friend of Tamala asura pada, who was discussing secretly in Sri Vrindavan dham the way to get rid of SRILA PRABHUPADA and take over his iskcon.

He took sannyasi again by the Gunda Body Commission in fiskcon, this so called guru sannyasi used to spend all the lakshmi of the sankirtan temple from Spain to go to prostitutes, where he was addicted because of his offenses to the lotus feet of our beloved acharya HDG ACBSP. I saw a video a little while ago where some donkey disciples were washing KBS feet, and this is still very offensive because that ceremony is only for the paramahamsas like HDG ACBSP, it is not for rascals who poisoned our guru maharaj to take over iskcon, fleece the devotees, and usurp the position of SRILA PRABHUPADA in iskcon as diksa guru.

Actually there are so many fake things around us especially in this dark age of quarrel and hypocrisy, its not easy to find good satsang because almost everything and everyone got contaminated by the degraded influences of kali. Only the divyan jnana perfect changeless trancendental knowledge of SRILA PRABHUPADA books is eternally pure, therefore whoever wants become pure will have to take complete shelter in SRILA PRABHUPADA books and not in all these fake pretenders whose business is to make profit by exploiting the weakest, therefore both of them will get more entagled in the false reflection of the truth without any hope to come out from this pukka double -- "kama rupam durasadam" prison house, which keeps everyone more trapped in this "yantrarudhani mayaya," unwanted body machine, mades by gunas and karmas, ys ys haribol
Posted by krishna1008 at 6:36 AM