History Of The Discovery of Radha Kunda 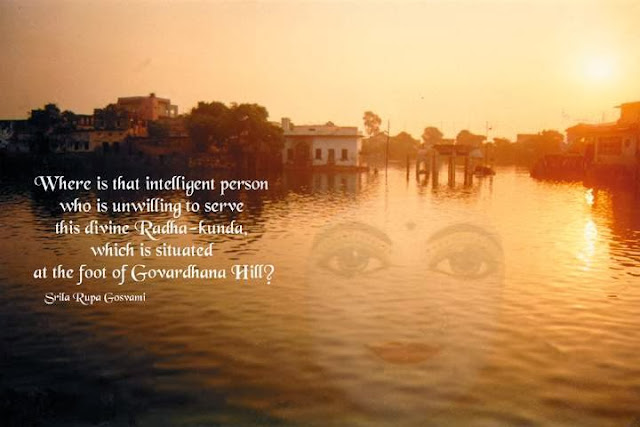 [PADA: Thanks to Yasodananda das for these quotes]

Srila Prabhupada explains the history of the discovery of Radha-Kunda:

This is one of the brilliant examples of how the Gosvāmīs excavated lost places of pilgrimage. Similarly, it is through the endeavor of the Gosvāmīs that all the important temples at Vṛndāvana were established. Originally there were seven important Gauḍīya Vaiṣṇava temples established in Vṛndāvana, namely, the Madana-mohana temple, Govinda temple, Gopīnātha temple, Śrī Rādhāramaṇa temple, Rādhā-Śyāmasundara temple, Rādhā-Dāmodara temple and Gokulānanda temple.

Distinguishing between pure devotees and internal or confidential devotees, Śrī Rūpa Gosvāmī, in his book Upadeśāmṛta, traces the following gradual process of development. Out of many thousands of karmīs, one is better when he is situated in perfect Vedic knowledge. Out of many such learned scholars and philosophers, one who is actually liberated from material bondage is better, and out of many such persons who are actually liberated, one who is a devotee of the Supreme Personality of Godhead is considered to be the best. Among the many such transcendental lovers of the Supreme Personality of Godhead, the gopīs are the best, and among the gopīs Śrīmatī Rādhikā is the best. Śrīmatī Rādhikā is very dear to Lord Kṛṣṇa, and similarly Her ponds, namely, Śyāma-kuṇḍa and Rādhā-kuṇḍa, are also very dear to the Supreme Personality of Godhead.

"Śrī Caitanya Mahāprabhu then marked His body with tilaka made from the mud of Rādhā-kuṇḍa, and with the help of Balabhadra Bhaṭṭācārya, He collected some of the mud and took it with Him"

Prabhupāda: Yes. The ācārya or gosvāmī, their business is... Just like our ācāryas, sad-gosvāmī, they left their service, big service, ministership, and by the order of Caitanya Mahāprabhu they went to Vṛndāvana. But what for, going to Vṛndāvana and sleeping and eating? No, no, not for that purpose. They, rather at home they had time to sleep more, but when they went to Vṛndāvana they were sleeping only one half-hour to two hours only. At the present moment when a man becomes old, he requires more rest. But according to Vedic civilization, no more rest, more work, more work. But these gosvāmīs, they were deputed by Lord Caitanya Mahāprabhu... At that time this Vṛndāvana, which you have seen, now it is nice city, but during the time of Caitanya Mahāprabhu it was a big field only, that's all, nothing was there. Everything, all Kṛṣṇa's līlā were vanished. Not vanished, it was not visible. Caitanya Mahāprabhu saw one small hole, little water, and He indicated, "This is Rādhā-kuṇḍa."

Then Rādhā-kuṇḍa was discovered. So these Gosvāmīs were working very hard. And special business was there, nana-śāstra-vicaraṇaika-nipunau. They were very expert in scrutinizingly studying all the Vedic literatures. Nana-śāstra, śāstra, not ordinary knowledge. They were also reading(?). Nana-śāstra-vicaraṇaika-nipunau. Just like Rūpa Gosvāmī has quoted so many verses, so many incidences from different śāstras, how the biography is stated there in compiling Bhakti-rasāmṛta-sindhu, which we've translated, Nectar of Devotion. So this Nectar of Devotion, because formerly whatever is given under Vedic evidence it will be accepted always correct. Therefore nana-śāstra-vicaraṇaika. They used to collect all the Vedic references and put into Bhakti-rasāmṛta-sindhu to establish that bhagavad-bhakti, devotional service to the Lord, is the ultimate goal of life. Nānā-śāstra-vicāraṇaika-nipuṇau sad-dharma-saṁsthāpakau. Sad-dharma. Not asad-dharma. Asad-dharma means referring to the body, karma-kāṇḍīya. Karmīs they are engaged in asad-dharma not sad-dharma. Because the body is asat. antavanta ime dehā nityasyoktāḥ śarīriṇaḥ [Bg. 2.18].