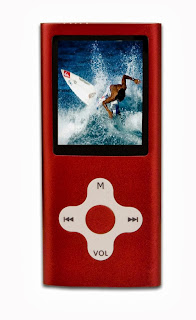 PADA Editor bought one of these a long time ago, and now its on Amazon com for only $19.00. You can also get it for $25.00 from Walmart. Its very easy to transfer MP3 files into the device. We are dragging various kirtana and lecture MP3 downloads over to our windows desktop, and then transferring the files by simply dragging them over to the Eclipse. It has a "music" files location and you just drag them into there. Mine has lasted about a year and its still working good. You can put tons of kirtans on here, and its still has plenty of storage space left over.

You can also get a micro - memory card if you need more storage.

We did have a similar one before this one, made by COBY, and it was very cranky because the transfer of files feature did not always work, thus some things would not play. And then the left stereo sound feature went out totally -- in not even a year. The Eclipse is apparently a better machine and its cheaper. Its also much nicer than the I-pod shuttle, which has no window to see whats playing. Right now we just got another one of these, so that when the battery on one goes out, its got a back up. There are a few glitches here and there, but overall its been working great.

You can also get a cable to plug this into your car stereo system's "aux" jack, and listen to this in any modern car, since most of them have an "aux" cable hook up. You can also walk around your house listening to your own tunes on the supplied ear buds, and sing along while you sweep your house. Hee hee! Anyway, for those of you on a budget, this might be just the item you need. Its also a great gift to load this up with kirtanas, lectures etc and give it to someone. Really, you cannot get something that works this good for any cheaper. ys pd
====================================

http://www.indiawest.com/news/14121-bls-out-to-lunch--say-travelers-frustrated-with-new-visa-service.html
Posted by krishna1008 at 5:42 PM