PADA Defeated the IRM on the Poison Issue

PADA: Krishna Kanta Desai (IRM) and his vociferous supporters like Prahlad das have combined to try to forge a compromise with the GBC on the poison complaint from Srila Prabhupada issue. This attempt to defeat the words of the pure devotee and to suppress PADA has simply back-fired on these people, starting first of all when most the people in the IRM quit their group, and went off to work with PADA on this issue in 1997. Its time to make an official statement, these people have been totally defeated by PADA.

And now, every single day, we are getting more people to agree with us on this issue. And thus there is a constant increase in "poison case" documentation sites, audio sites and etc. In sum, there is an increased interest in the poison issue, and what was being said at the time by these leaders like Tamal Krishna swami (pictured below on left, Kirtananda swami is on right).

Yep, how did you guess, the GBC buried both these deviants pictured below in "samadhis" in the holy dham, polluting the sacred leela areas of Lord Krishna. All this of course will be undone by our future Prabhupadanugas, these samadhis will be dug up and the contents will be placed in areas where dogs pass stools in Vrndavana. Rest assured, future Prabhupadanugas will clear all these issues up later on, including the poison issue, changed books issue, bogus appointment issue, bogus samadhis issue, etc. 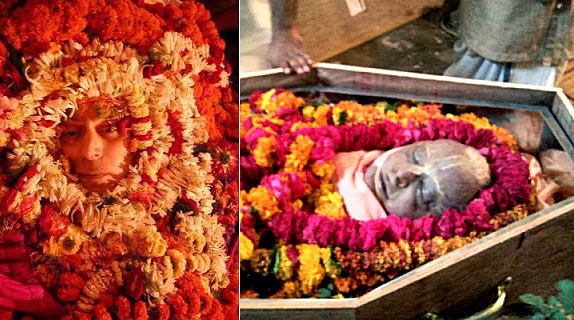 Worse, the IRM wrote to tell us that these statements like this one "put the poison in different containers" is "normal and not alarming." Really? "Put the poison in different containers" is not alarming, when the person who is receiving what is in the containers (Srila Prabhupada) says, he is being given poison? Why are Krishna Kanta and his sidekicks like Prahlad das licking the jack boots of the poisoners party, by suppressing the complaints from the pure devotee by attacking PADA? When are they going to admit this is a serious complaint from the pure devotee, and quit defending the Tamal party?

Meanwhile, we are getting more and more documentation proving that the complaint is valid:

Of course the IRM and Prahlad also complain that we got Tamal to go to India, where he was killed when he went to a meeting to discuss how to control the poison issue and the molesting issue, being forwarded by PADA:

This is another sign they are defeated, they are angry we not only exposed Tamal, but took Tamal out of the ISKCON control seat. Anyway, here is a brief commentary provided by Mahesh Raja and other Prabhupadanugas on this issue:

Tamal Krsna Swami (+1946-2002), the “living guru”-advocate, now a dead guru, on his final way to his grave for burial of his corpse. Tamal Krsna will always be remembered by those who have been abused under him and kicked out for opposing his false guru system:

Tamal Krsna has deceived the whole devotee community with his guru-successor-hoax. After he was banned by ISK’CON he admitted that he has cheated and lied, saying: “Actually, Prabhupada never appointed any gurus. He didn’t appoint eleven gurus. He appointed eleven ritviks. He never appointed them gurus“. (Topanga Canyon Pyramid House Talks)

The same lies and deception Tamal Krsna also employed in the poisoning of Srila Prabhupada. Although Nityananda says in his book “Someone Has Poisoned Me“, that we do not exactly know who is the culprit in giving poison to Srila Prabhupada, still from analysing the audio tapes now (after 37 years) we do know who has given poison:

This is not a whisper – these words are clearly audible, spoken by Tamal Krsna. It is interesting to note that even though the transcription of this section of the audio tape was transcribed into the BBT Folio, this sentence was omitted. Why was this sentence omitted? How will BBT / Bhaktivedanta Archives officials explain this mystery?

Note: sometimes some devotees think that how is it that those that gave Poison to Srila Prabhupada THE PURE DEVOTEE, took over his temples usurped money, his disciples, disobeyed and discarded the July 9th 1977 Ritvik Order, usurped the BBT, changed his books, yet nothing seems to be happening to them? We have to see THE PLAN of Lord Krsna. Krishna does NOT forget any insult, torture, ill-treatment to his PURE devotee Srila Prabhupada.

The situation with Tamal Krsna was just ONE incident of HOW he was taken out in an accident (Tamal was the one who whispered “PUT THE POISON IN THE MILK“). The rest are still in awaiting Lord Nrsimhadeva’s plan: A SINFUL MAN WHO ACTS AGAINST THE LAWS OF NATURE MUST BE PUNISHED, BUT SOMETIMES HE IS GIVEN A CHANCE TO PLAY, EXACTLY LIKE HIRANYAKASIPU WHEN HE WAS RELEASED FROM THE HANDS OF NRSIMHADEVA. HIRANYAKASIPU WAS DESTINED TO BE ULTIMATELY KILLED BY NRSIMHADEVA, BUT JUST TO SEE THE FUN, THE LORD GAVE HIM A CHANCE TO SLIP FROM HIS HANDS.

SB 7.8.26 Lord Nrsimhadeva Slays the King of the Demons

O Yudhisthira, O great son of Bharata, when Lord Nrsimhadeva gave Hiranyakasipu a chance to slip from His hand, just as Garuda sometimes plays with a snake and lets it slip from his mouth, the demigods, who had lost their abodes and who were hiding behind the clouds for fear of the demon, did not consider that incident very good. Indeed, they were perturbed.

When Hiranyakasipu was in the process of being killed by Lord Nrsimhadeva, the Lord gave the demon a chance to slip from His clutches. This incident was not very much appreciated by the demigods, for they were greatly afraid of Hiranyakasipu. They knew that if somehow or other Hiranyakasipu escaped from Nrsimhadeva’s hands and saw that the demigods were looking forward to his death with great pleasure, he would take great revenge upon them. Therefore they were very much afraid.

SB 7.8.27 Lord Nrsimhadeva Slays the King of the Demons

When Hiranyakasipu was freed from the hands of Nrsimhadeva, he falsely thought that the Lord was afraid of his prowess. Therefore, after taking a little rest from the fight, he took up his sword and shield and again attacked the Lord with great force.

When a sinful man enjoys material facilities, foolish people sometimes think, “HOW IS IT THAT THIS SINFUL MAN IS ENJOYING WHEREAS A PIOUS MAN IS SUFFERING?” BY THE WILL OF THE SUPREME, A SINFUL MAN IS SOMETIMES GIVEN THE CHANCE TO ENJOY THE MATERIAL WORLD AS IF HE WERE NOT UNDER THE CLUTCHES OF MATERIAL NATURE, JUST SO THAT HE MAY BE FOOLED. A SINFUL MAN WHO ACTS AGAINST THE LAWS OF NATURE MUST BE PUNISHED, BUT SOMETIMES HE IS GIVEN A CHANCE TO PLAY, EXACTLY LIKE HIRANYAKASIPU WHEN HE WAS RELEASED FROM THE HANDS OF NRSIMHADEVA. HIRANYAKASIPU WAS DESTINED TO BE ULTIMATELY KILLED BY NRSIMHADEVA, BUT JUST TO SEE THE FUN, THE LORD GAVE HIM A CHANCE TO SLIP FROM HIS HANDS.

Queen Draupadi had a beautiful bunch of hair which was sanctified in the ceremonial function of Rajasuya-yajna. But when she was lost in a bet, Duhsasana touched her glorified hair to insult her. Draupadi then fell down at the lotus feet of Lord Krsna, and Lord Krsna decided that all the wives of Duhsasana and company should have their hair loosened as a result of the Battle of Kuruksetra. Thus after the Battle of Kuruksetra, after all the sons and grandsons of Dhrtarastra died in battle, all the wives of the family were obliged to loosen their hair as widows. In other words, all the wives of the Kuru family became widows because of Duhsasana’s insulting a great devotee of the Lord. THE LORD CAN TOLERATE INSULTS UPON HIMSELF BY ANY MISCREANT BECAUSE THE FATHER TOLERATES EVEN INSULTS FROM THE SON. BUT HE NEVER TOLERATES INSULTS UPON HIS DEVOTEES. BY INSULTING A GREAT SOUL, ONE HAS TO FOREGO ALL THE RESULTS OF PIOUS ACTS AND BENEDICTIONS ALSO.

As declared in Bhagavad-gita, the Lord appears in the mortal world to execute His much-needed mission of killing the miscreants and giving protection to the suffering faithful. In spite of that mission, Lord Krsna tolerated the insult to Draupadi by the Kurus and the injustices perpetrated against the Pandavas, as well as insults to Himself. THE QUESTION MAY BE RAISED, “WHY DID HE TOLERATE SUCH INJUSTICES AND INSULTS IN HIS PRESENCE? WHY DID HE NOT CHASTISE THE KURUS IMMEDIATELY?” WHEN DRAUPADI WAS INSULTED IN THE ASSEMBLY BY THE KURUS BY THEIR ATTEMPT TO SEE HER NAKED IN THE PRESENCE OF ALL, THE LORD PROTECTED DRAUPADI BY SUPPLYING AN UNLIMITED LENGTH OF CLOTHING. BUT HE DID NOT CHASTISE THE INSULTING PARTY IMMEDIATELY. THIS SILENCE OF THE LORD DID NOT MEAN, HOWEVER, THAT HE EXCUSED THE OFFENSES OF THE KURUS. THERE WERE MANY OTHER KINGS ON EARTH WHO HAD BECOME VERY PROUD OF THREE KINDS OF POSSESSIONS–WEALTH, EDUCATION AND FOLLOWERS–AND THEY WERE CONSTANTLY AGITATING THE EARTH BY MOVEMENTS OF MILITARY STRENGTH. THE LORD WAS JUST WAITING TO GET THEM TOGETHER ON THE BATTLEFIELD OF KURUKSETRA AND KILL THEM ALL AT ONE TIME, JUST TO MAKE A SHORT-CUT IN HIS KILLING MISSION. Godless kings or heads of state, when puffed up by advancement of material wealth, education and increase of population, always make a show of military strength and give trouble to the innocent. When Lord Krsna was personally present, there were many such kings all over the world, and He thus arranged for the Battle of Kuruksetra.