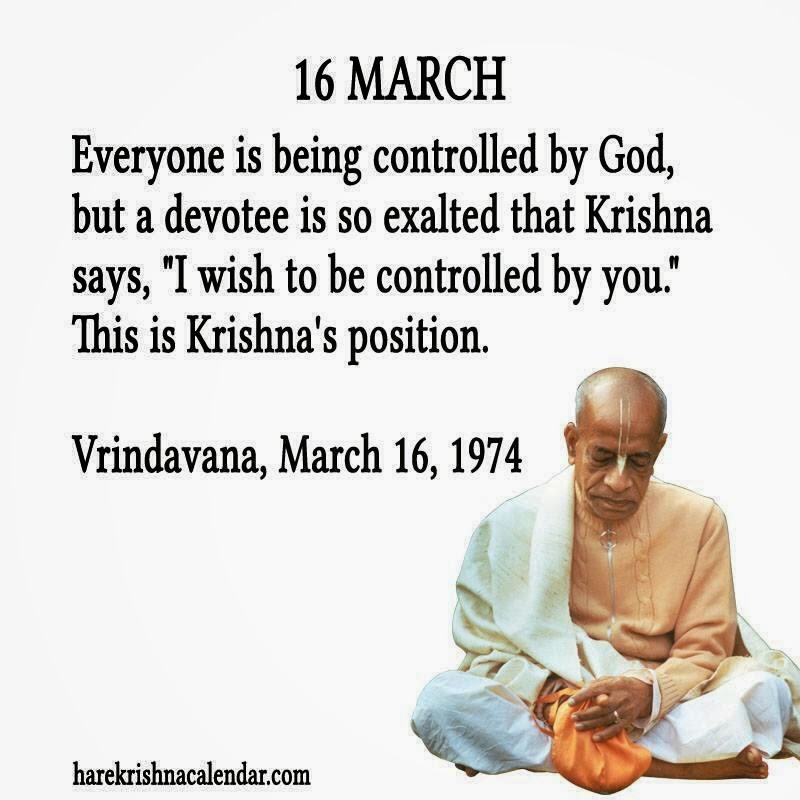 [PADA Note: Many of the official disciples of Srila Prabhupada never met him in person. And among the many who did see him in person, most were only able to see him rarely, for example -- while he was giving a lecture in a temple program etc. Only a few disciples got into his room and had personal meetings with him.

Then again, some of the people who had "direct personal association" -- seem to have later on become deviants, because they did not absorb his instructions. The real connection between the guru and the disciple is when the disciple follows the instructions (vani seva) of the guru.

Many of our NEWER Prabhupadanugas, who never even met Srila Prabhupada in person, often follow the instructions way better than a number of those who had "direct personal association." Thus the real connection is with -- the words and instructions of the guru -- not merely by being in his physical association.]

Narayana: So those disciples who don't have opportunity to see you -- or speak with you...
Prabhupada: That he was speaking, vani and vapuh. Even if you don't see his body, you take his words, vani.
Narayana: But how do they know they're pleasing you, Srila Prabhupada?
Prabhupada: If you actually follow the words of guru, that means he is pleased. And if you do not follow, how he can be pleased?
Sudama: Not only that, but your mercy is spread everywhere, and if we take advantage, you told us once, then we will feel the result.
Prabhupāda: Yes.
Jayadvaita: And if we have faith in what the guru says, then automatically we'll do that.
Prabhupada: Yes. My Guru Maharaja passed in 1936, and I started this movement in 1965, thirty years after. Then? I am getting the mercy of guru. This is vani. Even the guru is not physically present, if you follow the vani, then you are getting help.
Sudama: So there's no question of ever separation as long as the disciple follows the instruction of guru.
Prabhupada: No. Cakhu-dan dilo jei... What is that, next one?
Sudama: Cakhu-dan dilo jei, janme janme prabhu sei.
Prabhupada: Janme janme prabhu sei. So where there is separation? Who has opened your eyes, he is birth after birth your prabhu.
Paramahamsa: You never feel any intense separation from your spiritual master?
Prabhupada: That you do not require to question. (end)
Morning Walk -- July 21, 1975, San Francisco
Posted by krishna1008 at 10:35 AM