Prahlad das: I have NEVER supported any 'neo-Nazi' program. I don't support any now and I never will. It is only PADA's continuous insane LIES about me that say otherwise. Jaya Prabhupada! 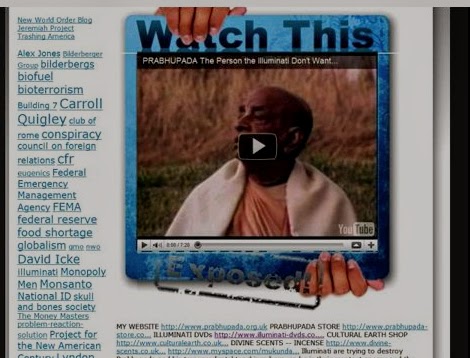 [PADA: No Prahlad, you said repeatedly and emphatically that you support the Illuminati sites of Mukunda das (such as the one photographed above) which advertises people who are neo-nazis, anti-Zionists, anti-semites and so on. After we told you that your pal's sites are advertising anti-semites, animal hunters etc. and merging that odious agenda with images of Srila Prabupada, you STILL said we are bogus for attacking these sites, because you folks favor these neo-nazis, animal hunting etc. agendas, and you have even made these meat eater speakers into your "shiksha gurus" by selling their DVDs.

Worse, now you are advertising on your own site a person who is perhaps the worst blasphemous attacker of Srila Prabhupada and Krishna on the planet. You are promoting the people who are saying Krishna is a dictator tyrant, and His entire religion must be stopped. Why do you hate Krishna, and support His hate club leaders? Prahlad you are openly advertising for the worst haters of Srila Prabhupada and Krishna on your own site, which we have all seen since -- more than several people -- have eye-witnessed your supporting these offenders. Anyway the good news is, its official, you are in love with the haters of Krishna, we finally got to the bottom of your whole campaign. And Mukunda supports you because he is with that process himself.

Sorry Prahlad but its now fully documented that you ARE, in addition to promoting neo-nazi-ism, also advertising for the worst attackers of pure devotees and Krishna. We have witnesses, all of which is of course exposing your real mentality here. Several people are witnesses, and they asked us, why does Prahlad hate Srila Prabhupada by advertising for the leaders of his hater's club on his own site?

So you fully admited previously that you are a supporter of a web site that has anti-semite speakers USING THE IMAGE OF SRILA PRABHUPADA, and you have told us that repeatedly. Then a few days ago you said you are against such promotions. Now you are back to supporting Mukunda and his anti-semite speakers on his web site program. Worse, your program is SELLING THE DVDS of these meat eating and anti-semite speakers using Srila Prabhupada's photo to advertise these DVDs. See the photo above!

Can you quit making things up and just admit you are a supporter of the neo-nazi agenda of some of these Illuminati people -- which you advertised because you said you support that site? We don't care if you are a neo-nazi, we just want you to quit making up lies that you are not. You said you supported that program because you supported a web site that promotes anti-semite speakers, while using the image of Srila Prabhupada, you said it repeatedly and we have many eye-witnesses.

We also have seen a link on your site where you are advertising for the worst blasphemers of Srila Prabhupada and Krishna. So you are in love with the people who hate Srila Prabhupada, that is clear, because you are advertising the haters of Srila Prabhupada in public on your own site. We are glad all this is finally being exposed, you love the people who say horrible things about pure devotees and Krishna, you love the attackers of the Supreme Being. You are with them. And yes, we can prove it. If anyone wants to discuss the links ask us @ angel108b@yahoo.com. ys pd


Thanks Prabhu, Yes this is making no sense:

(B) Then all of a sudden (in the past few days) Prahlad says he has changed his mind completely, he has reversed course, suddenly he agrees PADA is correct! No one should be making this neo-nazi program public, because its making us look like fools. And anyone who supports the neo-nazis process is a demon, fool, crazy etc. And he is even publicly chastising people for not agreeing with PADA -- to avoid the neo-nazi agenda.

(C) Then just as suddenly, shortly after this dramatic reversal, Prahlad AGAIN reverses course! And he says he has changed his mind AGAIN! Now he is against PADA's rejecting the neo-nazi agenda, and he is instead still FOR the neo-nazis program. How did you guess, anyone who is not wearing jack boots and marching in lock step with Prahlad making zeig heil salutes is -- a demon, fool, crazy etc. Is someone not taking their medications?

Yes, this proves Prahlad has no actual position on anything at all, he totally reverses course several times in a few days. He does not even know where he is going -- and yet he wants others to follow him. OK, like the GBC gurus are doing. As one devotee pointed out, no one could follow these folks even if they wanted to, because these guys have no idea where they are going themselves!

He is simply arguing with himself, and chasing his own tail. The good news is that neither the KRISHNA WEST deviation nor Prahlad's NEO-NAZI deviant program is making much headway here in the BAY area, and probably not much elsewhere either. Its basically a few isolated cranks that support these deviations, you are correct. ys pd 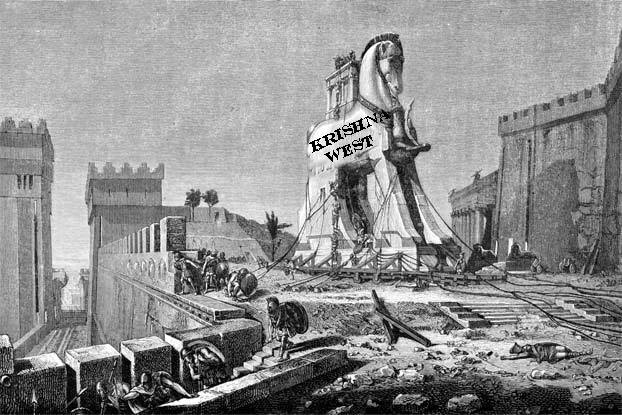