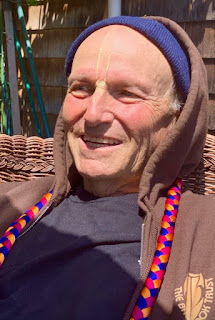 [PADA: Yes, Pusta Krishna used to give very energetic kirtana back in the day. He is another person who had to decamp from the GBC's program, like a lot of the rest of us have done. He has always treated others in a friendly and respectful manner and we wish him the best on his future road. We would like other details and / or confirmation of this report if anyone wants to volunteer. And we will post updates when and if we get them. ys pd]