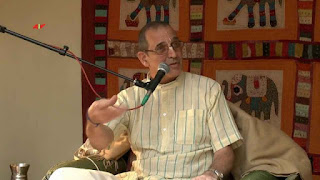 Pratyatosa Das: The polygamy video has been taken down! As you can see from the above 3 emails from YouTube, my wife, my daughter, and the groom, a mentally disturbed Hare Krishna devotee who has been diagnosed with cancer, Mayapurcanda Das, the son of Srutakirti Dasa, the famous former personal servant of Srila Prabhupada (who is on his 4th wife!), really, really don't want this video to be public on the Internet! They are really, really trying to hide what they've done in the Holy Dham! Why? Why polygamy, then a legal separation, and then a divorce? Was it a trick from the very beginning to make it look like they were doing something Vedic?

A divorce includes everything that a legal separation does plus more. So why get both? Why waste all of that time and money? Obviously, the plan was to only get a legal separation. (No divorce.) But the plans changed when Jayapataka ordered that his "disciple" and her new husband (my son-in-law) be legally married. This necessitated my daughter getting a legal divorce! So, my daughter and her "guru," Bir Krishna, went along with it, since they could now blame the extremely sinful divorce on Jayapataka!

[PADA: Correct. There were many (some say hundreds) of marriages broken up and / or orchestrated wife changing / etc. in New Vrndavana and Sulochan was one of the victims of this process. Apparently the GBC's leaders are still orchestrating their marriage interfering process. Its not been healthy for the society. As Sulochan said, the GBC's gurus attack the social structure of women, children and family units (marriages) so they can weaken the social structure, thus making women and children more vulnerable to exploiting, as has been going on.

As for so many people getting cancer or other fatal ailments, even a "karmi" writer asks me why so many so-called Krishna devotees seem to be having these chronic illness, well reported on various devotee web sites. I dunno, maybe its the stress of the mess being made by the GBC? Just saying!

Srutakirti seems to be the darling of the GBC's guru program. In any case, its amazing that the temples can become empty ghost towns, the society can be sued for mass molesting, the society has to be declared bankrupted, and all the while people like Sruta Kirti are hanging out with the leaders of that process and giving them high five salutes of "job well done."

Another devotee says people like Sruta Kirti hang out in ISKCON so he can exploit the society and get the pick of the ladies for his own various marriages. It seems altogether -- another sign that the GBC's folks have not learned much, they already got into trouble for their marriages manipulating programs in New Vrndavana, Jayatirtha had his head chopped off for manipulating the wives of his followers, and so on, and yet -- they continue on with this marriage manipulating process as if nothing is wrong? ys pd 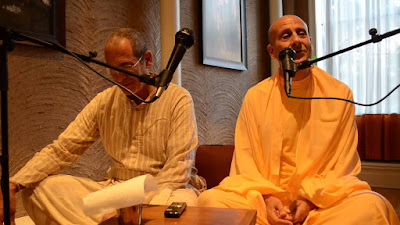 Sruta Kirti with his boss