Flat Earth vs Round Earth (Update) 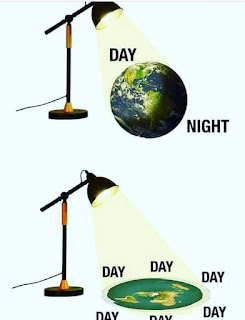 The problem of how the Sun creates the days and nights, seasons, etc. is equally applicable to both Maharaja's globe model or the flat island model.

[PADA: Not really. Sunanda says below that the Sun is millions of miles away from earth, which would make the earth basically sunshine everywhere at all times if it was a flat plane. Other "flat earth" folks have told me -- no -- the Sun is a not a big planet millions of miles away. Its a very SMALL planet, very close to the earth, so its like a flashlight moving around a round plate, producing day and night.

Sunanda has not indicated how his Sun, being millions of miles away, would produce day and night on a flat plane.]

According to the Bhagavatam and all the Puranas, the Sun moves along a path of revolution around Bhu-mandala that is many millions of miles away from where we are, traversing over the Manasottara mountain range.

[PADA: Correct, a light source that far away would make one uniform lighted up situation on an entirely flat area. The only way the light could be broken into day and night is if it was a globe. And then the globe would be rotating, thus blocking the Sun by its own body. just like we block the Sun and make a shadow with our own bodies.]

Yet, we are able to see the Sun at any given time in our reality as directly overhead.

[PADA: Nope, the Sun moves across the sky, its not always overhead.]

There is no local Sun according to the Bhagavatam to produce day and night, etc. on any so-called globe Earth, and no logical explanation according to shastra for such a conundrum and contradiction of the Sun's apparent movements to our vision which contradict the Puranic explanation.

[PADA: So the teeny Sun close to the flat plane earth idea is hereby dismissed as not valid.]

Neither Maharaja's globe model or the Puranic flat Earth model adequately answer this dilemma from a scientific or logical perspective, and it can only be explained as the mystical power of Surya Narayana.

[PADA: That does not make a working model of how the Sun, millions of miles away, makes day and night on a flat surface?]

On these grounds the so-called Vedic Earth globe concept alone does not satisfactorily prove the Earth isn't a flat plane just because a globe gets sunlight which produces day and night, etc. and a flat plane does not.

[PADA: There has to be a working model of how the Sun would produce day and night on a flat plane, especially if its going to be millions of miles away. That is the real dilemma here. Various devotees and / or the TVOP folks in Mayapura cannot agree on one standard idea, and therefore no working model has been produced to date.

Anyone who wants to prove the theory of the flat earth plane, or any other theory, has to make a working model to show how this movement is going on, and its becoming more and more evident, such a model -- which could be made with lamps, golf balls and plates or whatever, or better yet a digital movie-like rendition, is not being done? We have been asking to see the working model for maybe decades? ys pd]