PADA: Will will provide a link when its published 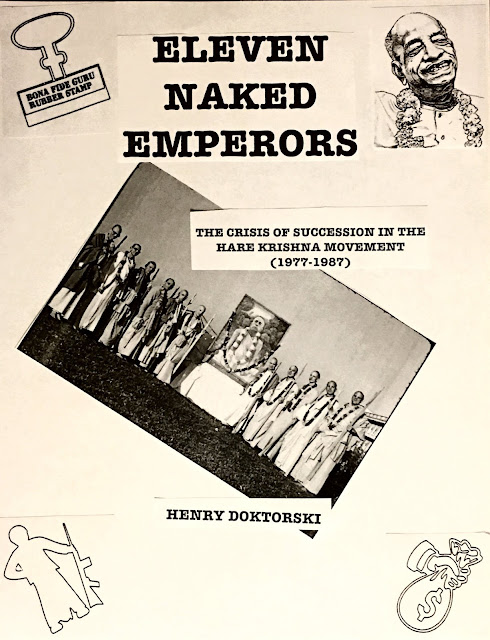 This book, "Eleven Naked Emperors," was written for my godbrothers and godsisters: members of ISKCON who lived through and remember those turbulent times in the late 1970s and 1980s when all hell broke loose after the Founder/ Acharya of the International Society For Krishna Consciousness passed away. Of course, many of us fondly remember the good times during those days: chanting Hare Krishna in the company of like-minded souls, dancing ecstatically during kirtans, worshiping the deities, eating sumptuous Krishna prasadam (when not fasting), visiting other ISKCON centers, going on pilgrimage to India, worshiping our own zonal-acharya spiritual master (allegedly Krishna’s confidential representative on earth), and watching Lord Chaitanya’s movement expand, in no small part due to our efforts and the efforts of many thousands of godbrothers and sisters throughout the world, all working together to save the world from illusion and bestow on suffering souls the blessed balm of Krishna consciousness.

For many, many years, that is how I perceived the world. Some called me a “bliss boy,” a devotee who simply likes to chant and dance and eat prasadam, work hard all day for the spiritual master, and associate with similarly-inclined godbrothers. I faithfully followed the four regulative principles, chanted sixteen rounds daily, ate only Krishna prasadam, avoided the “fringies” and others who were not strict in their sadhana, refused to indulge in gossip, or think or speak about anything but Krishna-katha: talks about Krishna or his service.

All else was maya—illusion—or so I was taught. When the nineteenth-century German philosopher, Karl Marx, declared, “It [religion] is the opium of the people,” he was speaking of me, and millions and billions of others like me. We had shut our minds and hearts to the real world and created (along with many other bewildered souls) a fictional fantasy world which existed only in our minds.

We saw the outside world through self-imposed rose-colored glasses. Everything looked rosy to us. “What me worry? Chant Hare Krishna and be happy!” But factually we had been deceived. All was not what we assumed. Behind the idyllic scene, an undercurrent of evil lurked and silently permeated the “holy” atmosphere.

The “self-realized spiritual masters” whom we worshiped as good as God were actually pretenders; stealing our intelligence, our minds, our bodies, and our lives, allegedly for the glory of God, but just as importantly: for the aggrandizement of their own imperfect and greedy selves. We had been taught that our gurus were on the highest platform of Krishna consciousness; in previous lifetimes they had been personal associates of Lord Chaitanya and maidservants of Radharani. We daily sang “Nikuñja-yūno rati-keli-siddhyai yā yālibhir yuktir apekṣaṇīyā,” from Srila Visvanath Chakravarti Thakur’s Sri-Sri Gurvastakam Prayers: “The spiritual master is very dear, because he is expert in assisting the gopis, who at different times make different tasteful arrangements for the perfection of Radha and Krishna’s conjugal loving affairs within the groves of Vrindaban.”

It is said, “Ignorance is bliss,” and we were certainly blissful (as well as ignorant), but was the ephemeral bliss we felt worth all the deception? I don’t think so, and I, for one, am glad that sad chapter of ISKCON history has ended (or so I have heard from ISKCON leaders). When my first book about the Hare Krishnas, "Killing For Krishna—The Danger of Deranged Devotion" (2018)—was published, I received many, many letters of laud from current and former ISKCON godbrothers and sisters thanking me for documenting an important chapter in ISKCON history which had been hidden from most of the world for thirty years.

Yet I also received queries from others who doubted and challenged my qualifications (and motives) to write a book on the history of ISKCON. One devotee woman went so far as to write a negative 3,000-word online review of "Killing For Krishna" in which she boasted, “I have not read the book, and have zero plans to do so.” As far as I am concerned, anyone has the right to write a book about anything they want, and I am doing it, whether others like it or not. Researching and writing is my dharma, for I am, by nature, both a reporter and a historian.

Reporters dig into the story in an attempt to discover the truth, and then they report it. Historians research and write about the past. That is what they do. I heard that once Prabhupada said that a dancer dances whether she find herself in heaven or hell. The dancer’s dharma is to dance. Similarly, my dharma is to research and write, and I will do that whether I’m in heaven or hell, or whether people praise me or condemn me. It makes no difference to me. Regarding my qualifications to write about the Hare Krishna movement: I faithfully served ISKCON and my spiritual master for fifteen years during a very formative time in my life. Since then, my life has been influenced to a great degree by those fifteen years as a Hare Krishna devotee.

I still feel the effects today, both positive and negative. Why can I not write about things which affected me greatly? Those who speak ill of me or my book without even bothering to read it, in my opinion, are just envious. “Why don’t you write your own book?” I ask them. “Who is stopping you?” Others challenge my motivations: “You’re just looking for fame, adoration and distinction.” “You’re in it for the money.” “Do you follow the regulative principles?” “You must want to hurt Prabhupada’s movement.” “Do you believe Srila Prabhupada is a perfect paramahamsa saktya-vesa avatar and the Jagad-Guru, the Savior of the World?” I see no need to defend myself or reply to such inquiries.

A historian researches the past and writes about it. In my opinion, historians are very important. How can one understand the present if one does not understand the past? Regarding my detractors, some of them may have legitimate complaints, and I am grateful to them and I thank them for revealing the errors in my writing. I have never said that I (or my work) am perfect and infallible. However, some others appear to be simply looking to denigrate my work for unknown reasons, perhaps because they want to protect the status quo in ISKCON. Regarding them, I reply: one can never satisfy a fault-finder.

Despite the opposition, I carry on. The dogs will bark, but the caravan passes them by and moves forward, and the dogs remain stuck in their tiny backyard, restrained by a collar and chain of envy, only to bark at the next passerby. “Row, row row!” (This is the sound Prabhupada made when he imitated the barking of a dog.) My books, "Killing For Krishna" and "Eleven Naked Emperors," were written for thoughtful readers who may be curious to discover an alternative viewpoint about what happened in the Hare Krishna movement after the passing of its founder. I think those readers will learn something and benefit, as I have learned and benefited from my research. Om Tat Sat.

[PADA: Pretty much same things happened to me. As soon as I said there is problem with: The 11 GBC guru princes; The subsequent book changes; Molesting of children issue; Purges of devotees issue; Apparent embezzling issue; Assorted and sundry crimes including murders; Poison of the founder issue etc. then many people said "Oh you are trying to ruin ISKCON for pointing these things out!"

Glad PADA could help out with these type books by having a web site where a lot of this history is ALREADY stated. Of course we need at least some people to collate and organize all this info into a book, good idea!

In fact even some alleged ritviks like Sanat / Mukunda/ Prahlad / HKC Jaipur and their clones and / Janardana / Krishna Kirtan / Pancali etc. all started crying like stuck pigs when the bogus messiah's program was being addressed by us. And they even said PADA needs to be kicked off the internet, so they can save the poisoners of guru regime from being exposed by us dissenters. Of course this is why Sulochana summed up and called these people "the boot lickers of the bu*tt buggers."

Then again, we get the same other complaint, "Oh this person is motivated for position" and so on. As one ex-kuli said, this is how these folks suppressed the complaints about the child abuse the whole time. Anyone who complains is "motivated." That means the abuse will never end -- if everyone who says the emperor has no clothes is "motivated" -- he will be naked forever.

Or is that the plan? Yes, your house is on fire! Really? Who cares! You are just motivated to get a post for yourself. OK we actually don't care if our house is on fire. Fine, but then they claim to wonder why so many people died in the fire?

Anyway, this is good. These issues need to be exposed, and its correct to say, history has to be understood because -- "those who fail to heed history, are condemned to relive it." ys pd]