[PADA: Our God brother Pusta Krishna das has departed. We wish him well on his future travels. Honest!

A devotee requested me to write a brief explanation of the Soquel Gaudiya Matha temple that Pusta Krishna attended and promoted. And of course we are always hopeful that people on their last "death rattle end of life" will finally speak the truth; that deviants are not, were not, could not have been -- Krishna's acharyas. And we have been wrong to help the Gaudiya Matha sponsors of these apa-siddhanta ideas -- that acharyas are often debauchees, but that seems to almost never happen.

The Soquel temple was originally a property owned by Gopal Vrnda pal and Mula Prakrti dasi, and they made some arrangement for the Sridhara Maharaja Gaudiya Matha's folks to acquire it. And later on, Mula Prakriti became a big leader of the Narayan Maharaja program. Of course NM was a huge hand maiden / cheer leader / supporter of Tamal and the GBC's illicit sex with men, women and children acharya's process. And that is why we had to break away from these folks. We simply do not accept that God's messiahs / gurus / acharyas / parampara successors etc. are often illicit sex predators, drunkards, molesters of minors, deviants and criminals etc.

That was never taught by Srila Prabhupada.

Originally Sudheer Krishna was Sridhara Maharaja's appointed guru and head of the Bay Area mission, but he allegedly fell down into some sort of scandal and was replaced with various people until they later made Janardan Maharaja the leader. Janardan Maharaja is another ex-ISKCON and is now the appointed successor of Govinda Maharaja “His Divine Grace Om Vishnupad Srila Bhakti Pavan Janardan Maharaj."

[... Srila Janardan Maharaj continued to travel and preach on behalf of Srila Govinda Maharaj and his relationship with him developed more and more and became deeper and deeper as the years went by. Srila Janardan Maharaj would visit India regularly and personally collected donations on behalf of the central Math. He would also participate in the Sri Chaitanya Saraswat Math Nabadwip Dham Parikrama in a glorious way bringing so much inspiration to the devotees and much joy to Srila Govinda Maharaj’s heart.

Anyone who is familiar with PADA knows that we disagree with Sridhara Maharaja's teachings -- that acharya are often deviants who are "going mad after money, women and followers." That would make my trash collecting man more advanced than Sridhara Maharaja's acharyas, because our trash man is a pious person who goes to church and he has no interest in "going mad after money, women and followers."

In others words, Sridhara Maharaja is not advanced enough to promote my trash man as his sum total of the demigods messiah guru. We also disagree with giving acharya titles to neophytes, and claiming that neophytes can be diksha gurus who will absorb sins like Jesus etc. In any case, we think that Pusta Krishna and others ran off to the supporters of the GBC's gurus because they never clearly understood the principles of what are the factual qualifications of an acharya. The acharya -- goes mad after money, women and followers? All because these people have not ever understood what is an acharya, its that simple.

When I said Jayatirtha is not an acharya -- because of his illicit sex and drugs problem, Sridhara Maharaja said we "dissenters" should remain silent because "none should protest." Did If forget to mention that Jayatirtha's head was chopped off later on because of keeping him in the acharya's post under the emphatic pressure of people like Sridhara Maharaja?

Amazing! Even after their illicit sex and drugs acharya's head is chopped off, they still think this is the way forward. Heh heh heh.] 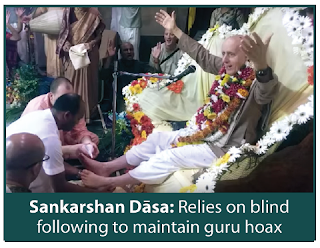 Sridhara Maharaja opened the flood gates for all sorts of fools to become acharya.