How Krishna Destroyed the Yadu Dynasty 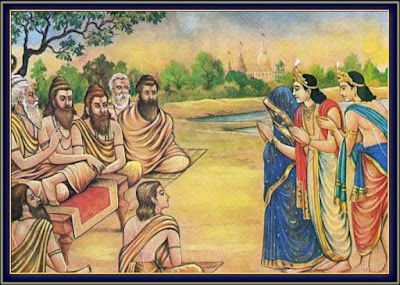 Samba: Making pretend to be a pregnant woman,
which infuriated the sages.

Śrīla Bhaktisiddhānta Sarasvatī Ṭhākura, however, has revealed that although many demigods had taken birth in the Yadu dynasty to assist the Lord, some members of the Yadu dynasty were actually inimical towards Kṛṣṇa. Because of their mundane vision of the Lord, they considered themselves to be on the same level as Kṛṣṇa.

Having taken their birth in the family of the Supreme Personality of Godhead Himself, they had inconceivable strength, and thus they misunderstood Kṛṣṇa’s supreme position. Having forgotten that Kṛṣṇa is the Supreme Personality of Godhead, they would constitute a great burden, and consequently it was necessary for Kṛṣṇa to remove them from the earth. There is a popular saying that familiarity breeds contempt.

To destroy the contemptuous members of His own dynasty, the Lord caused a quarrel among them. For this purpose, He arranged for Nārada and other sages to display anger against the Kārṣṇas, the members of His family. Although many Yadus who were devoted to Kṛṣṇa were apparently killed in this fratricidal war, Lord Kṛṣṇa actually returned them to their original positions as universal directors, or demigods.

It is the Lord’s promise in Bhagavad-gītā that He will always protect those who are favorable to His service.

SB 11.30.12 — Then, their intelligence covered by Providence, they liberally indulged in drinking the sweet maireya beverage, which can completely intoxicate the mind.

SB 11.30.13 — The heroes of the Yadu dynasty became intoxicated from their extravagant drinking and began to feel arrogant. When they were thus bewildered by the personal potency of Lord Kṛṣṇa, a terrible quarrel arose among them.

SB 11.30.14 — Infuriated, they seized their bows and arrows, swords, bhallas, clubs, lances and spears and attacked one another on the shore of the ocean.

SB 11.30.15 — Riding on elephants and chariots with flags flying, and also on donkeys, camels, bulls, buffalos, mules and even human beings, the extremely enraged warriors came together and violently attacked one another with arrows, just as elephants in the forest attack one another with their tusks.

SB 11.30.17 — Others also, such as Niśaṭha, Ulmuka, Sahasrajit, Śatajit and Bhānu, confronted and killed one another, being blinded by intoxication and thus completely bewildered by Lord Mukunda Himself.

SB 11.30.19 — Thus bewildered, sons fought with fathers, brothers with brothers, nephews with paternal and maternal uncles, and grandsons with grandfathers. Friends fought with friends, and well-wishers with well-wishers. In this way intimate friends and relatives all killed one another.

SB 11.30.20 — When all their bows had been broken and their arrows and other missiles spent, they seized the tall stalks of cane with their bare hands.

SB 11.30.21 — As soon as they took these cane stalks in their fists, the stalks changed into iron rods as hard as thunderbolts. With these weapons the warriors began attacking one another again and again, and when Lord Kṛṣṇa tried to stop them they attacked Him as well.

SB 11.30.22 — In their confused state, O King, they also mistook Lord Balarāma for an enemy. Weapons in hand, they ran toward Him with the intention of killing Him.

SB 11.30.23 — O son of the Kurus, Kṛṣṇa and Balarāma then became very angry. Picking up cane stalks, They moved about within the battle and began to kill with these clubs.

SB 11.30.24 — The violent anger of these warriors, who were overcome by the brāhmaṇas’ curse and bewildered by Lord Kṛṣṇa’s illusory potency, now led them to their annihilation, just as a fire that starts in a bamboo grove destroys the entire forest.

SB 11.30.25 — When all the members of His own dynasty were thus destroyed, Lord Kṛṣṇa thought to Himself that at last the burden of the earth had been removed.