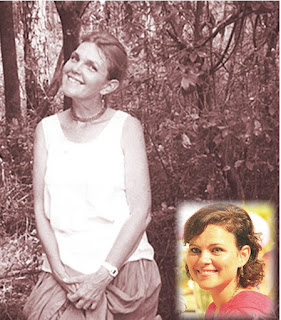 
Karnamrita Dasi (her daughter, shown in the little square photo with her mother):

She left at 9:40am, she had said the evening before, just as we were ready to go to sleep, "The train is coming, I'm getting on" I thought there were no meanings to her words. And then the next morning my sweet friend Molly Ananga Manjari Martin who was helping with my mother's needs, let me know that her loud death rattle had stopped and to come immediately. I'll never forget how that death rattle sounded ... it's not something you want to hear your loved ones struggle through.

And there she was, I had only left briefly, but everything had slowed down, her breath, her sound, and her lips were spreading now into a smile. That moment of transition is a very big blessing to witness. It's not easy, but it's transformational to those conscious to realize the moment; there is a deep release of this body and into another spirit realm. My mothers only wish was to return to her Guru's side and service.

She said very openly, "I don't know Krsna, I don't know Radha, I've never seen them or heard them ..... but I know Srila Prabhupada. I saw him, I heard him, I watched his life and examples. I want to go start this movement again, in the next Lila, by his side only." I cried at her dedication. May I have it one day.... they called my mother the "foot soldier"... she was the one who came earliest and stayed the latest.

She was beautiful, loyal, and a dedicated bhakti yoga practitioner. I still miss her influence on my devotion, and her HUGS!!!!

On this blessed day, all those years ago, it was also the day of New York's Ratha-Yatra (Festival of the Chariots). I have always wished I could put her photo on the cart, and offer my singing there ...she dedicated her whole life to this community. But she never needed to be recognized, it's MY desire to see more of her sisters recognized in this society of ISKCON, it is not theirs.

These original pioneer women of the Krsna society are nothing short of the finest examples of patience, humility and dedication. My mother admired when things were made by hand, the gardens, the milk sweets, the sweaters she knitted every year. When she was dying, it was of bone cancer, not an easy one to deal with as far as pain.

She used to want to get outside in the garden, so we took her bed that had wheels, and wheeled her out through the vegetable rows of the community garden. She knew every herb, vegetable, plant and flower. When we were in that garden, she used to call her bed 'my wheelbarrow'. So when she passed away, we took her out on that wheelbarrow, and we decorated it with all the lettuce and flowers and vegetables that were growing in the garden.

It was how she liked to be close to the earth and with Krsna's beauty. She would have liked to live in the garden... heaven knows when I was born, till I was 4 years old, we lived in the barn with the cows!

I think it's important to remember the foot soldiers. They are the ones with gold colored spirits, and along with my mother and her sisters, there are many I would love to honor Sumati Dasi Barbara Veda Wolff Nirmala Devi Gopalasyapriya Dian Alpert White Bhaja Govinda Harinama Chintamani Compassionate Rose.

To all those who served with my mother, Thank you! She had an exceptional life and was LOVED by so many. Her memorial service went on for days because everyone's dedication to her, (even her doctor from the local hospital) was filled with emotions and true impact. The saints walk amongst us, without need of recognition...
Posted by krishna1008 at 5:57 AM