We are all servants, by Haripada dasa 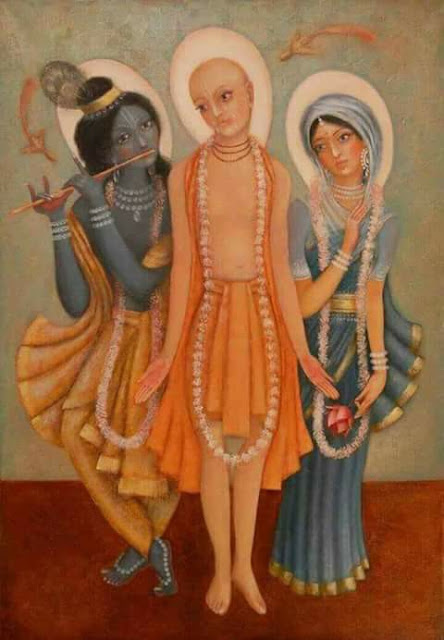 We are all servants, by Haripada dasa


The essence of the philosophy of Krishna consciousness is in a verse from Sri Chaitanya Charitamrita that says that only God or Krishna is the master and all others are his servants, in relation to this it is very interesting what Srila Prabhupada says in the Gita, 6, 29, there says that while the living entity is in the bosom of the material energy, it serves the material senses; and while in the bosom of spiritual energy, it serves the Supreme Lord directly.

In either case, the living entity is the servant of God. This vision of equality is perfect in a person who is in Kṛṣṇa consciousness. We are an energy of God or Krishna that is called marginal, marginal means we have two tendencies, the original, pure and eternal tendency is that we are happy serving God or Krishna and His devotees, and the other tendency is that we misuse our free agency and we think we will be happy living independently of God or Krishna and His devotees, this point is very well explained by Srila Prabhupada in the meaning of the Hare Krishna Maha-mantra, there he says that this atmosphere, in which we now live, is called maya, or illusion.

Maya means "what is not". And, what is that illusion? The illusion is that we try to be the lords of material nature, when the reality is that we are subject by the shackles of their strict laws. When a servant tries to artificially imitate his almighty master, that is called illusion.

Contaminated by this concept of life, we all try to exploit the resources of material nature, but the reality is that we get entangled more and more in its complexities. Therefore, despite our hard struggle to conquer nature, we depend more on it. This illusory struggle against material nature can be stopped immediately if we revive our Krishna consciousness. The cultivation of Krishna consciousness is not an artificial imposition that is done to the mind; This consciousness is the original energy of the living entity, who revives when we hear the transcendental vibration.

And this is the process recommended by the authorities for this era. Direct experience also allows us to perceive that the chanting of this maha-mantra, this Great Chant for Liberation, can make us feel an immediate transcendental ecstasy that comes from the spiritual plane. And when in fact we are in the plane of spiritual understanding, having overcome the levels of the senses, mind and intelligence, we situate ourselves on the transcendental plane.

Here the point is to get rid of the false ego, I share that in Śrīmad-Bhāgavatam, Chapter Twenty-two, verse 39, where Sanat-kumāra says:

"My dear King, the false ego of the human being is so strong that it keeps him in material existence as if he were bound by a very strong rope, only the devotees can cut the knot of that rope very easily, by engaging in the process of Kṛṣṇa consciousness Others, who are not in Kṛṣṇa consciousness consciousness but try to become great mystics or great practitioners of ritual ceremonies, can not advance like devotees. the activities of the Kṛṣṇa consciousness process, to get rid of the tight knot of false ego and the execution of material activities. "


A conversation with His Divine Grace A.C. Bhaktivedanta Swami Prabhupada:
Reporter 3: Your Divine Grace, you’re saying we can see the Lord only by consulting the scriptures and the succession of bonafide spiritual masters. But supposedly, Lord Krishna is eternal, or indestructible. So surely He must be existing today. Which means we should be able to see Him now.

Srila Prabhupada: Yes, Krishna is existing. For instance, the sun is existing, but at night you have no eyes to see the sun. That does not mean the sun does not exist. It is your deficiency—at night you cannot see the sun.
Whatever it may be. The thing is, although the sun is always existing, you require qualification to see the sun at night. Similarly, although Krishna always exists, you must be qualified to see Him in the night of this material world.
That qualification is described in the Brahma-samhita: premanjana-cchurita-bhakti-vilocanena santah sadaiva hridayeshu vilokayanti. Those who are saintly persons and in ecstatic love with Krishna—they are seeing Him twenty-four hours a day. That is not very difficult to understand. If you love somebody, you are seeing him or her always. Is it not?
Reporter 3: That’s so.
Srila Prabhupada: So seeing Krishna requires the qualification of love. Then Krishna will be visible twenty- four hours a day. He’ll talk with you. These things are described. Tesham satata-yuktanam bhajatam priti-purvakam dadami buddhi-yogam tam: “To those who are constantly devoted to serving Me with love, I give intelligence.” That means He talks. “I give intelligence.” Unless He talks, how can He give intelligence—“You do this”? So you have to qualify yourself to see and hear Krishna. But Krishna is always present.