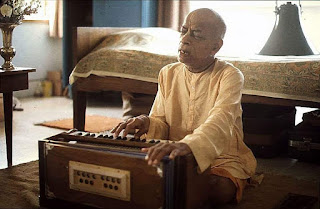 Pusta Krishna das: It is done! I have retired from the practice of orthopedic surgery formally. One who has never had the responsibility for caring for the health of others, often in very serious even life-threatening circumstances, may not be able to appreciate what it is like to have that weight lifted from one's shoulders. Now I am proposing to become ever more deeply engaged in my spiritual practices. Human life is meant for awakening love of God, and going Home at least to the spiritual world where every word is a song and every step is a dance ... forever. Paul Dossick (Pusta Krishna das).

[PADA: This is good news, devotees should be able to retire and spend their later years in spiritual practices. Srila Prabhupada wanted that.

My personal program had been trying to establish "what guru system did Srila Prabhupada want?," and then for me to retire when the actual system he wanted was operational among some folks, even if not a large number, but at least I wanted to have a foundation for that worship to continue.

And by Krishna's grace we are getting more and more people on board with the idea that Srila Prabhupada should continue to be the ongoing guru of ISKCON, and not a pile of voted in conditioned souls. I hope more of these retiring devotees step up and help along those of us who are promoting this idea.

I recently heard some nice words from another God brother, who wrote a nice book about Srila Prabhupada, and the book is wonderfully expressing how Srila Prabhupada is a divine being etc., but there is no explanation for why most of his disciples went on to worship deviants and debauchees in the Vyasa seat after he departed? We need to clarify all these matters for historical reasons.