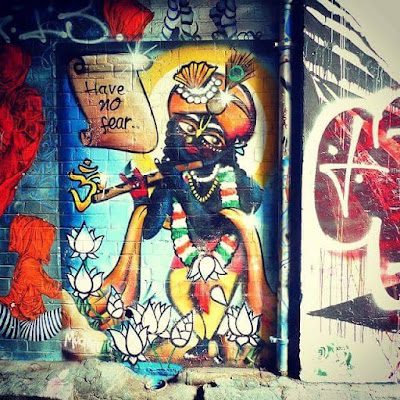 I'm watching a very good television show with my wife and son – it’s called "The Walking Dead." It’s set in a zombie apocalypse scenario and shows how human beings try to survive. It’s much more about human psychology than about zombies.

One of the most disturbing and terrifying things the show reveals is that humans wind up being much more dangerous to one another than the zombies. You would think that the survivors would think, “we are all humans, we have a common enemy and a common goal, let’s unite and fight together.”

But what actually happens is that a lot of people think “I need to survive. My needs, and the needs of those related to me, come first – before everyone else.” In The Walking Dead, humans rarely ever unite or cooperate with one another – they mostly fight and try to conquer one another’s dwindling resources.

The realism of this depiction is disturbing.

It is, to me, vividly analogue to the way Gaudiya’s recently split themselves into minute factions and war amongst one another.

“We are Gaudiya Maṭh, you are not. We hate you.”

“We are are the babajis. We represent the real tradition. You don’t, so we hate you or pity you at best. Anyway, you are certainly not one of us.”

“We live in a temple, and you don’t – so you are a blooped fringie and we are the real deal.”

“We are the ritviks. You are the Prabhupada-usurpers. We will focus all our attention on defaming you, and none on faming Krishna.”

“We are the book distributors, you are the gopi-bhava club. We never want to be as useless as you. Prabhupada hates you.”

“We are manjari’s, we are pure. You are impure, you just want to enjoy Krishna in the guise of Sakhi-anugata. Therefore we don’t want to be touched by your shadow.”

So much and ever-more-minute fractioning of what is essentially a single family of Sri Caitanya Mahaprabhu’s followers! We all have such similar goals and hopes, and we all face such similar obstacles and pitfalls. The way we are unable to band together in unity just seems so exactly similar to the way humans tear each other apart in The Walking Dead.

So much “diti” – division. Diti is the mother of the Daityas, demons – selfish beings absorbed in the consequent anger and hatred. Aditi (unity) on the other hand, is the mother of the divine forces, Adityas – self-sacrificing beings who help the world, and therefore experience peace of mind and come closer to understanding love.

Division is not an inviting path to tread, but it seems that the Gaudiyas are swimming in it. We need to focus more on hearing Bhagavatam and chanting Hare Krishna, and less on our cross-examination. This bhajan-kriya will effect anartha-nivṛtti, which will cure this ugly situation.

[PADA: The post 1936 Gaudiya Matha also splintered into many self-appointed gurus and groups, and thereby became ineffective in their preaching. So this is right, divisions among the Vaishnavas is causing the whole Gaudiya movement to be less effective, if not -- to look just a little foolish in the public and media.

At the same time, many factual dubious gurus and factual crimes have been going on and "not criticizing" has lead to many of these crimes and criminals over taking the society, which is another bad publicity issue. So we are sort of between a rock and a hard place on all this: allowing deviations makes us look foolish, attacking deviations makes us appear as battling warriors, there is no good path forward.

At the same time when devotees are sitting around watching "The Walking Dead," or watching football like Satsvarupa says he is doing, and the "devotees" are not doing more devotional activities instead, that itself shows the deteriorated state of the devotional community.

Anyway, Srila Prabhupada says that people who are artificially posing as avatars and acharyas need to be challenged, and / or alternate preaching needs to be done. Watching TV is not going to be effective in doing either. There needs to be a better plan to rectify the problems of ISKCON. At least the ritviks are making some programs, temples and devotees, and they are printing at least some books, that is a lot better than doing nothing. We need to see practical alternates going forward, that's the bottom line. ys pd]