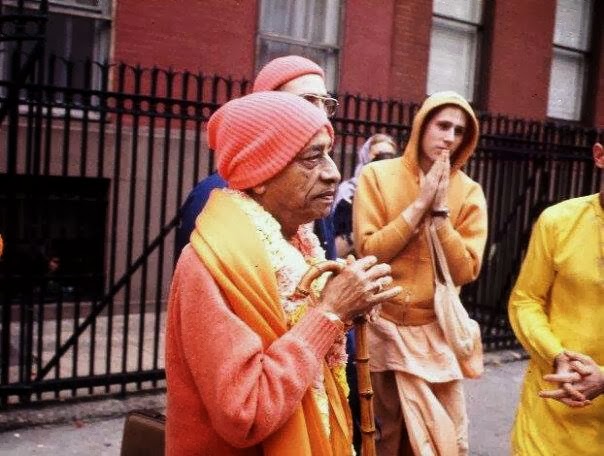 [Position Paper to Establish the Acharya of ISKCON?]


Supposedly, the GBC meetings in Mayapur have been going on for 6 days now, but there seems to be a complete news blackout. Weird.

[UPDATE: Ravindra Svarupa, his wife and disciple Sraddha devi were thrown out of the Philadelphia Temple on Februrary 8th. They left on completely bad terms and burned all bridges and are not really even welcome to even visit again. The final insult was RSD's last chance grab out the door, having Sraddha devi post a link on facebook begging everyone to monetarily assist in their move out of the Temple and sponsor a "retirement" fund in his honor. All three skipped town and moved to Maryland, he is rumored to be extremely worried about possible legal issues. Once they all moved to Maryland, Sraddha and Ravindra packed up and headed to Mayapura and Ravindra's wife alledgedly stayed behind to unpack I guess. Ravindra and Sraddha have been seen hanging out everywhere together on the periphery of the Mayapura festival to the absolute disgust and disbelief of everyone. Even for the hardcore hyprocrites of ISKCON leadership this has been too much to handle. The final insult to the victims and ... ]

PADA: Yes, the only news we heard so far is that the GBC has re-coronated Ravindra Swarupa as "the most intelligent writer in ISKCON," and they handed out copies of his paper "Srila Prabhupada." Normally we hear reports: (A) Day one, Strategic World Management Committee (SWMC) for burying dead homosexual pedophiles in the holy dham commenced meeting. (B) Day two, SWMC committee to declare acharyas as debauchees, drug addicts and whore mongers commences meeting. Beedi smoking is optional. (C) Day three, SWMC declares Shasta Advisor Committee (SAC) for SWMC as bogus since they want to make women as gurus -- who might object to the policy of burying dead pedophiles in the holy dham. Watching football on your cell phone optional. (D) Day four, SWMC declares feet washing ceremony for their lawyers who are suing  the Prabhupadanugas. Counting your Swiss Bank accounts assets day optional.

This year, ooops, nothing to report?

The problem is that most of the people in Philadelphia cannot stand Ravindra Swarupa, they do not want to hear one word he has to say, and they want to have him banished from the temple for his numerous abuses and deviations. He is in the process of being booted out of the Philadelphia temple AS WE SPEAK for all these abuses and deviations. In sum, he has no credibility. This is the only rabbit the GBC has to pull out of their hat, lets revive Ravindra as our hero writer?

The paper he wrote goes into extensive detail how we should not become like the Gaudiya Matha, except that Ravindra Swarupa's program has all along promoted folks like: Sridhara Maharaja; Gopi-bhava club wanna-be leader Narayana Maharaja; BV and BP Puri; Fakir Mohan; various Radha Kunda babajis and many similar others. Some of these Gaudiya Matha people (ok and Naryana Maharaja) were the people who objected to Srila Prabhupada using the title of "Prabhupada."

Meanwhile people seem to forget that Ravindra had been the main person writing "position papers" defending the worship of Kirtanananda as the acharya of ISKCON, basically saying that Srila Prabhupada cannot be the current acharya -- since we NOW have Ravindra's homosexual and criminal deviants to take his place. Apparently, no one remembers those writings? No one also seems to recall that Ravindra has been the biggest cheer leader of Satsvarupa and his whack-doodle art and writings.

In 1986 Ravindra said that me and Sulochana are offenders to a great  pure devotee like Kirtananada, which lead to the death of Sulochana. Ravindra said we were wrong to oppose the molester messiahs program, and so thousands of children were victimized, and so on and so forth. This is their plan to save the world, lets revive Ravindra as our main hero? The same guy who drove ISKCON off the cliff into the worship of homosexual pedophiles as messiahs, is now the main speaker for this group? Well that's good news for us, that means they cannot find another spokesman, nobody wants to come forward to defend this mob.

Last week at Sridama Mayapur, during the ISKCON Leadership Sanga of over 1000 ISKCON leaders from around the world, the GBC Foundational Document titled "Srila Prabhupada - Founder-Acarya of ISKCON" was released. It is being distributed as a free book and also in PDF.
===========================
Posted by krishna1008 at 7:56 AM