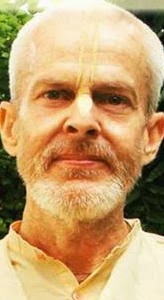 At its recent meetings in Mumbai, India, the Governing Body Commission (GBC) of ISKCON passed a resolution regarding Mahanidhi Swami. That resolution is found below followed by a brief excerpt of the GBC Executive Committee’s letter to Mahanidhi Swami’s disciples and followers.

It is Resolved that:

Mahanidhi Swami has stated that he has resigned from ISKCON, therefore he is suspended as initiating guru and sannyasi within ISKCON. We would like Mahanidhi Swami to return to ISKCON. Should he choose to do so, he should approach the GBC Executive Committee, and assisted by the Sannyasa Ministry, agree upon a complete program for his rectification and reinstatement.

[PADA: Yep, when it turns out Jesus is really acting Satanic, we need to "rectify" the wayward Jesus. No, you GBC should not have promoted a conditioned soul as one of your gurus in the first place. There is no such thing as "rectification of the acharyas," you are making this up. We neophytes need rectification, not the acharyas!]

The letter to Mahanidhi Swami’s followers contains the following:

We want to offer our appreciation for your courage and humility in approaching the GBC Executive Committee with your concerns regarding Mahanidhi Swami’s problematic behavior.

[PADA: Great, they acharyas have "problematic behavior." What! That is why the Sri Isopanisad says these false acharyas are destined for the most obnoxious regions, they are insulting the REAL acharyas be saying that acharyas are often deviants, miscreants, debauchees, criminals and so on.]

We know that it was difficult and painful for you to come forward. We also know that you did so only after multiple, genuine efforts to assist your diksha guru by speaking with him directly.

[PADA: Difficult and painful? We are getting banned, beat and killed for coming forward, and guess who is causing that pain? You, the GBC leaders are causing this pain to others by your orchestrating this dangerous fanaticism of worship of conditioned souls.]

We respect the sincerity of your efforts to help him, and we respect that you approached the GBC in a sincere mood of doing what was best for both Mahanidhi Swami and ISKCONi

We encourage you–especially at this time–to take shelter of Srila Prabhupada and his instructions, as he is the preeminent siksha guru for all ISKCON devotees.

[PADA: Oh goody, when your guru is a fool, then take shelter of Srila Prabhupada temporarily, until we re-initiate you under another fool.]

We also encourage you to take shelter of other senior devotees in ISKCON. As long as you continue to take guidance of Srila Prabhupada and his sincere followers and remain strict in your spiritual practices, you will be safe and secure under Lord Krishna’s protection.

The GBC Executive Committee also wishes to request the devotees of ISKCON to offer their prayers for Mahanidhi Swami. We also request all ISKCON devotees to extend their full support, friendship and understanding to the disciples and followers of Mahanidhi Swami, who themselves are remaining as faithful followers of Srila Prabhupada and his ISKCON society.

[PADA: Yep, saying that acharyas are performing abominable actions is "faithful to Prabhupada." Nope, its not! That is not what he says, he says -- false acharyas go to the most abominable regions, and so do their cheer leading supporters ok like Tamohara, Anuttama etc. ys pd] 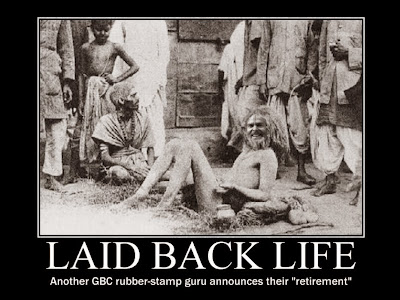