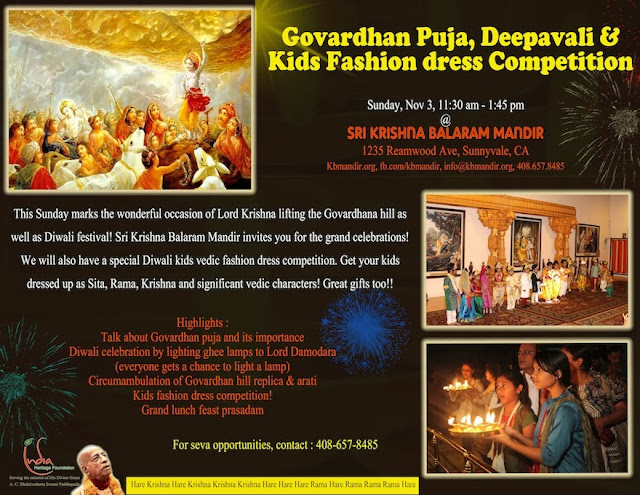 Diwali ceremony can be observed in the temple by illuminating 100's of candles, indifferent parts of the temple, and offering a special Prasad to the Deity. This ceremony was observed by the inhabitants of Ayodhya, the Kingdom of Lord Ramachandra, while Lord Ramachandra was out of His Kingdom due to His 14 years banishment by the order of His father. His younger step-brother Bharat, took charge f the Kingdom and the day on which Lord Ramachandra took back the charge again from His brother, and seated on the throne, this is observed as Diwali, and Deepabali. Deepabali means the same thing – Deepa means candles, and bali means numerous. When numerous candles are lighted it is called Deepabali. In India, this Deepavali function is celebrated in a special auspicious occassion. This Deepabali function can be observed on 21st October, and Prasad can be distributed on 22nd October, during daytime, which is known as Govardhan Puja and Annakuta Ceremony. In India, in all Vaishnava temples, this ceremony is observed and 100's of people are given prasadam according to the capacity of the temple. So I understand that last year the Deepabali ceremony was held in the temple, and there was collection of $130.00. So you can do the needful.

Hope you are all well.
Your Ever Well Wisher.
A.C.Bhaktivedanta Swami.
Posted by krishna1008 at 7:14 PM