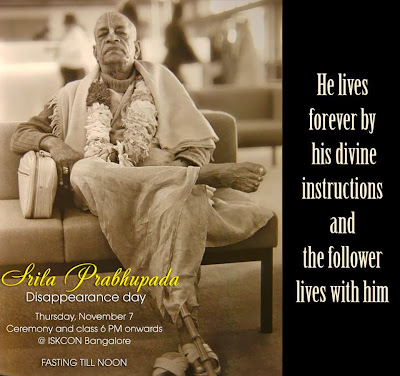 1. On that day, in pain of separation., oh Lord, I was grief stricken, Unable to tolerate being apart from my spiritual master.
2. On today's auspicious occasion, to offer you worship, I have come With this offering, remembering your lotus feet.
3. Mahāprabhu's principal conclusion is that renunciation is prime; Not only that, but it is to be distributed to everyone.
4. The neophytes have no ability to make any solution, But you are a mahā-bhāgavata and you have given us direction.
5. Bewildered by ignorance, what kind of renouncers can they be? They are simply false renouncers, giving up externally.
6. Real renunciation comes from transcendental feelings. Without such feelings, a renouncer is known simply as 'show-bottle'.
7. But there is another show-bottle, with preaching as its purpose: The Lord's sannyāsa, which is the defeat of the impersonalists.
8. Lord Caitanya's teachings are beyond varṇāśrama-dharma. They are Bhāgavata-dharma and destroy all cheating processes of religion.
9. Performing dry renunciation, preaching will not be successful; 'Yukta-vairagya' is the essence of all Caitanya philosophy.
10. "The sannyāsa I have given you" is for preaching in devotion. The atheistic sense enjoyers are bewildered in understanding.

11. The sannyāsīs go and stay in the mountain caves, But you, master, keep your sannyāsīs in marble mansions.
12. To see a sense enjoyer's face is just like drinking poison, But you, master, are giving your darśana here and far away in foreign lands.
13. Mlecchas and yavanas are not allowed to enter Hindu temples, But you, master, make them the chairman and sit them in the assembly.
14. To cross the ocean is not allowed for Hindus, But you send your devotees across the ocean.
15. In Kali-yuga's cities the guru's instructions are "forbidden". But you remain there anyway with your special purpose in mind.
16. The devotees want to go to some lonely place to perform their bhajan alone, But you don't accept this in your judgement.
17. Where there is an increase in the measurement of people, There your preaching work is to be seen.
18. You want to make a student hostel in London, and You explain it must be nicely arranged.
19. In the land of barbarians, a student hostel for preaching 'Hari Katha'! Who can understand all these things?
20. To mitigate all these contradictory ideas is not the trifling act of an inexpert and inexperienced person.
Third Vaisistya
21. If everyone sat down together and carefully considered, Then what nice preaching there could be.
22. After all, that is Prabhupada's command—for all to join together to do this preaching work, merged in your instructions.
23. If you simply imitate, there will be the opposite result, for as long as you try like that, there will be failure.
24. Now all of you are returning here on his order to worship him on his Vyāsa-pūjā day all together you are engaged in His worship.
25. But a festival of flowers and fruits is not the real worship: One who serves the guru's message really worships him.
26. The service of the message is the real transcendental vibration. Don't be falsely proud, brother; come back to that.
27. Kalidāsa Nag, that Master Masay, One day said in the public assembly,
28. That Kali-yuga's mission was killing the whole world and Lord Caitanya's message is locked in a cage.
29. Oh shame! Brother, aren't you at all embarrassed. Behaving like businessmen to increase your followers?
30. Our master has said to preach; Let the neophytes go in the temples to do nothing but ring bells.

31. All these are not our master's preaching methods; These are the things done by the caste goswamis.
32. But just take a look at the miserable condition that's arisen: Everyone has become a sense enjoyer and has abandoned preaching.
33. Now the temple doors also are starting to be locked. Go and preach this Bhāgavata-dharma; don't delay any longer.
34. Within this Earth there is another Earth whose sound is the unequalled penetrating force.
35. (There is a Bengali proverb) "The mullah runs just as far as the mosque" (and no further), put an end to this false preaching today!
36. Up to the borders of the seas, all over the earth., pierce the walls of the universe; all assembled together preach the transcendental vibration.
37. Then our master's worship will be in proper order. today make your firm promise; give up your political play.
38. On this very day, coming together, make your comment; the five of you together, and decide what must be done.
39. You have become renouncers, my brothers, so renounce everything. But if you renounce the instruction of the spiritual master, what kind of renunciation is that?
40. One who renounces the bona-fide spiritual master, or one who tries to enjoy at the expense of his spiritual master, are both useless. First become the servant of your spiritual master, then you will be able to understand these conclusions.

41. Because there is only one God, if his wealth increases, a saintly person renounces all such material desires for profit, adoration and prestige.
42. Your gold, my brother, is the source of sense enjoyment. Prabhupada has made this meaningful statement.
43. Give up your riches for preaching: Sit down together and make some special consideration.
44. The Supreme Lord says Himself that, "Everything is Mine along".
45. Prabhupada gave this final instruction. Take care: do this in all respects, completely.
46. Otherwise all your efforts will simply go to waste. Oh saintly ones, beware: afterwards you will repent.
47. Is it really such a difficult task to come together like this? And why does so much have to be said to you?
48. Give up your stubbornness, act for the welfare of others: There is no time to waste!
All my brothers, come: this is the most auspicious time to unite.

49. When will it come to pass that in every room a temple will be established, In every corner of the world.
50. That the high-court judge will be a Gauḍīya Vaiṣṇava, tilaka displayed on his forehead, the glory of all;
51. That a Vaiṣṇava winning votes will be the president of the land, and everywhere this preaching will be extended?
52. The demons loot and plunder the Lord's wealth, while the hapless populace cries, "Alas, alas!"
53. The demons make their plans to cheat the common people, selling whole-wheat flower at 32 rupees a mound.
54. Opening so many factories, will they fill the people's bellies? Out of hunger, the people will be forced to eat grass and mango pits.
55. A two-paisa thread tied around his neck and a man says he is a brāhmaṇa. Just wearing saffron cloth, and a man calls himself a sannyāsī.
56. The householders beg from the sannyāsīs, and the sannyāsīs have crores of rupees in the bank.
57. Every day the influence of Kali-yuga increases, and the poor souls, being oppressed by the age of Kali, cry in agony.
58. Every day ten thousand cows are slaughtered, and the expert leaders eat untouchable foodstuffs.
59. Men of mudlike intelligence increase day by day, and a husband and wife can dissolve their relationship simply by a word.
60. Everyone has become a witch by the influence of the age. Everyone is unhappy due to the absence of the devotees' mercy.

61. The Vaiṣṇavas are famous for being sympathetic towards others' suffering, and that fame will be increased by mature preaching.
62. If eternally pure devotional service to Krishna is awakened in every one, Kali will flee of his own accord, crying "Ha! Ha!"
63. Mahāprabhu's message is praninam upakaraya, act for the welfare of others. This is the storehouse of happiness both now and after death.
64. So much work has fallen into your hands: Everyone should join together and do something about it.
65. Vāsudeva-vipra paid his obeisances to the Lord and said, "Please deliver all the living beings."
66. "Give all their sins to me, who am most fallen, and relinquish all the suffering of the unhappy souls."
67. He was the best Vaiṣṇava, para-duhkha-dukhi, fe found no happiness in gratifying his senses.
68. What kind of compassion can the nondevotee show? He simply commits offences with his daridra-nārāyaṇa philosophy.
69. The Vaiṣṇava's mercy is scientific. Without the mercy of the Vaisnava, the world is simply insurmountable Maya.
70. If there were a kingdom of Viṣṇu and Vaiṣṇavas on earth, then everyone would be happy, say the saintly persons and sages.

Eighth Vaisistya
71. Why do people cry for rāma-rājya? The only cause of such a rāma-rājya would be a God-centered kingdom.
72. Kṛṣṇa sat Yudhiṣṭhira on the King's throne and the whole world became full of wealth and fortune as a result of the good qualities of the Vaiṣṇavas.
73. The rivers, streams, trees, fields and hills were all producing abundantly: And the cows were so full of milk that they floated in the abundance.
74. The birds, beasts and animals were all free of envy: In the Vaiṣṇava kingdom there is perfect saṁsāra.
75. The whole world in ecstasy would sing the glories of Hari. Seeing this, the Vaiṣṇavas' heart danced in ecstasy.