A Few Words About Kirtana Styles (by Prananatha das) 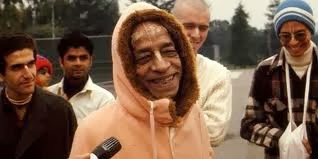 Prananatha dasa: Srila Prabhupada is opposed to SPECULATIVE KIRTANA STYLES. Srila Prabhupada’s personal style of simple chanting in a pure and melodious fashion did not change when he was in India. Historically speaking, it can be traced that in the late 60’s and early 70’s however.

Western devotees coming to India had no place to stay but in some Gaudiya Math temples. In some of these temples all different kinds of mantras were chanted without restriction. Although these mantras did not seem improper, Srila Prabhupada did not want us to use them in our temple kirtanas.

"With regard to your question about Bengali style kirtana and mrdanga playing, one or two styles is best. To introduce more styles is not good. It will become an encumbrance. Who is that Krsna das Babaji who is teaching? If we introduce so much emphasis on style of kirtana, then simply imitation will go on. Devotional emotion is the main thing. If we give stress to instrument and style then attention will be diverted to the style. That will be spiritual loss." (Letter to Satsvarupa Goswami, — New Vrndavana 30 June, 1976)

However this form of kirtan filtered into our movement very quickly since it was new and exciting and therefore rapidly accepted by the kirtan leaders. Variety is the spice of life. This variety however, did not actually please Srila Prabhupada. Now one may say: “Okay, I accept that Srila Prabhupada wrote about exclusive Hare Krsna kirtana which he desired his followers to sing. And I accept that Srila Prabhupada himself always lead kirtanas by chanting the maha mantra and never used the other types of chants often used by Bengali devotees.

But did he ever get personally involved in correcting improper chanting?” CHANTING MELODIES Srila Prabhupada was very strict in the melody sung during the mangala-aratika. He wanted the morning melody and nothing else. Before the opening of the Vrndavana Krsna Balarama Temple in 1975, one morning Srila Prabhupada called his secretary into his room and complained about the singing.

The devotee who led mangala aratrika kirtana had chanted melodies other than the morning melody. Srila Prabhupada said that he did not like the singing in the morning. He stated that the morning melody must be sung throughout the mangala-aratika and no other melody should be sung. He then demonstrated how the singing should be done by singing the first verse of the Samsara Prayer.

Srila Prabhupada was pleased and seemed to enjoy the kirtana but unfortunately at the end of the kirtana, the secretary fell victim to speculation and sang a couple of “jaya radhe’s”. “Srila Prabhupada looked at me with eyes blazing like fire… Voice choked and gagging, I ended the kirtan immediately without further formalites, never again to make the same mistake.

Prabhupada never ended kirtans with various extra mantras, especially not “jaya radhe,” so why should I?” Srila Prabhupada didn’t want his followers to chant Jaya Radhe. He explained that Sukadeva Gosvami did not feel himself qualified to chant the name of Radha in the Srimad-Bhagavatam and therefore only indicated her name with the word “aradhana” while describing the topmost gopi friend of Krsna.

“CHANTING JAYA GURUDEVA…?” Srila Prabhupada objected to the chanting of “Jaya Gurudeva” since he considered it to be a direct insertion into our movement from the sahajiya sampradayas in Bengal who always say things like “Jaya Gurudeva,” without referring to any particular guru. Prabhupada criticized this as impersonal and did not want it chanted by his disciples.

The secretary immediately ran downstairs, danda in hand, and started pushing aside the crowds of ecstatic chanters to get at the leader of the kirtana. He could still not hear exactly what was being chanted, and neither could he imagine how Srila Prabhupada could hear it, but with full faith he plunged through the crowd expecting to soon be close enough to know who was leading the kirtana and what it was that he was saying before the Hare Krsna mantra.

When he was about two meters away from the leader he saw that it was Prthu Putra Swami leading the kirtana and then he finally heard that Prthu Putra Swami was faintly saying “bhaja” before each Hare Krsna mantra. With this confirmation, the secretary demanded, in the name of Srila Prabhupada, that he not chant that before the mantra and that he never do it again.

This caused a bit of a pause in the kirtan while everyone tried to understand what was going on, but before too long the secretary was again going back upstairs and the kirtana was being chanted correctly. Srila Prabhupada asked for a report of what happened and was satisfied that the mistake had been corrected. One should never chant anything before the mahamantra including “japa”, “bolo”, or “bhaja”.

CHANTING “GAURA NITYANANDA BOL…?” One morning in the winter of 1975, after the temple was opened, Ananda prabhu was leading the kirtan. Ananda prabhu was a Godbrother of Srila Prabhupada who had been living in our temple for many years, humbly engaged in serving the devotees with great love and devotion. He was the personal cook of Srila Bhaktisiddhanta Sarasvati and was extremely expert in preparing emergency medicinal herbs when the need arose (as when Saurabh das was bitten by a scorpion but was saved by Ananda prabhu’s timely herb application).

He was also an enthusiastic kirtana leader. Srila Prabhupada was in his room as usual during the mangala aratika kirtan and his secretary was in the room next to him waiting for some order or command. The kirtan was loud and the speakers, combined with the reverberation of the hall, projected the sound into Prabhupada’s room with great ease. Prabhupada called his secretary into his room. The secretary already knew what was going to happen since he was trained by him the previous year about standards for kirtana. Ananda Prabhu was chanting “gaur nityananda bol” & etc.

Srila Prabhupada told the secretary to go to the temple room and stop Ananda from singing the kirtana. The secretary was shocked. This was the first time that he ever had to stop one of Srila Prabhupada’s own God brothers from singing a kirtana. But he dutifully marched off to the temple room to fulfill the order. Afraid of making an offense or being crude the secretary did not feel good about the matter yet he managed to mutter out some words to the effect that Prabhupada didn’t want this mantra in the temple and that would he please chant Hare Krsna instead.

Srila Prabhupada was extremely determined that the kirtan standard be maintained and not changed by the introduction of “other” mantras which were commonly heard in temples and maths. ISKCON’s most famous kirtana leader also liked to chant “gaura nityananda bol.” Although very few devotees know this, Srila Prabhupada said that he did not like those kirtanas and that that devotee ruined kirtana.

CHANTING “GAURA GAURA GAURA…?” As far as standards go, Srila Prabhupada’s instructions could not have been more specific. During one of Srila Prabhupada’s stays in Vrndavana he was attending the evening kirtanas and classes led by his disciples due to his being sickly and unable to speak. One night Srila Prabhupada’s disciple, Bharadvaja dasa, chose to sing a song which he said he got from a book by Gopal Bhatta Goswami.

The devotee could not give a proper explanation at that moment. Srila Prabhupada said that he never wanted to hear that again in the temple and that the temple president should never allow such kinds of “speculation” in kirtana. He then went on to specifically describe how kirtana should be done.

A. For mangala aratika: the samsara-dava prayer, then Sri Krsna Caitanya (panca tattva maha mantra), then Hare Krsna mahamantra, nothing else.

B. For the guru-puja: the “guru-prayer” (that’s what he called it) Sri Krsna Caitanya (panca tattva maha mantra), then Hare Krsna mahamantra, nothing else.

D: For all aratikas this basic pattern should be followed. The chanting of Sri Krsna Caitanya (panca tattva maha mantra) should only be for three times, not more.

E. No one should sing a bhajana unless all the devotees know what the song means.

F. No one should sing songs in Vrindavan temple that are in languages which the people do not understand. Yasomati-nandana may be sung since the people understand that. In regards to “D” above, Srila Prabhupada specifically placed this restriction on the chanting after one incident with Isana prabhu in Vrindavan. In July of 1974, when Srila Prabhupada first moved into his new quarters, kirtanas were being conducted in his room in the afternoon and then he would give class.

On one of the first days, Srila Prabhupada’s disciple Isana Prabhu, who at that time was doing what was to be later known as FATE doll exhibition, led a kirtan. He was simply repeating the Sri Krsna Caitanya mantra over and over again, perhaps for 15 times, when Srila Prabhupada demanded that he stop and chant Hare Krsna.

It was after this that Srila Prabhupada became quite strict on the number of times the mantra was sung. “BHAJA” OR “JAYA” SRI KRSNA CAITANYA? In the middle of 1977, ISKCON devotees noticed a sudden change in the way the panca tattva maha mantra was to be chanted. Up to that point, all of the kirtanas Srila Prabhupada had led, both in person and on recordings displayed the song as: bhaja sri-krsna-caitanya prabhu-nityananda sri-advaita gadadhara srivasadi-gaura-bhakta-vrnda.

Every devotee sang this song in this way in every kirtana. However, in May of 1977 Srila Prabhupada became very displeased with the kirtans of the group in the asrama next to Krsna Balarama Mandira in Vrndavana. There kirtans were taking place with the following speculated mantra, “(bhaja) nitai gaura radhe syama (japa) Hare Krsna Hare Ram.” Srila Prabhupada then requested the devotees to stop chanting the word “bhaja” before our Panca-tattva maha mantra since the word actually is not part of the mantra.

There is no word which prefaces the mantra which specifically reads “sri krsna caitanya prabhu nityananda sri advaita gadadhara srivasadi gaura bhakta vrinda.” This mantra can be read in either Bengali or Sanskrit letters on the walls of every temple in Vrindavan or Bengal as it is one of the two essential mantras for Gaudiya Vaisnavas. Then Prabhupada thought about using some mantra from the Caitanya-caritamrta which he considered might go, “jaya sri krsna caitanya prabhu nityananda, jayadvaita gadadhara srivasadi gaura bhakta vrinda.”

His Divine Grace had his servants and sanskritists look it up to see if they could find it. After a thorough search they realized that there was no mantra like that and that the closest mantra was “jaya jaya sri-caitanya jaya nityananda jayadvaita-candra jaya gaura-bhakta-vrnda” which was not what Prabhupada wanted. Nevertheless, in order to definitively distinguish ISKCON from the other chanters across the road, Srila Prabhupada insisted on the change from the using the word “bhaja” to “jaya” preceding the mantra.