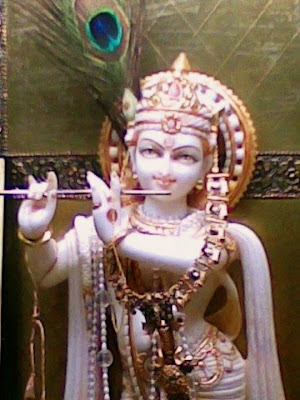 Thanks Bhakta RD, Yes millions of people of all races already worship Krishna. Krishna accepts everyone of all races and so has ISKCON. All races are included in ISKCON. Yes, the Hindu smartas wanted to keep control the Vedic religion only in India, but Krishna is the same God for everyone, not a particular race, culture or etc.

Srila Prabhupada had hundreds of people from each race, and temples in all different countries, books in different languages etc., and that was all there all along. Yes, people who said only the Hindus should worship Krishna are a type of racist. Krishna says he is the father of all beings, and that was implemented in ISKCON.

And some fools wanted to convince Srila Prabhupada to stop worship of Krishna worldwide by all races, castes and backgrounds, saying his Krishna religion is bogus because its only for Hindus and not other races. Sorry, thanks to Srila Prabhupada the worship of Krishna is permanent now all over the planet among all races and countries and languages. Even some of his God brothers complained he was giving Krishna to the mlecchas etc.

Tomorrow, there will be thousands of people of all races and religions, white, asian, african american, hindu, muslim, they will all be out there worshiping Krishna anyway, with or without any of the caste smartas, or even us. Its a permanent fact. Yes, Krishna worship is going to go on no matter what they say, or anyone else says, its been going on for thousands of years and will be going on for thousands more. No one is going to stop it. Its going to go on for the next thousands of years with or without them, or us, or anyone else,

Many people have tried to stop Krishna worship, starting way back with Kamsa, it did not work, will not work, has not worked, cannot work, its called dreaming in color. So yes, its now become a cultural fact all over the world and that means its no longer in the control of the smarta Hindu caste, its too far wide spread now, and its out of their control. Its now in the grasp of all classes, races, countries and etc. So yes, Srila Prabhupada broke their caste and race grip on the Krishna worship program. Its now expanding in all nations, races, backgrounds, languages etc. and will continue to do so ongoing. ys pd
Posted by krishna1008 at 6:02 PM