Another Reason Why Women Should Not Be Leaders in ISKCON 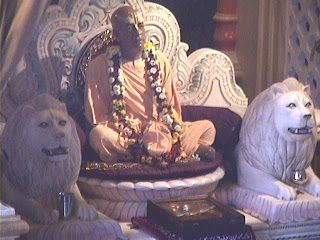 [PADA: Original article seems to have been erased from the ISKCON Dandavats site.]

Another Reason Why Women Should Not Be Leaders in ISKCON

...Never be attached to not doing your duty (Bhagavad-gita 2.47) "According to the rules and regulations that are mentioned in the Agamas, women can faithfully render devotional service to Lord Visnu while remaining devoted to their husband, and sudras who have taken initiation can also worship Lord Visnu." (Hari Bhakti Vilas 1.195)

Regarding the recent text about the unhappy affairs in the life of a married female GBC. There is another side to the story. While everyone is giving Dina Sarana Mataji a shoulder to cry on, no one thinks to ask how this situation came to pass. If there is a house fire, the inspectors from the Fire Department will go through the debris to search for the cause. If a plane falls out of the sky they search for the black box and try to find out the cause. If there is a road accident, the police study the scene and try to determine what happened and why. For everything there is a cause so in the same way, what is the cause of this tragedy?

Now I am by no means trying to besmirch the character of Dina Sarana Mataji, but it seems that this whole episode has come about because she failed in her Stri Dharma. That instead of faithfully serving and taking care of her husband she was seduced away from performing her prescribed duties by the GBC of Germany, Ravindra Svarupa Prabhu who wanted her, not a man, to personally assist him.

[PADA: OK, this means that it is the GBC's (mostly men) leaders and gurus who are the primary persons causing problems in marriages, just like they caused countless other marriage problems all over the society. Does no one recall what happened when the GBC gurus over-lorded Sulochana's wife? And how many GBC gurus actually ran off with the wife of a follower?

Is that not what the recent complaint is about Mahanidhi swami, that he interfered with someone's wife -- his own alleged female disciple? PADA has recently looked at the Mahanidhi site and its still plastered with all kinds of "Radharani ki jaya" photos, as if nothing wrong has happened.

The manipulation of women and marriages is not being done by the women as a class, its seems to be much more or a major deviation and problem coming from the male leadership of the ISKCON society. The track record is that the (mostly men) leaders have a tendency to dominate and over-lord others, including other's wives. Not sure really how this is the fault of the women who are mainly the victims of this manipulation policy? The women as a class are victims of these heavy handed men and their bogus policies towards women. Its not clear why this means the women are to be blamed for any of these problems?]

*** She thus started to focus her attention on the needs and desires of Ravindra Swarupa Prabhu – all in the name of Krsna Consciousness and devotional service mind you – but gradually over the course of time she became consumed by such duties outside of the home and her husband was left in the cold, seldom seeing his wife. So naturally some other woman saw an opportunity here to fill in where the wife was neglectful.

[PADA: The wife was being neglectful? No her husband was being neglectful -- because her husband is allowing these bogus gurus to take over their own wives. These husbands should have complained long, long, long ago -- that these GBC leaders have no business associating with, and cavorting with, their wives. That is mainly the fault of the males in the society, they are allowing this policy of exploitation of women, even their own wives, without making proper protest. It means the men as a class are weak.

That is also basically what happened in the child molesting issue, a few of us protested, hardly any of us really, and most of the rest of the men in the society refused to assist PADA and Sulochana in forwarding this issue. They were weak. That does not mean the women are to be blamed because their men "protectors" needed to be the leaders on these issues, and the men have not been.

Some karmis who are friends of ours are also amazed that some "gay gurus" walked all over thousands of big tough men in the ISKCON society. They are astonished at the lack of back bone in these alleged men. So we should blame the women, that the men abandoned the battlefield and the men as a class could not properly resist what Sulochana called "the gay MAFIA"? No, the men have to lead the charge on these issues, not the women? That's not their job description?]

*** Has anyone noticed that Ravindra Swarupa dasa only likes to work with women? There was also the scandal of him appointing Hari Ballabha Mataji as his representative in Germany, and he put her on the PAMHO GBC discussions forum. But all along she had secretly taken initiation from Narayana Maharaja and was passing all GBC correspondence directly to NM.

[PADA: The GBC gurus were working closely with Narayana Maharaja all along, claiming he was their "rasika advisor." He used to visit Tamal in Dallas; He was part of many meetings with the GBC's guru's in their "rasika club"; He was instrumental in helping the GBC write various position papers and so on. He was thus being passed confidential information all along because he was the GBC's close "advisor."]

Of course, there is no evidence we ever were wearing saris. Its just an excuse for these weak men to complain that we did something while they did nothing. So yes, this verse is significant, the men of ISKCON have had a duty to defy and check the gay MAFIA, the women exploiters, the children exploiters and so on, and they failed in that duty because they thought it would be troublesome and cause bodily discomfort. They copped out.

What does this have to do with women no being competent or not? First of all deal with the primary problem, the men leaders are causing troubles, and then the men in the rank and file are not properly opposing, so its mainly the fault of the men that we have had all these problems.]

*** This is not the first time this has happened: Kusha Mataji has admitted that this is the same reason that her 25+ year marriage to Sruta-kirti Prabhu broke up. She was encouraged by the Women's Ministry and other feminist forces in ISKCON to take up the role of Temple President of Honolulu – again, all in the name of devotional service and Krsna Consciousness. This took up most of her time and energy, leaving nothing for her prime prescribed duty of Stri Dharma. She thus grossly neglected her husband. Another woman saw that the husband was neglected and she made it clear that she was ready, willing and able to fulfill such duties, and they got married after he divorced Kusha Mataji who had already symbolically divorced her husband by giving up her prescribed duties.

[PADA: Sruta Kirti is another prime example of a man who has never been heard protesting all the exploiting. Where has he been all this time? Where has he protested all the abuses? Instead, he is looking for another woman while all this chaos is going on?]

*** It is better to engage in one's own occupation, even though one may perform it imperfectly, than to accept another's occupation and perform it perfectly. Duties prescribed according to one's nature are never affected by sinful reactions. Every endeavor is covered by some fault, just as fire is covered by smoke. Therefore one should not give up the work born of his nature, O son of Kunti, even if such work is full of fault. (Bhagavad-gita 18.47-48)

To me the fault is clear: it is shared by the persons who seduced these senior women into giving up their prescribed duties and to the women involved for giving them up.

[PADA: OK good, these women were mislead. Who mislead them? The bogus men.]

*** But we all know that is not politically correct, so instead the neglected husband will be blamed. Why? Because he is the man. Yhs Jambavan dasa

[PADA: Well yes, the men are causing these problems, especially the bogus gurus. and the women are victims, that's the pattern here. However, none of this proves that women should not have a say in ISKCON affairs. As many folks have commented, had women had a bigger role in ISKCON, especially the children's programs, the children never would have got mass molested like this, the women would not have tolerated children being treated like this.

Anyway we have some stalwart women fighters in the PADA program.

We'd rather be in a foxhole fighting with even one of them if we were in an actual war, rather than 10,000 men compromisers, who would get so frightened they could not even open their eyes to see what was going on. In fact, some women were the first people to step forward and give us the original stories in our newsletters and such, so a number of the women have fought way better than many of the men, and its sad to have to report that.

In any case, the author of this paper does not seem to target the bigger issues here, he seems to want to say that women should not be having a say in our affairs, when some of our women might have something important and useful to say. Its also called -- blaming the victims. ys pd]
Posted by krishna1008 at 5:59 PM