[PADA: There are many such official medical link sites to the health benefits of bitter melons. Older people, including devotees -- or even especially devotees, can suffer from a slow down of bodily metabolism resulting in -- diabetes, cancer, tumors, liver infections, and other toxic blood conditions. Bitter melons in the diet seems to be a good counter-acting agent. The breast cancer society recommends them for women with cancer, or to be taken as a preventative against cancer.

Around here we can get them at various Indian shops, sometimes at larger market stores like "Food For Less" (but they seem to be a little older and mushy there). They also seem to be regularly available in various Philippine markets (often called some sort of Sea Food Markets). There is also a big "Oriental Grocery" store locally that carries them.

If you cut them open and the seeds are pink, that means they are not very fresh. Try to avoid those. Try to find a store that have ones that have white seeds when you cut them up, that means they are at their freshest. We get ours at various Philippine / Oriental Market shops because they are the most fresh there. They do not seem to last long and will get ugly spots on them if not used fairly soon.

We cook ours no longer than two days after purchase. You can boil them and add curry powder (which also purifies the blood), and save the cooking water to have later as a bitter tea, or fry them up until they are a little crispy. They cook up fairly quickly, do not over cook and remove all the good ingredients. They taste, well, bitter. You will feel better though. ys pd] 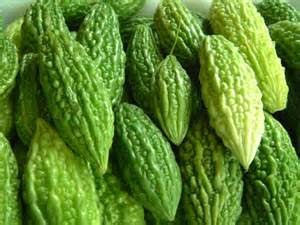