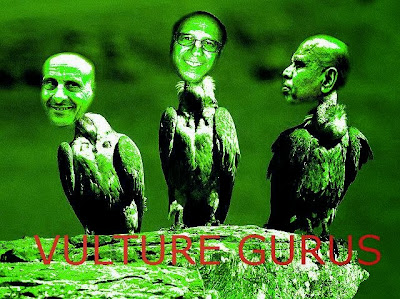 Kudos to Krsna-krpa Prabhu and Ramananda Raya Prabhu, both long-time devotees dedicated to performing the yuga-dharma, with no thought of comfort, gain, name, fame, position, or honor. No doubt that Srila Prabhupada is happy with them.

I could only watch the clip of Bollywood dancing at an ISKCON Ratha-yatra for a few seconds, as I found it vulgar, shameful, and a disgrace to Srila Prabhupada's good name. We can only wonder what the next notch down is in ISKCON's degradation, and pray that at some point the GBC awakes to its responsibility to stop the rot, lest ISKCON become just an empty shell entirely bereft of Srila Prabhupada's mercy, and not worthy of consideration by anyone seriously interested in spiritual life. BVKS

[PADA: Right, so the "acharyas" who (A) voted in Bhakti Vikas swami as an acharya -- because they are bona fide, are simultaneously (B) promoting -- policies / programs / public functions that are "vulgar, shameful, degraded, and a disgrace to Srila Prabhupada." This is the whole problem we are having with folks like Bhakti Vikas swami, he is making mutually exclusive contradictions which violate all the codes of shastra.

He says (A) that the actions of the Lord's direct guru successor and acharyas are always and eternally pure, simultaneously -- (B) the actions of his acharyas are vulgar, shameful, degraded, and a disgrace. This is a contradiction: i.e. how can the acharyas be both -- pure and degraded -- all at the same time? He never explains.

Nor does BVKS ever explain why he is always insulting the acharyas by claiming they are acting like debauchees and asuras? BVKS says (A) that his GBC pals are "guru successors to God", simultaneously (B) they are shameless rascals making all these deviations. Yet he has not explained how the guru successors to God could behave like people who are "not taken seriously be anyone interested in spiritual life."

The problem is that BVKS is empowering and enabling these deviations by saying the orchestrators of all these deviations are gurus, acharyas and parampara members. This is the exact problem we had with the molesting issue, we said there is a problem, and then the BVKS types checked and harassed us, and said we are "offending the GBC's acharyas."

And in that way people like BVKS empowered, enabled, defended, protected, emboldened, aided and abetted all the molesting and other crimes by defending the orchestrators as some sort of messiahs, and thus -- at the same time -- his policy got us BANNED, BEATEN AND SHOT TO DEATH.

Does BVKS even believe there is a God anywhere? How could he support the banning, beating, mass molesting, and assassination of the Lord's vaishnava's program? Worse, BVKS got his sannyasa from Jayapataka swami, the number one henchman who made Mayapura into a place of worship of molesters as gurus, as well as all sorts of degraded crimes and so on and so forth.

In other words, BVKS is a total hypocrite. He says he is against the GBC gurus for all sorts of deviations, then he turns around and says the ritviks are bogus because they do not want to promote the worship of his deviated messiahs. He wants it both ways. Sorry, you cannot say people are simultaneously: (A) deviants and at the same time (B) God's successor acharyas.

This is why ISKCON has descended into madness, and no small amount of degradation, molesting, and crimes of all types, BVKS is enabling and empowering the criminal element deviants and crooks to be the messiahs of ISKCON. He is one of the principle and pillar persons who has taken ISKCON on the path to hell with his odious process of supporting deviants as acharyas, and he will have to go there with them for that offense. At least that is what shastra says! ys pd]
Posted by krishna1008 at 7:28 AM