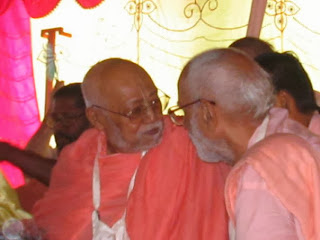 
[PADA: Bhakti Ballabh Tirtha is a disciple of the Gaudiya Matha's Madhava Maharaja. When we were in India in 1972, Madhava Maharaja attacked and insulted Srila Prabhupada -- and he said that ISKCON could not use the title of "Prabhupada." So it is a little amazing that the team that originally insulted Srila Prabhupada later on became some sort of consultants and "gurus." We discuss this odious 1972 incident in this video:

Anyway Madhava Maharaja, Sridhara Maharaja and Naryana Maharaja all said "you need a living guru" and guess what?, they are all dead and gone now. So their followers no longer have them as their living guru. Bhakti Bhallabha Tirtha seems to be on his way out as well. Srila Prabhupada said clearly, "among my God brothers no one is qualified to be acharya," and yet some of his deviated followers tried to prop up these God brothers as some sort of acharyas after 1977.

As some devotees said to us recently, these bogus gurus will never change, they just have to die out. It seems that is happening more and more. Bhakti Bhallabh Tirtha has also been seen "consulting" with some of the GBC's gurus, as was Narayan Maharaja one of the GBC guru's "consultants." These consultants were being used to try to prop up the credibility of the GBC gurus, but it seems their "consultants" are being taken away one by one. The good news is -- as more of these "guru" people drop off by the wayside, it is making more and more people decide to simply take shelter of the bona fide acharya Srila Prabhupada, and to read his books, and to take shelter of his instructions. ys pd]

Most Revered Gurudev His Divine Grace Om Vishnupad 108 Sree Sreemad Bhakti Ballabh Tirtha Goswami Maharaj got admitted today morning at 6.15 AM in the ICU section of Guwahati Neurological Research Center (GNRC) under Dr. N. C. Borah, neurologist and chairman. His Divine Grace is diagnosed with brain haematoma after coming here. The bleeding in the brain is quite considerable in size.

Dr. N. Barua, a neurosurgeon, also visited His Divine Grace. Both neurologist and neurosurgeon along with a team discussed the critical nature of the case. After an elaborate discussion Dr. N. C. Borah came back to us with this message, "The bleeding might have happened yesterday evening. This is a second stroke in the last 2 months. Usually surgery is performed in the case of brain haematoma. But given his age and the medicines he is taking, surgery is not suitable. On a conservative basis we will give him medicines. We can only hope that he will repond and recover. However, there is no surety. Pray to the almighty. He is the only One who can help."

The message has been conveyed to prominent God brothers of revered Gurudev. Srila Bhakti Bhushan Bhagavat Maharaj said, "Harinam is the only shelter. In all maths there should be continuous chanting of Harinam. Devotees should take one hour turns and continue to chant all through the day, without fail. The chanting should be in loud voice while sitting on the same aasan." The sadhus and now the doctors say only one thing 'PRAY' - anather nath daki tava nam ekhona bharosa tumi (Oh! Lord of the destitute I call your names loudly, You are my only hope).

While it is true that we are trying to reach the best available neurologists and neurosurgeons across India to get their opinion and advice, there is no decision or consideration at this stage for shifting His Divine Grace outside Guwahati. Many doctors are of the opinion that we are currently at one of the best neurological centers in India under the assessment of an expert and competent doctor. Any plans of moving outside Guwahati will be updated to you.