[PADA: Thanks Jo Jo, yes, this really does say it all. All of the people who opposed me all along are connected to promoting the Gaudiya Matha's and GBC's gurus, like Bhakta das has been. And now we find that our other critics like Sanat / Mukunda / Prahlad / Janardan are also siding with the people who are promoting Bhakta das, and that means, they are all compromised with the Gaudiya Matha and GBC gurus programs. They are still in bed with the pedophile pooja program, and that is why they do not like me all along.

Why are these folks all agreeing with the same people who are promoting the cheer leaders of the homosexual pedophile guru program like Bhakta has been doing all along? They attack us and they love the pedophile pooja pals?

Because they never left that program.

They are not ritiviks, they are not Prabhupadanugas, they are still in bed with the worship of pedophiles program. And that is why they never liked us all along and they kiss the feet of Bhakta das, who has been exhorting us to accept the Gaudiya Matha gurus (who have been promoting the GBC's gurus like Gopal Krishna, Tamal, Bhavananda etc.) and Bhakta has been directly exhorting us to promote some of the GBC's gurus, and now it turns out our critical pals are with that program. These people kiss the feet of the people who promote the pedophile guru's program, because they never left that program, and that is proof plenty that they are compromised with that deviation.

And that is why they oppose me to this day. So yes, that is what all this is about, these people are in love with people like Bhakta das, because he loves the Gaudiya Matha gurus who promoted the GBC's pedophile pooja, and Bhakta even wants us to surrender to members of the the GBC / homosexual / peodphile acharyas program itself, and he says we need to work with that GBC gurus program. These Bhakta / Gaudiya Matha / GBC guru groupies pals do not get it, they think we are going to surrender to their pedophile messiah program if they keep attacking the Prabhupadanugas, that will never happen. ys pd]

Now we are finally making progress! The Sanat / Mukunda / Prahlad team are now making videos with Bhakta das, a leader of the program to bring Srila Prabhupada's ISKCON over to the deviated post 1936 Gaudiya Matha. That means these people are working with advocates for the Gaudiya Matha's (bogus) gurus program. OK lets not forget, the post-1936 Gaudiya Matha made homosexuals into their acharyas. And the result was: dissenters were murdered, Srila Prabhupada was shunned, insulted and ostracized etc, so -- lets go and accept them as our authorities!

And they called Srila Prabhupada a paccha grhastha and so on and so forth. Very oddly, Bhakta das and Guru Kripa were saying exactly that originally in the early 1980s, that anyone who went to the Gaudiya Matha was -- a deviant, and was supporting insults to Srila Prabhupada. Then, they went there, following the GBC's gurus? And now the Sanat / Mukunda / Prahlad team are supporting the persons who are promoting the Gaudiya Matha gurus, ok like Bhakta das.

And lets also not forget that Srila Prabhupada said his God brothers are envious of me, they are fourth class, tenth class, they are giving me depression, repression and oppression and so on. And now it turns out, these Sanat / Mukunda / Prahlad (UK) people are bed with these Gaudiya Matha folks, because they are making videos with the biggest defenders of the Gaudiya Matha and their bogus guru process.

And Bhakta das is implicated in illegal actions over and over:
http://krishna1008.blogspot.com/2013/06/how-bhakta-das-william-benedict-ruined.html 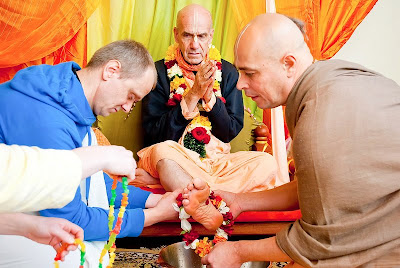 Trivrikrama was voted in as guru at the recoronation of Bhavananda.

The God brothers of Srila Prabhupada are the people who insulted him all the time and simply, did not work with him. Bhakta's Gaudiya Matha guru is BV Puri maharaja, who was a big promoter of Gopal Krishna and the GBC's guru program. Gopal Krishna is also voted in as guru by the same people who made Bhavananada, Kirtanananda, Jayatirtha and others into gurus.

Anyway this is great news, it finally shows that the deviant siddhanta of the Gaudiya Matha was adopted by the GBC in 1978, then by Bhakta das, and now its being promoted and accepted in the Sanat / Mukunda / Prahlad program. So this is why Srila Prabhupada said, if we associate with these Gaudiya Matha people, then they will "harm my movement." Anyway, we are always glad when we can connect the dots on these things.

They are all promoting the biggest  defenders of the Gaudiya Matha and GBC gurus like Bhakta das. OK did we forget to mention the Gaudiya Matha supported homosexuals and deviants as acharyas? And now these people are all working together. And Trivrikrama is a good friend of Jayadvaita, who says gurus are engaged in illicit sex with men, women and children. And now they are all birds of a feather! This makes it all very clear! Yep, how did you guess, the Sanat / Mukunda / Prahlad team are supporting Bhakta das, because they STILL want us to accept the homosexual guru program of post-1936, and the homosexual and pedophile guru program of post-1977. They are still with that group, apparently because, they never understood that homosexuals and pedophiles are not messiahs. ys pd
Posted by krishna1008 at 11:15 AM