Dusyanta dasa's article -- Who is Guru? (From Rocana's -- Sampradaya Sun) 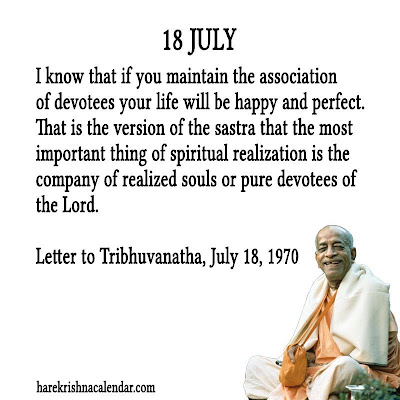 Having enjoyed reading the presentations by Vraja Vilasa Prabhu over the last week I would love to continue the debate to hand. Mainly I agree with some of the points that Vraja Vilasa makes, but there are certain holes in his presentation and his representation of what he thinks Srila Prabhupada is stating.

[PADA: Many supporters of the GBC's gurus say that we can "act as gurus." However, Srila Prabhupada says when the layman starts "acting" as a brain surgeon, there will be chaos and people will die -- and that's all. We therefore do not "act like" we are another Jesus -- either we are as pure as Jesus -- or we are not. There are simply no instructions from Srila Prabhupada for neophytes to:

* Sit on a Vyasasana;
* Declare that they are the "current living link in the paramapara";
* To "act like" they are another Jesus and accept the sins of many disciples;
* To ride around in big Lincoln Town Cars when the children of ISKCON are being starved and fed rotten oatmeal, and so on and so forth. This is unauthorized, and its a failure.]

DD: They act has already proved a failure in ISKCON.


[PADA: OK, this sentence does not even make grammatical sense? Dusyanta is not clear, does he mean their play acting as messiahs is a failure, or what exactly?]

DD: I am not sure this is a wise statement to make. I don't agree with Prabhu that we should copycat Them, I don't think this is what following means. Following does not mean to do what They have done or do. Following means to act according to Their instructions and writings.

So we cannot promote the GBC / Gaudiya Matha / Rocana program of "copy cat" of the pure devotees. For that matter there are some sahajiya sects where they "dress like" and think they are "acting like" Radha and Krishna, but then they simply engage in mundane debauchery. Srila Prabhupada says such persons who imitate God and Guru are offenders are gliding towards hell. So the ritvik system is the right system because we do not "act like" we are the acharyas, rather we "follow their instructions" to only be layman, agents, preachers, and proxies for the acharyas. Srila Prabhupada also said we are his "deputies."]

DD: If we are to follow Srila Prabhupada's activities then we need to be as pure as Him.

[PADA: Dusyanta is confusing "the followers" of a guru with "the successors of the guru." No, the followers do not have to be as pure as their acharya. When I drove a taxi in San Francisco there were sometimes prostitutes in my taxi cab who wore pendants of Jesus. These prostitutes are worshipers of Jesus, but they are not claiming to be as pure as Jesus. Even in Dwarka there were prostitutes 5,000 years ago. They are followers of Krishna, but they never claimed to be the successor gurus to Krishna?

A follower follows as best they can, that does not mean they have to be the next acharya? Dusyanta is making an impossible standard, in order to follow the pure devotee, we have to be another pure devotee ourselves? Then no one will bother. Most of the followers have anarthas and they are not yet purified from them, so to expect them to suddenly be pure is foolish and unrealistic.

A worshiper of a pure devotee does not require to be as pure as He is. A successor to the guru is yet another thing altogether. Yes, the successor has to be as pure as the acharya is, but not the neophyte followers. We neophytes follow in the footsteps of the acharyas, that means -- we follow their ideas and process of hearing and chanting and so on, but that does not require that we be as pure as they are. Dusyanta is confusing the rank and file followers with the successors.]

DD: If we are to follow His instructions then He has given instructions for all manner of people, not just one type of person. We don't want to get into the realms of applying the same principle to all people as far as accepting a Guru. There are different ways of accepting a Guru and that is exemplified by the Disciplic Succession, They don't all just follow the same route. There are many different examples in the Disciplic Succession that we can follow. And for ISKCON devotees, Srila Prabhupada has written of those different examples, so what may work for one devotee does not necessarily work for all.

[PADA: There is however only one standard for the acharya, as Srila Prabhupada says, he has to be a resident of Krishna loka, an uttama adhikary, a "parisad" associate of Krishna and so on. So it does not matter if different pure devotees have preached using different process according to time and place, all of them are pure.]

DD: If we just take the same situation that Srila Prabhupada personally exemplifies and try to copycat the same situation after He has departed then we make the same mistake as the earlier ISKCON devotees did in the Zonal Acharya days, and ever since, in my opinion. I don't believe we can follow that format now that the Sampradaya Acharya is no longer physically present. And Srila Prabhupada's written words indicate there are other ways for devotees to follow. I am sure many Ritvik devotees would agree with me on this point.

[PADA: We are not supposed to follow the bogus GBC gurus since they still have zones, guru voting and so on, even today, but Dusyanata is not clear what else has to be done? There are other ways to follow the guru, ok and what is that exactly?]

DD: But don't we have to read ALL of Srila Prabhupada's words for a conclusive pattern to be presented? I don't agree with the Ritvik conclusion, but I can take the relevant points from their understandings. One of ISKCON's problems is that a little knowledge has been a bad thing, and our understanding has been based on just parts of Srila Prabhupada's written words according to the mentality of the presenter.

In this instance if we want to present that a devotee must have a physically present Diksa Guru and that Guru is the only one he can worship as good as God, then we can select the relevant quotes from Srila Prabhupada's Books and make a pseudo-genuine presentation that appears bona fide.

[PADA: That is what Rocana's program has been doing since 1977, making "pseudo-gurus." Worse, Rocana's program says that anyone who worships Srila Prabhupada is worshiping the posthumous, post samadhi and postmortem person, thus you need to worship the living person provided by Rocana's program. Then Rocana's program has forwarded all kinds of debauchees as their gurus, because they never even bothered to find out what is the qualification of a guru in the first place.]

DD: And of course, the opposite is true too. But we have to find absolute constants that fit the rule to be able to present in that way, otherwise it becomes just an unfair presentation, which can put huge pressures onto struggling devotees too. So what is the best way for a devotee to follow Srila Prabhupada? Who actually is a true follower of Srila Prabhupada anyway? And where is this most successful devotee living? And how do we know where that devotee is coming from? We must remain sceptical; we must question all advice because of all the past that exists in ISKCON.

[PADA: OK so why not work with the known quantity, that worship of Srila Prabhupada is bona fide without question?]

DD: One of the main points that doesn't sit comfortably in my book is this rather narrow understanding of the requirement that is taught in ISKCON by ISKCON devotees. That we have to have an uttama-adhikari Diksa Guru who is as good as God, and is the devotees' only worshipable Guru. The word "Sri-Guroh" is never translated in this way, that it refers exclusively to the Diksa Guru. This type of translation is borne out in Srila Prabhupada's definition of the word "Sri-Guroh" in the Caitanya-caritamrta Antya-lila, Ch. 2, and Text 1: "vande 'ham sri-guroh sri-yuta-pada-kamalam sri=gurun vaisnavams ca…"

Srila Prabhupada translates in His word for word to this text as: "of my initiating spiritual master or instructing spiritual master". He gives equality to both Diksa and Siksa Gurus, in that either or both can be the Spiritual Master that we worship as good as God -- not just the Diksa Guru, as has become the concept held by ISKCON devotees and Ritviks. All our previous Acaryas are our Siksa Gurus and none of Them are physically present, yet we can take full shelter of Them all. And our Siksa Guru can easily be the Guru who takes us back to Godhead and the One who we worship as good as God.

[PADA: Right, so the neophytes have to act as limited shiksha gurus / sometimes aka ritviks.]

DD: We may accept a Diksa Guru who is physically present, but there is no instruction that He must be the main Guru of the disciple.

DD: Surely that is for the disciple to decide.

[PADA: So if the disciples in Berkeley decide to worship a machine gun swami, that is fine, because the disciples should decide for themselves if that is bona fide? There should be no other authority other than the brand new disciples in ISKCON? If they decide Mickey Mouse is the acharya, then we all have to follow that process at our local ISKCON temple? Well that is the problem, Srila Prabhupada wanted the senior devotees to decide how the worship should be conducted, not the brand new neophytes?]

[PADA: OK that is the ritvik style system.]

DD: The imperfect presentation I am making is that there are other routes for devotees to take. It's not just this ISKCON presentation or the Ritvik presentation. There is another way(s). We can accept a Diksa Guru for the purpose of initiation, but he does not have to be our main Guru, because our Shiksa Guru can also be the singular Guru, as mentioned in Caitanya-caritamrta Antya Lila, Ch. 2 Text, 1 word for word translation. Sri-Guroh is either Diksa or Shiksa Guru.

[PADA: It says the disciple should have only one diksha guru, not the multiple re-initiations system in current ISKCON.]

DD: No matter who is your Diksa Guru: why not take shelter of Srila Prabhupada and follow Him as our Shiksa Guru? He is no longer physically present so it is not possible to serve His physical presence any longer, but we can absolutely follow and serve His instructions and words after He no longer physically exists. He is our Siksa Guru. He is that uttama-adhikari Siksa Guru that we can worship as good as God, and He can remain in that relationship as Siksa Guru eternally.

[PADA: OK so now you are saying his books are not giving pure divyam jnanam which destroys sins aka diksha? Who authorized you to limit his books? ys pd]