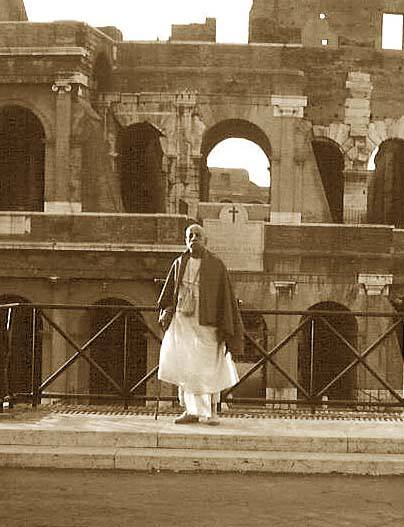 The Time Has Come

ROCANA DAS: The importance of following in the footsteps of the previous Acaryas is an instruction received often by readers of our Vaisnava sastra. At first this decree sounds so simple and easy. In reality, nothing is more difficult for the fallen conditioned soul. The relatively short history of Srila Prabhupada's ISKCON has demonstrated that the challenge of faithfully following the Founder-Acarya's mood and message may seem nearly impossible.

[PADA: Right, the Prabhupadanugas started a nice home program in Vancouver where Rocana lives. These nice Prabhupadanugas have regular programs of: -- bhajan, kirtan; preaching to guests; opulent prasadam; deity worship and so on and so forth. Meanwhile, Rocana has never started any program anywhere, ever that we know of. Instead, Rocana has been preaching since 1977 that Srila Prabhupada is the posthumous, post samadhi, and post mortem person, and basically no one cares what else he has to say since this is very offensive in itself.]

RD: The society established by His Divine Grace does not in the least resemble what he so eloquently envisioned and instructed in his vast writings and audio recordings. Myself and many other followers have expressed, in many ways and words, our grave concern over the wayward direction the bewildered leaders of ISKCON have taken the Hare Krsna Movement.

[PADA: OK the bewildered leaders are saying Srila Prabhupada is posthumous, post samadhi and post mortem, and Rocana is their sock puppet, he says what they say.]

RD: Over many years, we have attempted to provide the 'Fifth Estate' through the Internet medium of the Sampradaya Sun, in hopes of halting ISKCON's decline towards religiosity. Although there have been some rewarding moments and successes in that effort, by and large the slide continues.

RD: The time has come for a more progressive, positive approach based on the realization that most of the aged, entrenched leaders of the GBC/ISKCON are far beyond the point of no return. It is time to start anew. We have learned the lessons taught us by history and now we have an opportunity to apply them.

[PADA: That is what we have been doing since 1977, making new people understand they have to worship Srila Prabhupada, and not focus only on the rotten upper crust managers.]

RD: Before joining together and marching forward, we require a clear direction and a plan. With this in mind, we have written a draft Constitution for the International Society for Krishna Consciousness As It Is. Srila Prabhupada asked on a number of occasions during his ISKCON lila for the disciples to compose a Constitution, but none was forthcoming. The present day GBC/ISKCON leaders have also failed thus far to produce this fundamentally important document. To encapsulate the very essence of sadhana and siddhanta as presented by His Divine Grace is daunting, but also very simple and sublime. It is the spreading of Krsna Consciousness to every town and village that represents the greater challenge.

[PADA: The siddhanta of Rocana and the siddhanta of the GBC are identical, we need a living guru, we need to insult the acharyas by calling them post mortem, where is there any difference between what Rocana says and what the bogus GBC gurus are saying?]

RD: Our topmost Sampradaya Acaryas have concluded that utilization of a formal Society model is the best vehicle to bring about the necessary organization and cooperation required to achieve this task. We, the servants of these Acaryas have been assigned the duty to carry forward this Divine Order, originating with Lord Chaitanya Mahaprabhu. In the not too distant past, these spiritually surcharged groups in our Sampradaya have had at their center the manifest presence of a nitya-siddha, maha-bhagavata, shaktyavesa-avatara.

[PADA: OK well first of all, you need a group. Instead you are promoting Mt. Moab messiah Kailash, king of the desert; Or Dusyanta who says -- he is for the GBC and their living guru idea -- except he will never take any of them as his own guru; Or people like Vraja Vilasa das -- whom no one has ever even heard of, and he has no group either, so you need to find a group.

Of course, lately you have been loading up your Sampradaya Sun site with Mayesvara's writings. OK he is a nice guy, and he is friendly towards us, but he advertises for the GBC's gurus, Gaudiya Matha's gurus, and who knows what else. His program is not going to attract Prabhupadanugas. Ever. OK, at least he has a teeny program in Ojai at his house, but to be honest, its just not on the world wide map of events.

Neither is Ojai a known place for that matter, its just not the place to launch a world wide movement. Never mind Rocana's other hero Kailash is in the middle of absolutely nowhere in Moab Utah, which no one even heard of before, ever. OK its well known to a lot of rattlesnakes, poison spiders, lizards, tumbleweeds, and maybe a lot of scorpions, thats the main population there.

Mayavara's or Kailash's program do not constitute a group, nor are either loyal to any particular group. Mayesvara is for hodge podge basically, because he is favored by folks like the Sridhara Maharaja followers, and he is sometimes with the mainstream ISKCON guru folks: http://www.dandavats.com/?p=9718. And we hate to have to say this to you Rocana, but most people are not interested AT ALL in Sridhara Maharaja's minions, or the mainstream GBC guru's process anymore, most folks are done with that, finished, its over and out for most folks. You are just slower than a pack of turtles to be gradually coming to understand that finally.]

RD: Both Srila Bhaktisiddhanta and Srila Bhaktivedanta Prabhupadas have ordered their followers to continue the mission after they entered into maha-samadhi. Our Srila Prabhupada applied the lessons learned from the tragic failure of His beloved Spiritual Master's Gaudiya Matha.

[PADA: And Mayesvara promotes Gaudiya Matha folks, and their ideas like "you need a living guru." And Rocana advertises for these folks. Here Rocana says, this is the failed process? Why does he advertise for that process then?]

RD: Now, many of us have concluded that the same corrosive elements, so abundant in Kali Yuga, have brought us to the point where it requires that we start afresh with ISKCON As It Is.

[PADA: Except you never advertise for "ISKCON as it is," rather you advertise for these isolated out of the way odd ball projects like Kailash, Dusyanta, Vraja Vilasa, Mayevara etc., projects that are all basically not having much impact, and which have dubious siddhanta views.]

RD: The great Acharya Srila Prabhupada has left us with a clear blueprint for bringing about success, but let us not be fooled into thinking it will be easy. The necessary ingredient is to individually surrender to selflessly serving Lord Caitanya Mahaprabhu by assuming an appropriate duty within the context of a society/army. The great General, A.C. Bhaktivedanta Swami Thakura will empower us all and direct and protect all the surrendered souls. Caitya Guru is within us all, and His desires are identical to all the Brahma-Madhva-Gaudiya Vaisnava Acaryas, and for us, most specifically HDG A.C. Bhaktivedanta Swami, Srila Prabhupada.

With this spirit, let us create a working Constitution so that we can present to all sincere devotees our collective purpose, aims and objectives. Let it contain the core themes of our beliefs and the constitutional principles His Divine Grace has set forth. Building upon the draft Constitution that is now ready for review and discussion, let us refine and complete it.

A ratified Constitution will help us in future to cooperate by curbing the evil symptoms of quarrel and hypocrisy. We all require the quality of humility in order to achieve the highest levels of unalloyed Bhakti. I am thus stating, with straw in teeth, that the time has come for the establishment of a blissful Krishna Conscious Society -- one that achieves great success by following the instructions of our divine preceptor and Founder-Acarya, His Divine Grace A.C. Bhaktivedanta Swami Prabhupada. Working together in his mood, the International Society for Krishna Consciousness As It Is will attract the causeless mercy of Lord Nityananda upon all participants, for they will be opening the floodgates of Love for Lord Sri Krsna.

[PADA: OK well the Prabhupadanuga society is well under way. The question is, will you participate in it? Or will you continue to advertise for your Moab desert messiah Kailash; or Dusyanta who says he has to have a living guru, but he does not want any; Or Vraja Vilasa who has no program whatsoever that we can identify; Or Mayesvara, who is with various "guru" programs, but not the Prabhupadanuga guru program? What are you going to do Rocana? I think you are right however, you are running out of rabbits to pull out of your magic trick hat. ys pd]

[PADA Update: Yes prabhu, Rocana das does not seem to comprehend that his support of the GBC gurus in the early 1980s is what caused all the subsequent banning, beating, molesting and assassinating program to take root. And he has supported the GBC gurus and their "living guru ideology" root idea ever since, even up to today. And so far, he has not accounted for all the malefic results of his support for that regime and its root ideas. You are right prabhu, Rocana and his ilk need to account for their role in the support of the Satanic-padas -- before they can make any real progress, agreed. Rocana is mentioned in this article below: ys pd]