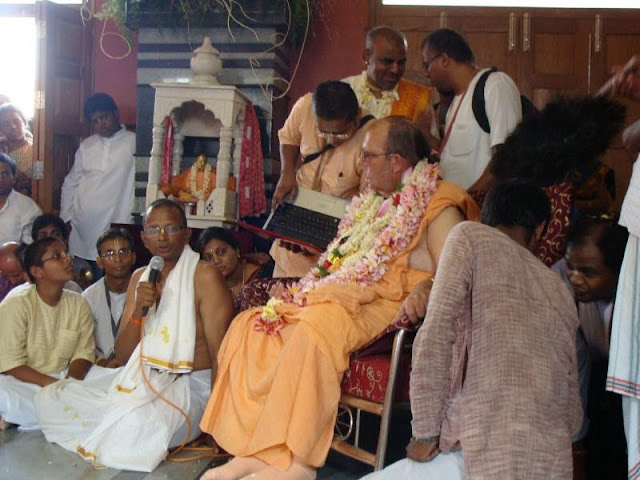 OK, and Jayapataka swami is a guru / Lord Krishna's messiah because:

* JPS is the post-1977 founder father of the homosexual pedophile guru's club that molested thousands of ISKCON's children.
* JPS thus caused ISKCON to be sued for $400,000,000 for mass molesting.
* According to ex-kulis like Jvalamukhi dasi, JPS's Mayapur program still harbors various molesters and the people who are covering up for them. She also suspects some sort of "Satanic rituals" might be going on there.
* JPS is the person most suspected to be saying "poison isvarya rasa" on the Srila Prabhupada poison complaint tapes.
* JPS supports the idea that acharyas fall down into illicit sex with men, women and children, and as such, he re-instated Bhavananda as "Vishnupada" when Bhavananda was caught engaged in homosexual affairs with Taxi drivers in the holy dham.
* JPS has wasted millions of dollars suing the Srila Prabhupada devotees in India.
* JPS was the person who was encouraging the other acharyas to get "ghost busted" by Chitesvara, because JPS thinks the acharyas are ghostly haunted.
* JPS was eating like a hog, while the children in his schools were being starved and fed old rotten moldy food, as such, he ballooned up to maybe 400lbs. and this caused him to have a stroke. Meanwhile, children were having stunted growth and falling out teeth from malnutrition.
* And in sum, Jayapataka supports the ( all along since 1977 and ) current bogus GBC guru's ideas, as spoken by Jayadvaita swami and others, that acharyas are often falling into illicit sex with men, women and children, and other debauchery, drugs and so on. Lord Krishna's successors are debauchees?

WHAT IS THE BIG MYSTERY HERE?

Well the main mystery for PADA is this, why are the people in Bangalore agreeing with people like Varada Krishna, that the Vedic Acharyas of India -- and from Vaikuntha -- are often falling and worse -- are often "engaged in illicit sex with men, women and children," so much so, they support this Varada Krishna person and his program?

Is not South India the home of the brahmana culture?

Why are they allowing and promoting this deviated program? Or did the folks there just allow back that bogus Swami Nithyananda, and allow him back in the vyasa seat? We are completely baffled here. If the seat of Vedic culture in India is in South India, and they allowing the promotion of this bogus acharyas lineage -- whose acharyas are often debauchees, if not homosexuals, or even child molesters, or the founder fathers and creators of that bogus lineage and process like JPS, what state is the Vedic Culture in over there? And why are our Prabhupadanuga people over there not using this as an argument against these folks, to have these fools run out of town?

At least they ran that bogus Nithyananda fellow out of town for awhile. Why can't we do that? Anyway, we could go on here forever about the glories of the Jayapataka criminal messiahs program, but here are a few hints of what is wrong with his Royal Holy Good As God Messiah-ship:
Jayapataka's cows slaughtered: http://www.prabhupadanugas.eu/?p=24131

Of course the list of troubles with this man's acharya program are endless, why is this going on over there?  ys pd