"By gradual process of cultivation of knowledge, of behavior, of rules and regulations, one becomes a dvijaḥ. Dvijaḥ means twice-born."

"It is a pious act simply to chant and hear all about the Lord. The Lord descends on this earth and acts like others in connection with the activities of the world just to create subject matters for hearing about Him; otherwise the Lord has nothing to do in this world, nor has He any obligation to do anything. He comes out of His own causeless mercy and acts as He desires, the Vedas and purāṇas are full of descriptions of His different activities so that people in general may naturally be eager to hear and read something about His activities." Srimad-Bhagavatam - SB 2.7.15

"The process of meditating on the form of the Supreme Personality of Godhead within oneself and the process of chanting the glories and pastimes of the Lord are the same. The only difference is that hearing and fixing the mind on the pastimes of the Lord is easier than visualizing the form of the Lord within one’s heartbecause as soon as one begins to think of the Lord, especially in this age, the mind becomes disturbed, and due to so much agitation, the process of seeing the Lord within the mind is interrupted. When there is sound vibrated praising the transcendental pastimes of the Lord, however, one is forced to hear. That hearing process enters into the mind, and the practice of yoga is automatically performed. For example, even a child can hear and derive the benefit of meditating on the pastimes of the Lord simply by listening to a reading from the Bhāgavatam that describes the Lord as He is going to the pasturing ground with His cows and friends. Hearing includes applying the mind. In this age of Kali-yuga, Lord Caitanya has recommended that one should always engage in chanting and hearing Bhagavad-gītā. The Lord also says that the mahātmās, or great souls, always engage in the process of chanting the glories of the Lord, and just by hearing, others derive the same benefit. Yoga necessitates meditation on the transcendental pastimes of the Lord, whether He is standing, moving, lying down, etc."  Srimad-Bhagavatam - SB 3.28.19

"This is the way of the paramparā system. If we follow the ācāryas, we attain the same benefit as our predecessors. If one follows the decisions of Arjuna, he should be considered to be directly hearing Bhagavad-gītā from the Supreme Personality of Godhead. There is no difference between hearing Bhagavad-gītā directly from the Supreme Lord and following a personality like Arjuna, who formerly heard Bhagavad-gītā directly from the Lord. Sometimes foolish people argue that since Kṛṣṇa is not present at the moment, one cannot take direct instructions from Him. Such foolish people do not know that there is no difference between directly hearing Bhagavad-gītā and reading it, as long as one accepts Bhagavad-gītā as it is, spoken by the Lord. However, if one wants to understandBhagavad-gītā by his imperfect interpretations, one cannot possibly understand the mysteries of Bhagavad-gītā, even though one may be a great scholar according to mundane estimation."  Srimad-Bhagavatam - SB 4.30.10 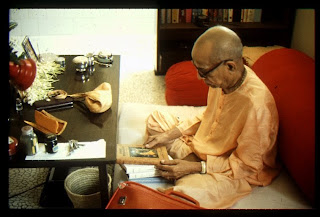 "Sruti means Vedic literature, which is traditionally, from time immemorial, it is learned simply by hearing from authoritative sources. Just like in the Śrīmad-Bhāgavatam in the First Canto, first verse, it is said, tenebrahma hṛdā ādi-kavaye. The original authority of Vedic literature, Lord Brahma. He was instructed about Vedic knowledge by Lord Kṛṣṇa. And he imparted Vedic knowledge to the world. So he was the first creature, living creature, after creation. So there was nobody to give him initiation because he is the only living creature at that time. So the Lord Himself initiated. How He initiated? Hṛdā, through the heart. Because He is situated in everyone's heart. Īśvaraḥ sarva-bhūtānāṁ hṛd-deśe 'rjuna tiṣṭhati [Bg. 18.61]. He is, the Lord is seated in everyone's heart. So he initiated. Tene brahma hṛdā. Hṛdā means "through the heart." And that is also confirmed in the Bhagavad-gītā, that buddhi-yogaṁ dadāmi tam, "I give instruction, buddhi-yogam, the yoga principle of intelligence or bhakti-yoga." Whom? Teṣāṁ satata-yuktānāṁ bhajatāṁ prīti-pūrvakam [Bg. 10.10]. One who is engaged with love and affection in devotional service, to him He gives instruction. Not to all. Samo 'haṁ sarva-bhūteṣu [Bg. 9.29]. God is equal to everyone."

"although God is equal to everyone, he's especially inclined to the devotees. Ye tu bhajanti māṁ prītyā teṣu te mayi. Those who are engaged in devotional service, He's specially inclined to him. And to him He gives instruction from within. Teṣāṁ satata yuktānām [Bg. 10.10].

Satata means always. Twenty-four hours, one who is engaged in Kṛṣṇa consciousness, to him He gives instruction from within because he's qualified. Others, instruction He's giving, but other is not obeying the instruction. Just like a man is ready to commit some sinful activities. He thinks, "Shall I do it?" From within, "No, no. Don't do it." Again he says, "Why not? Let me do it." In this way, when he insists, oh, then He says, "All right, do it. Do it." So the word that "Nothing can happen without the sanction of God," that is a fact. Nobody can act anything... Then the question is why a man acts sinfully? Why...? Does God give sanction for sinful action? Yes. When one insists that "I shall do it." "All right, do it. And suffer the consequences." " 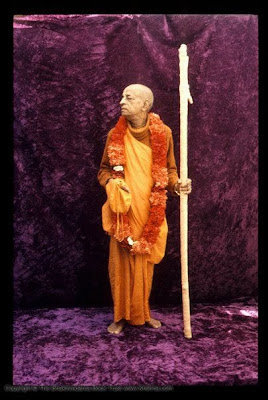 "So this purification process, according to Vaiṣṇava smṛti.... In the beginning one has to accept a spiritual master, bona fide spiritual master. And who is bona fide spiritual master? That is also described in several Vedic scriptures. In the Upaniṣad it is said, śrotriyaṁbrahma-niṣṭham [MU 1.2.12]. One who has come down in disciplic succession and as a result of such authorized succession one has become fully, firmly convinced in Brahman. Brahman, Paramātmā, Bhagavān, the same thing.Brahma-niṣṭham. He is transcendentally situated."

"...who is spiritual master? That is also stated. Śābde pare caniṣṇātam. Śābde means the Vedic śruti, śruti. This is calledśābda-brahma. One who has learned both śruti and smṛti. Śrutimeans Vedas, and smṛti means books derived from Vedic knowledge. That is called smṛti. And Śrī Rūpa Gosvāmī says in his Bhakti-rasāmṛta-sindhu, śrutismṛti..

If one poses himself a great devotee, but does not follow the principles of śruti, smṛti, purāṇa, and Nārada-pañcarātra, and the rules and regulation thereof, then his presentation as great devotee is simply disturbance. According to this Hari-bhakti-vilāsa and according to the direction of the Gosvāmīs in the Lord Caitanya's line, if one does not follow the principles of Vedas, principles of the smṛti or corollaries, Vedic literature... Just like Bhagavad-gītā is called smṛti and Śrīmad-Bhāgavatam, Mahā-purāṇa. So śruti, smṛti, purāṇādi [Brs. 1.2.101], and pāñcarātriki-vidhim, Nārada-pañcarātra. Without following the rules and regulation of these scriptures, if one poses himself as devotee of Kṛṣṇa, aikāntikī harer bhaktiḥ-harer means Lord, bhakti, devotional service—he is a disturbance to the society." 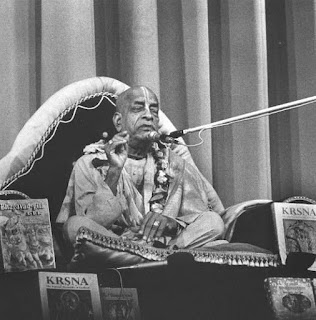 "By gradual process of cultivation of knowledge, of behavior, of rules and regulations, one becomes a dvijaḥ. Dvijaḥ means twice-born. The first birth is by the father and mother, and the second birth is by the spiritual master and Vedic knowledge. At that time, the second birth means mother is the Vedic knowledge and father is the spiritual master. So Sanātana Gosvāmī says, because he has enunciated this rule for the so-called rigid brāhmaṇas, they say, "Without taking birth in a brāhmaṇa family there is no possibility of one's becoming a brāhmaṇa." But Bhagavad-gītā does not say like that.Bhagavad-gītā says, cātur-varṇyaṁ mayā sṛṣṭaṁ guṇa-karma-vibhāgaśaḥ [Bg. 4.13]. "These four principles of caste—brāhmaṇa, kṣatriya, vaiśya, śūdra—I have created that division." Now it is creation of God. Nobody can nullify it.

So that division is everywhere. Not only in the India or Hindu society or... No. Everywhere. Guṇa-karma-vibhāgaśaḥ, by classification of quality and work. Here also the same thing is there. And Śrīmad-Bhāgavata also confirms this by Nārada Muni, when he describes about these four principles of social division, he says, yasya hi yallakṣaṇaṁ syād varṇābhivyañjakam. Now there is classification who is a brāhmaṇa, who is a kṣatriya, who is a vaiśya, the qualities. Because according to quality, the divisions shall be there. Now in the Bhagavad-gītā you'll find the brāhmaṇa's quality, the vaiśya's quality, the śūdra's quality. So Bhāgavata also confirms that yasya hi yallakṣaṇaṁ syāt. The symptoms of a person qualifying himself to become a brāhmaṇa or kṣatriya or vaiśya or śūdra, that is the main principle. If that symptom is found elsewhere, he should be accepted in that classification. 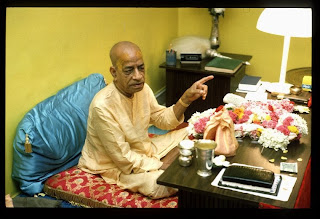 Suppose a man is born in a śūdra family or less than a śūdra family, but if his qualities are just like brāhmaṇa, then he should be accepted as brāhmaṇa. That is Bhāgavata's...

So this process of Kṛṣṇa consciousness is a manufacturing process of brāhmaṇa, Vaiṣṇava. Vaiṣṇava means surpassing the brahminical stage. Brahma jānātīti brāhmaṇaḥ. One who has realized Brahman, he is called brāhmaṇa. After realization of Brahman, then realization of Paramātmā, then realization of Bhagavān. And one who comes to the stage of understanding Bhagavān, the Personality of Godhead, Viṣṇu, he is called Vaiṣṇava. A Vaiṣṇava means he is already a brāhmaṇa. Because in the Bhagavad-gītā it is said,

"The devotional service begins when one has already realized Brahman. Because to whom rendering devotional service? To the Supreme Personality of Godhead, Bhagavān. And Bhagavān is the last word in the Absolute Truth."

"The Absolute Truth is realized in three phases. First impersonal Brahman realization, the localized Paramātmā realization, and then the last word is to realize the Supreme Personality of Godhead. And that is also confirmed in the Bhagavad-gītā."

"One who has accepted that Vāsudeva, the Supreme Personality of Godhead Kṛṣṇa... Kṛṣṇa is Vāsudeva. So mahātmā, he is the greatest soul. And Bhāgavata confirms,"

"If one is engaged in the transcendental loving service to Vāsudeva, then automatically the stage of Brahman realization automatically becomes revealed." 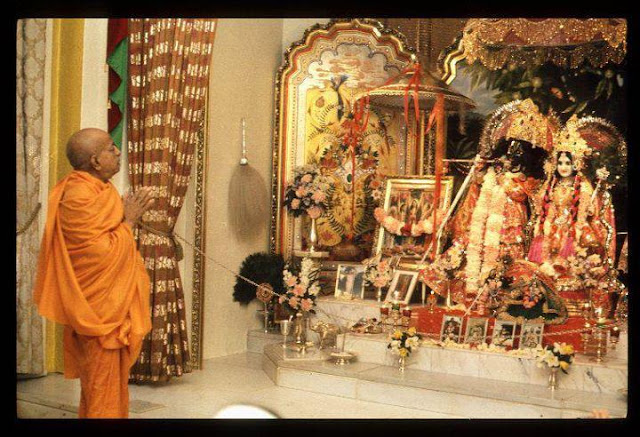 http://prabhupadabooks.com/classes/initiations/brahmana_initiation_lecture_with_professor_oconnell/boston/may/06/1968
Posted 7 hours ago by Vidya Vani
Posted by krishna1008 at 4:22 PM