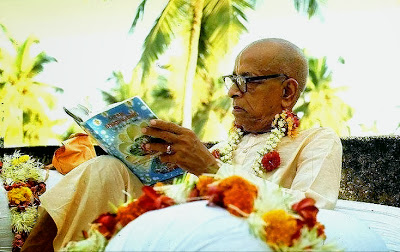 To PADA: SRILA PRABHUPADA's original books, the ones he made, he offered to Krishna, he delighted in, he encouraged to be distributed, and he read with us every day---- are now banned from ISKCON PROPERTY, at least in Alachua -- if not world-wide.

Dravinaksha das has a truckload of Srila Prabhupada's books and is looking for a place to park his truck as he and his wife were informed that the truck carrying these treasured books is NOT ALLOWED ON ISKCON's PROPERTY. Anyone who has any sympathy or delusions about "honorable intent of ISKCON devotees" is also on the royal road to hell with the people who made this demoniac edict.

Thanks Krishna Kirtan prabhu for this link:

Get the Original Gita here:

COMMENT #1 What is wrong with these idiots in Alachua? The "retired Srila Prabhupada's disciple club" lets Jayadvaita strut around there like the king of the world, changing books while saying gurus are sex mongers. And they pat him on the back and do not even make a protest at the temple? No wonder we have these problems, the followers do not even care if their guru is being kicked out of his own temple.

Sounds like the demons are winning, for now anyway... Jaya Gaurasundara dasa