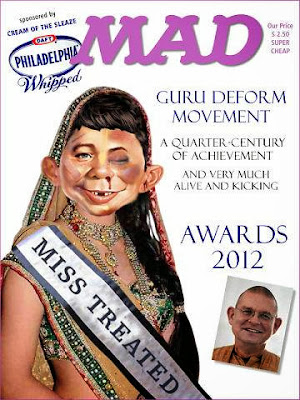 The home of the American revolution is up in arms again. This time the congregation of ISKCON Philadelphia is demanding the removal of Ravindra Svarupa dasa from all administrative positions. They have tired of his lack of leadership, in which he does nothing except collect donations from the people. The congregation is scheduled to meet with Ravindra Svarupa and ISKCON Resolve next month, with ISKCON Resolve suggesting that the Philadelphia congregation be saddled with providing a pension of $1,000 to $2,000 a month for service rendered.

[PADA: The secretary of Mukunda Goswami told PADA that the "ISKCON World Review" was getting letters all through the 1980s from the rank and file devotees -- complaining about all kinds of problems: Bad actors in ISKCON's "guru" positions; Leaders who were destroying marriages; Bogus people in charge of the children; Criminal activity; Abuses of women and children, and so on. Yet Mukunda Goswami told the secretary he could not act on any of these complaints because "this is my career."

Mukunda Goswami really could not help the people making all these complaints -- because this would jeopardize his career as a GBC guru defender, apologist and henchman. And so the abuses went on and on without being checked, because these leaders have been more concerned about their careers, retirement plans and so on, than ISKCON. And Trivrikrama swami made a similar statement to one of our associates.

And now Ravindra will only leave if he gets a "$1,000 -$2,000 a month retirement package." He kicked almost everyone out of there, supported Kirtanananda and fools like Satsvarupa as gurus, ruined Gita Nagari, made these places into ghost towns, and caused all kinds of mayhem generally for thousands of people, and we have to pay him for wrecking these places?]

*** Let it be said that a representative from Resolve is known to be a close friend of Ravindra Svarupa's and he is the one pushing for the pension. Is this a joke or is this just another example of the good old boys looking out for each other?

[PADA: ISKCON resolve is another version of Mukunda Goswami, pushing Ravindra's ill deeds under the carpet and asking for huge sums of money for these leaders.]
As for the present Temple situation, the community has refused any financial support until Ravindra Svarupa has been removed, with many of the people demanding that he no longer even be on the property. ….

[PADA: Good, cut them off at the root by de-funding them. Good idea. Long overdue. And just start another temple in another building, just move on! We have done that here in the Bay Area, we have an independent Prabhupadanuga temple that is doing super good, we just rented our own place and started fresh. That can be done anywhere else!]

*** Now with the [temple's] coffers empty, will Ravindra Svarupa use his own money to pay the bills? Make no mistake, he has hundreds of thousands of dollars put away. Or will he run up the line of credit against the temple property? My feeling is he will do the latter, putting the next administration in a dire situation of debt. He will of course say it was not his fault, as nothing that as happened in Philadelphia in the last 30 years has ever been his fault.

The question is, how long will the GBC stand by while a Temple community falls apart due to the ego of one person? When will they step in, removing the impediment to the advancement of the entire congregation, who is one of their own? This community needs help. How many times does ISKCON Resolve need to be called before they see a pattern? …. It is time for them to step in and help a community of sincere devotees, putting aside their usual one-side approach of protecting their own. Please come to the aid of the Philadelphia community. It is up to you.

[PADA: Our experience is that they will let the ISKCON property be destroyed to save their good ol boys program. Cut your losses, rent your own building and start fresh. ys pd]
Posted by krishna1008 at 6:31 PM