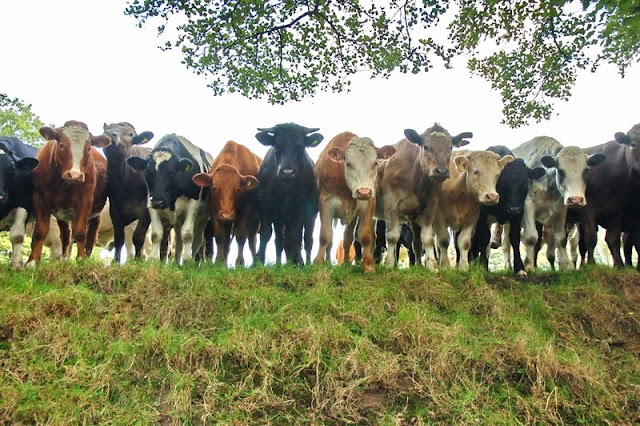 I have read the recent article about ISKCON India Advisory Council, IIAC, concerning the Ahimsa Foundation for Cattle Protection, AFFCAP. Personally I would not have used the terminology "Cattle", but rather the terminology "Cow". "Cattle" infers the modern day farming of cows for food by slaughtering them for beef, whereas "Cow" refers plainly to the bovine animal. That's a fairly sensitive point which ISKCON devotees should be more aware.

However aside from that important "technical" point, this article, by way of inference, highlights the monumentally flawed perception and practise in ISKCON of Cow Protection, and why Cow Protection does not work in ISKCON.

[PADA: Nothing works correctly in ISKCON? The bogus GBC's first priority since 1977 has been -- to purge 95 percent of Srila Prabhupada's disciples. And his disciples were the senior "church elders" who were doing most of the bhakta trainng, deity pooja, book distribution, harinama samkirtana, preaching, cow protection and overall managing of the society. It was a purge of both the workers and the intellectuals. Stalin, Pol Pot and similar dictators, they first of all remove the intellectuals from posts of authority in the society, and then the society crumbles. If we remove almost the manpower from a cruise ship, then the ship's functions will deteriorate, the motor will stop running when we toss out the mechanics, and the ship will be in danger of crashing into the rocks etc.]

*** The article goes on to describe one of the problems that ISKCON faces by sending cows off to some unknown destination for who knows what.

[PADA: Right, after the GBC purged out most of the financial supporters of the cow programs, and purged out most the cowherd devotees who were caring for the cows, then the cows ended up suffering very badly from negligence. In at least in one instance an ISKCON farm devotee sold the remaining cows to a slaughterhouse, to intentionally have them killed -- to end their suffering from neglect.

In other words, he wanted to perform a sort of "mercy killing" on these cows, since they were being tortured from not getting proper treatment due to neglect in the GBC's guru program. Many of us can see how a desperate person, even if he loved these cows, would do this to save them from further suffering.]

*** And we have traced that ISKCON cows have been slaughtered in the past and abuses occur.

[PADA: Its pretty simple, just do the math: if the GBC's gurus kick out most of the people who are serving and caring for the cows, then the cows will end up in a helpless, hopeless and "suffering from neglect" state. That was and is their plan all along, to purge out the mass of Krishna devotees, and to have maybe a few hired Bengali poojaris to tend the deity, and then have some Hindus come on Sunday to make donations. Srila Prabhupada's plan for varnasrama, farms, cows, etc. was not wanted by these leaders. So yes, these cows ended up being a burden, and so the GBC guru's main plan has been to drain down the cow population and -- end the program.]

*** There have been some significant articles by devotees that have clearly illustrated the huge problems in ISKCON of cow non-protection. And massive cow abuse in ISKCON farms that I don't need to write about here.

[PADA: Right, Srila Prabhupada says that the demons attack and mistreat the brahmanas, the women, the children and the cows, and that is what happened to ISKCON, it was attacked by demons.]

[PADA: Exactly, kicking out almost all the devotees has made the book distribution go down to a trickle -- from what it was previously, the harinama samkirtana program has all but disappeared, the deity programs have suffered badly, and some temples are barely scraping by --and in bad repair -- and so on, because the priority now is to fund super opulent lifestyles for a few elite "gurus" -- and not to support an overall society, including cows. That is not what the current leaders want.]

*** I have travelled throughout ISKCON, Europe, and to some ISKCON India Cow Protection projects and in all honesty and without prejudice, the whole project is misconceived and misunderstood wholesale. So because it costs a lot of money to support cows, then alternative ideas are put forward to get rid of the cows.

[PADA: This is common sense, if you get rid the people who are caring for the cows, then naturally the next step is to get rid of the cows. That IS the plan!]

*** But that's because the human side of Cow Protection has not been put into place correctly. What happens in ISKCON is that the lifestyle of official ISKCON devotees that manage Cow Protection projects does not match up to the mode of goodness and still operates in a very capitalistic way. Obviously these two opposing lifestyles do not match up and so the cows are "perceived" to be surplus to their requirements and cost a lot of money, so they are disposed of.

[PADA: Again, if you dispose of all the people caring for the cows, then naturally the cows will eventually have to be "disposed of" because there will be no support system to care for them.]

[PADA: Right, the GBC establishes countless "paper pushing" committees to manage things like the gurukula schools, cow protection, women's protection, and so on, but they are just that, "pushing papers" and not having any real effect on the society overall. Of course then again, making a committee to protect cows, from the same people who orchestrate a policy to ban, beat and kill the members of the society who are helping the cow program, is never going to work. This would be like putting Charles Manson, The Boston Strangler, and the mass murderers on San Quentin's death row, to be in charge of the Girl Scout's summer camping out program. The same people who are now ruining the cow program, are not going to fix the cow program.]

*** Just about everything that is set-up to provide for Cow Protection by ISKCON devotees has been wrong for many years now. ISKCON provides ridiculously expensive cowsheds but can't even execute animal husbandry properly to keep them from being overweight fat cows. Then treating them as tourist supports by making them provide the draught power for rides in a trailer just to make money compromises the cow's mode of goodness. The cow's products of milk is then sold as a marketable product as if it were a capitalistic venture and if that was not bad enough, then a total misconception that this protected milk some how magically becomes "ahimsa" milk is marketed to help sell the product. So the devotees become market strategists in the capitalistic world to sell mode of goodness milk. The whole environment is bizarre and absolutely the antithesis of what Cow Protection is all about, and guess what -- that all happens at what they call the flagship example of ISKCON Europe. It's just another cheapscape, and a total abuse of cows.

[PADA: This is good. Yep, the result of Dusyanta's, Rocana's and ilk's "living gurus" is -- that cows have to suffer, and be sent to the slaughter house. Could not agree more. Of course this begs the question, why are these folks like Dusyanta supporting the program that is mistreating cows so badly, by saying the leaders of the cow abuse program are "liviing gurus"?]

*** And that is all down to Srila Prabhupada's teachings and Lord Krishna. DD

Yogeśvara: So then we should begin our rural communities like New Vrindaban, and then by training up people in the cities, we can send them gradually…
Prabhupāda: There will be no city. We don’t want cities.
Bhagavān: What about our city temples?
Prabhupāda: No, no. For the time it may go on. But as we make progress, there will be no necessity. City means… For the present we have got. Because the city is there, we are there. But suppose the city is closed. We shall be there? If the city is closed, you still will be there?
Yogeśvara: But we can predict that the cities will go on for quite some time. Prabhupāda: Yes, it will go on, but when they will see that your ideal community is better than city life, people will take to it. Param dṛṣṭvā nivartate. [From Bg 2.59: “…Ceasing such engagements by experiencing a higher taste, he is fixed in consciousness.”] When one gets a better standard of life, naturally he will give up the lower standard of life.
Dhanañjaya: But won’t the countryside be spoiled if there is an atomic war? Prabhupāda: Yes. The what is called…?
Dhanañjaya: Radioactivity.
Prabhupāda: By atomic bomb… What is that?…It says in your country, that you divide the city. I just forget.
Yogeśvara: The result of the bomb?
Prabhupāda: Bomb will be utilized where there are big materialistic persons. Bombs are never thrown in the village.
Bhagavān: The bombs will be thrown in the big cities where the industry is. Prabhupāda: Yes, yes.
Yogeśvara: The targets will be the cities.
Prabhupāda: Yes. They will be finished first. The bombs are never used at the villages. Downtown, downtown. (laughter) The downtown will be first finished. I have got experience during the last war. The bombs were being thrown in Calcutta, and almost all the bombs were thrown in downtown. [Morning Walk: Rome May 28 1974]