Pancali Dasi And The Story of the Vulture

PANCALI DEVI DASI ACBS: In 48 hours from now I am closing down my facebook profile. I thankyou all for your association here & via this I have learned so much. Please forgive me if I have caused offences knowingly or unknowingly & please bless me and my family on this wonderful path of bhakti. Ys Pancali dd

[PADA: Thanks Pancali. You idea of "preaching" is not the problem, its "what" you are preaching that is the problem. Your current idea is apparently, anyone who objects to mass children molesting, and pure devotees being poisoned, should be banned. You keep telling everyone on earth, ban PADA, yes we need to be banned, we have hundreds of witnesses at least that you want that all along here.

You folks STILL say that we need to be banned, ok just like many GBC gurus said since 1978, and there is only one real good reason for you and your GBC friends to be always banning us, because we are number one at protesting children being abused, beaten, molested and killed from medical neglect and suicides. You say we need to be banned, so no one will advocate for children? No one should defend children? Just let them "get their karma"? Really? What kind of preaching is that? That is what the GBC "preaches"! That is not preaching, that is aiding, abetting and allowing mass abuse to go on without any check and balances.

Everyone knows we protested that issue since the early 1980s, and you all know that we dissenters are being beaten and killed for protesting this child abuse process, and you want to join the people who want to ban those of us who protest children being molested? And they want to kill us, and you are now on that side of the agenda as well?

If you folks want this religion to continue, you had better change your attitude and fast, to glorifying anyone who defends children from abuse, whether that is us, your local bar tender, Joe the Garbageman, or anyone else who defends children, they should be given a medal of honor by you people, not banned and removed? Banning and removing, great, and what did that accomplish? The abuse got worse.

You people's ilk are the reason for ALL the abuse happening in the first place, as soon as I pointed it out, you said -- remove and ban the protest, and look at the results of your "preaching"? Banning the people who protest children being molested is WHY IT HAPPENS!

And your husband is currently working with people who want to send my details to the GBC goondas, to get us dissenting people killed? We are saying children should not be abused, and you folks are apparently saying, lets get the protesters killed? That is not preaching my dear! That is what New Vrndavana folks were preaching, and you are now their biggest parrot?

Anyway, I sincerely wish you folks well, and hope you folks will wake up someday and realize, protesting children being abused and molested is YOUR DUTY AS A HUMAN BEING. You do not need to be a great devotee to do that, all you have to do is join with us humans. Children being abused and molested has to be stopped, has to be protested, and your banning attitude against us CAUSED MORE MOLESTING. Wake up!

And now it seems you folks are not even happy banning the protesters to mass child abuse, you de facto want to get us killed? Again, that is what some of the GBC has done to us? We also were the first people to oppose the poisoning of Srila Prabhupada. I risked my life to bring out that tape, so lets ban the people who oppose pure devotees being poisoned? That makes you a de facto protector and servant of Pontius Pilate, lets help the people who killed pure devotees, and ban the people who protest Pontius Pilate?

Please wake up my dear, this is not a good path for anyone. You need to re-examine what you are "preaching." I said, the pure devotee was killed, and you want to see me banned and maybe also killed? Are you a GBC guru clone or what? By your behavior, yes, you want exactly what they want. Pontius Pilate and the people who killed Jesus, they will be worshiped and there will be no protest? Ban the people who are exposing the killers of pure devotees? You want what the GBC wanted all along. Unfortunately, that binds you to the karma of assisting the people who kill pure devotees, since you want to ban those who protest.

No wonder you are feeling a little dubious, you are on the wrong path. Srila Prabhupada says anyone who thinks of hurting a vaishnava has to go to hell, for even thinking of that. We were all walking along one day in India in 1972 and we saw a big vulture glaring at us from a roof top, and we all laughed and pointed that out. Srila Prabhupada also started laughing and he said, "This is what happens, you cannot even think bad thoughts towards a devotee, its not allowed. Anyone who even glares at a devotee, in his next birth he will be a vulture. Then he can sit and glare all day long, for his offense of glaring at a vaishnava."

You guys are way worse, you don't want to merely glare at vaishnavas, you apparently want them to die. I am your well wisher although you  may not believe it. Here is what your husband Srila Prabhupada siddhanta says below. You guys are really wrong to be thinking that getting anyone killed is right, we are not even supposed to kill an ant. Our land lord  over here goes crazy because I am always removing any stray spiders in a glass cup, and any other bugs from the house like a huge bee I took off the window, and taking them out into the grass to let them go.

She thinks I am a nut case for not spraying them to death. Nope, we are not supposed to want to see anyone die, nor even an ant. Think about it. Anyway, if you wanted to help victims you should join with the people who are addressing the crimes, rather than getting rid of the people who are addressing the crimes, your idea simply aids and abets more crimes, and has done so since 1978. ys pd 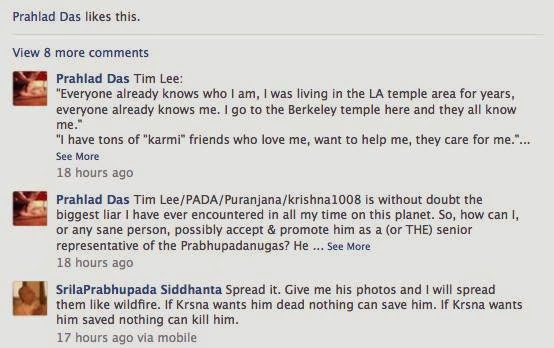