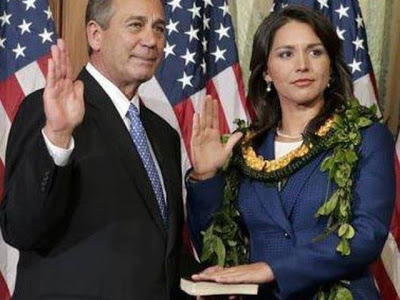 Washington, D.C. (January 3, 2012) -- The Hindu American Foundation (HAF) welcomed the inauguration of Congresswoman Tulsi Gabbard (D-HI), the first Hindu elected to the U.S. House of Representatives. Gabbard took her oath on the Bhagavad Gita, a sacred Hindu text, as she joined the 113th Congressional class. Gabbard said the copy she chose for her swearing in ceremony was one which she read nearly every day while serving as an officer in the Hawaii National Guard during the Iraq War as well as during her tenure as a State Representative and Honolulu City Councilwoman.

"I chose to take the oath of office with my personal copy of the Bhagavad-Gita because its teachings have inspired me to strive to be a servant-leader, dedicating my life in the service of others and to my country," said Congresswoman Gabbard. "My Gita has been a tremendous source of inner peace and strength through many tough challenges in life, including being in the midst of death and turmoil while serving our country in the Middle East."

Although Hinduism has many sacred texts, the Bhagavad Gita is amongst its most well-known and widely read. Framed as a dialog between Lord Krishna, an incarnation of God, and the warrior prince Arjuna, the Gita is a 700 verse treatise on the nature of both the Divine and man, selfless service, and duty. Over the course of 18 chapters, Lord Krishna expounds the concepts of dharma (righteousness), moksha (liberation), and the four yogas, or paths to spiritual life and liberation, including karma yoga (righteous action), jnana yoga (knowledge), raja yoga (meditation and austerity), and bhakti yoga (loving devotion to God). The Bhagavad Gita is part of a larger Sanskrit epic, the Mahabharata, which at over 100,000 slokas, or verses, is about ten times the length of the Iliad and Odyssey combined, according to some counts.

"The Foundation congratulates Congresswoman Tulsi Gabbard, and we send our best wishes for her tenure in Congress," said Suhag Shukla, Esq., HAF's Executive Director and Legal Counsel. "As she serves her constituents from Hawaii, we also look forward to her giving voice to the concerns of her fellow Hindu Americans and bringing her uniquely pluralistic worldview to American policymaking and governance."

Since its inception in 2003, HAF has engaged Congressional leaders with its annual advocacy days and briefings highlighting human rights concerns of Hindus globally, as well as domestic issues of importance to the Hindu American community. In prior Congressional sessions, HAF advocated for a range of issues including healthier school meals, workplace religious freedom, broader awareness of hate crimes and hate speech targeting Hindu Americans, and human rights concerns of Hindus globally. Most recently, HAF, along with Congressman Brad Sherman (D-CA), spearheaded a Congressional letter to Secretary of State Hillary Clinton, urging her to address the severe and ongoing human rights violations taking place against Pakistan's religious minorities.

"It's exciting that this session we will have the opportunity to work with the first and only Hindu in Congress," said Jay Kansara, HAF Associate Director of Government Affairs. "We are confident that Congresswoman Gabbard will join many of her colleagues in prioritizing the curbing of human rights violations against minority Hindu communities globally as well as rigorously upholding religious liberty and promoting religious pluralism right here at home."