Aindra feared "being burned at the stake" (Aindra pt.1) 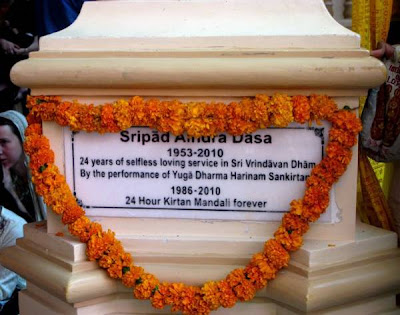 AINDRA DASA: I only regret that, in a devotional society meant to instill fearlessness and individual thoughtfulness in its members, the atmospheric conditions are such that devotees opt to remain anonymous so as to circumvent the risk of being barbarously burned at the stake by the institutional powers that-be (the GBC gurus) for exercising their God-given right to freedom of pure devotional expression. Anyway, Krishna knows who they are, and I pray for His unreserved blessings upon them.

AINDRA DASA: Several years ago, upon completing a major part of this treatise, I decided that I had better shelve the thing, despite my deep conviction about the need for this dimension of open and frank dissertation in contemporary Vaishnava society. I was thinking that perhaps the best place for it would be in a granthasamadhi (to be published after my death). After all, Srila Prabhupada had requested me to write a book. He didn’t say anything about taking it to the press. I thought it better to safeguard the peaceful prosecution of my bhajana by avoiding the likelihood of provoking certain anticipated institutional and interpersonal hostilities toward myself.

[PADA: Aindra frankly expresses that he is afraid to publish his book because it might "provoke certain institutional hostilities."

That means he is afraid that most likely there will be a hostile reaction by the "GBC GURU" leaders of the ISKCON institution against him for publishing his book.

Thus, at the very start of his book, he is saying he is worried that his bhajana will be disturbed if he speaks out against these ISKCON leaders, and that they will attack him in a hostile manner.

We are told that Aindra was crying to some of his associates that the GBC gurus wanted to "kick him out of his room." Well yes, that is how these bogus GBC GURUS treat those of us who disagree, "dissenters" are banned -- at the very least.

Aindra wanted to "safeguard" his service to Krishna, namely bhajana, by not speaking up about the issues surrounding these ISKCON leaders, but he finally decided to go ahead and release his book, despite being warned by these leaders not to publish his book or face some sort of punishment.

Aindra says in sum, that speaking the truth in ISKCON these days is a dangerous task since there will very likely be a hostile reaction by the leaders of ISKCON, and "hostile" of course could mean all kinds of things in the current ISKCON situation, but it may include: contrived excommunications, physical assaults, and possibly -- assassination. "Hostile acts" in the media often means, use of guns, shooting missiles, and in sum -- warfare and dead people. Therefore "hostile" is a very strong word for Aindra to use, to describe the potential actions and reactions of these leaders.]

AINDRA DASA: Perhaps after I’m dead and gone someone would unearth the manuscript and publish it as an assortment of novel Aindra-isms to be circulated among the curious. Otherwise, instead of shelving it, another idea was to author it incognito under a pen name.

[PADA: Aindra is afraid to have his name attached to his book because of the potential for hostile reactions from the GBC gurus. He is htinking he may have to publish as an incognito author, out of fear of GBC guru reprisals.]

AINDRA DASA: Subsequently, however, in a dream, I asked Srila Prabhupada whether he had any occasion to go through my book to which he replied, "We will see it when it is published."

[PADA: Srila Prabhupada personally encouraged Aindra to openly challenge these bogus GBC gurus, as he does in his book.]

AINDRA DASA: This indicated to me his intention that the book should not only be written but published as well. I consider it Krishna’s kind arrangement that a number of sober-minded, pure-hearted Vaishnavas and Vaishnavis came forward to selflessly assist me in the endeavor to produce this work. I am ever grateful to these individuals who sacrificed so much of their time and energy to help me. I only regret that, in a devotional society meant to instill fearlessness and individual thoughtfulness in its members, the atmospheric conditions are such that devotees opt to remain anonymous so as to circumvent the risk of being barbarously burned at the stake by the institutional powers that-be for exercising their God-given right to freedom of pure devotional expression. Anyway, Krishna knows who they are, and I pray for His unreserved blessings upon them.

[PADA: Yes, ISKCON is supposed to instill fearlessness, and instead it is making people fearful of the GBC GURU MAFIA. Even Aindra is fearfull of their possibly BURNING HIM AT THE STAKE. Very ironically, he was burnt to death by a so-called gas bottle stove accident. Of course in India gas bottle stove explosions are the number one method of killing unwanted brides, this is called the "burning bride syndrome." Brides are sleeping, and then a gas bottle stove is set alight to kill them. Was Aindra predicting his own death by burning when he was saying he would be, burned at the stake (by the malefic GBC guru sabha)? We are going to review some of Aindra's statements in the next parts of this series, to see why he would be a target for these bogus gurus. ys pd]