PADA: My question is, if he insisted on living in a vehicle, ... since large (10-12 foot deck) passenger window vans in pretty good running order are sold for maybe $2,500 around here, why didn't the temple just buy him a legal and movable vehicle, a long time ago? He would not have been conspicuous because he could move it, and it would have been legal. Better yet, why not give him a room somewhere on the compound? ys pd

The devotees in LA didn't know what happened to Subuddhi for a few days after he was missing. They called the police to enquire and they said they had him and he was dead! They say Subudhhi threatened them and they shot him in self defense. I find it hard to believe that they really needed to shoot Subuddhi who never showed a temper in all the many years I knew him. This is a travesty of justice! So it's not like Subuddhi Prabhu intentionally commited suicide; he maybe acted in a way that made him get shot. Why can't they use a stun gun or something non lethal?! I smell a rat! Subuddhi didn't deserve that. Krsna must have taken him back after all. I still hope the police are held accountable. Sometimes they are too trigger happy and sometimes they get away with murder!
============================== 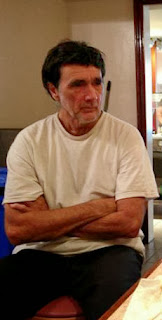 PADA: This devotee was being harassed by the police for unpaid fines on his truck, a truck that was supposedly given to him by Vishnujana a long time ago. So he went to the police station and raised a gun at officers, so they shot and killed him. This is another example of how there are many senior devotees who are getting older, getting sick and etc. and they have no shelter, so they are resorting to desperation alternatives. This poor devotee apparently could not even afford to pay the fines on his vehicle, much less take care of himself in other ways.

Personally, we cannot blame them much for this type of thing, they are being shut out of their own religion. Its sort of like how the medieval Catholic church would have a person "shunned," so the person could not have any dealings with the society, thus he could not buy, sell, trade, talk to others, get married, and so on, so the "shunned" often just died shortly thereafter.

Of course, we have also heard of some younger aged ex-kulis who are pretty much destitute and living in vehicles and so on. Meanwhile, the GBC gurus are living like jet-set Saudi Princes with opulent lifestyles. This is all very nice except, when someone steals from the populace to live like a King, and one is not authorized to be the King, one has to pay it all back with interest compounding daily, and one will be working off the debt being paid one penny a day in Yama's coal mines.

The people who make devotees suffer, cry, and die, will have to pay for all that, with interest compounding daily. Sorry, that is why these false gurus go to the lowest regions. And so do their supporters like Bhakta das and his GBC guru groupies, who are also in league with those responsible for the suffering they are causing others. So we should all pray for Subuddhi das that he will be given a nice situation to continue with his service to Srila Prabhupada and Krishna. ys pd 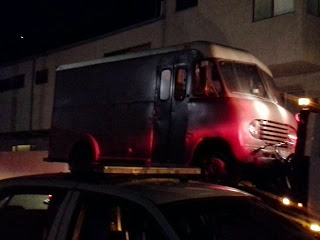 Subuddhi's Truck Being Towed Away
Posted by krishna1008 at 6:55 AM