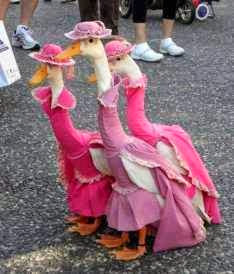 
[PADA: Right if you are a man, who is inclined towards illicit sex, drugs, rock and roll music and other forms of tomfoolery, when you enter the GBC's guru sabha, the overall GBC managers fall off their seats, bow down and kiss your lotus like Nike-clad feet, thinking you are a messiah from on high. They not only wash your feet, they think you are the sum total of the demigods and the living spokesman for God.

If you are a woman however, the GBC guru sabha goes out of their way to disqualify you from even speaking. Sulochana used to call them the "anti - woman and pro - homosexual" program. Anyway, the good news is some women kicked the rear ends of some of these bogus GBC swamis here, and its about time. ys pd]

Please accept my most humble obeisances. All glories to Srila Prabhupada!

I am grievously embarrassed by this article. Even if you have to maintain these incredibly obnoxious attitudes toward women in order to maintain your tapas of celibacy, still it is shocking that you would speak in this manner publicly, and in a written and/or spoken forum!

Srila Prabhupada would NEVER have approved of such arrogance and verbal brutality; you could easily have said the very same thing in a kinder, more gentlemanly way. And thus not alienated an entire half of the human race--i.e. women.

I think you owe this lady, whoever she is, an apology.

I do not know who is your guru, but you are definitely NOT following the same Guru that I am following, i.e. Srila Prabhupada.

Because of such kind of malicious and brutal behavior, many women will have nothing to do with today’s Iskcon. Devotee women even steer their daughters elsewhere.

Do you truly believe this is what Srila Prabhupada wanted? No. He told such men to go to the forest if they suffered from such degree of agitation.

Srila Prabhupada wanted, and wants, a worldwide society of Krishna Consciousness, for spreading the Yuga Dharma of the congregational chanting of the Holy Names of the Lord. Not a handful of angry, agitated men who sit on high chairs and foulmouth everyone else in the world--thinking they are God’s gift to humanity. And splitting hairs over who can do this and who can do that.

It is Lord Chaitanya’s prediction that the Holy Names will be chanted everywhere, so it will happen for certain. But perhaps because of attitudes and behaviors like this, the chanting of the Holy Names is now more widely propagated outside the corrupted walls of what you believe to be Iskcon.

Fortunately, Srila Prabhupada’s Iskcon encompasses far, far more than what most people understand. And it will spread in spite of such modern day misunderstandings of what Srila Prabhupada taught.
Posted by krishna1008 at 3:49 PM