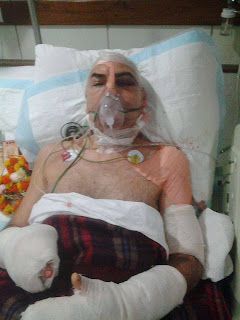 Under the powerful prayers from the sincere souls, by the grace of God, Sri Sri Radha Krishna, Sriman Sadhu dasa prabhu is gradually recovering very favorably from the mortal criminal attack perpetrated by a local Bengali Iskcon member, initiated by H.H Jayapataka Swami as Mahabandhu Dasa. A.K.A Manik Mondal.

I am here far away. If I was there in Mayapura, this situation would have never happened. Unfortunately I am ill from all that materialistic environment (in Mayapura). I told Sadhu that I don't wish to see any more of those hundreds of (Jayapataka swami's) evil people whom keep the show running there, that I want to live in peace in another better place, even at the price to remain alone for the rest of my life.

I recommended that Sadhu das leave there too, and take his mother to a better place, where she can walk out side safe, and he can live without expecting a deathly ambush at any time. Life in Holy Places are one thing, according to the description of Srimad Bhagavatam, but are something completely different from what we see and face there today.

Also I told Sadhu that the description from the Srimad Bhagavatam about the transcendental qualities of Dham Vasis, the residents at Holy Places, doesn't match with the actual behavior of those evil creatures whom we see living there today. So I presented many explanations why, under the name of following Srila Prabhupada in original way, he should consider my humble suggestion, and depart from there.

It does not even matter to them how many more Sadhu victims will happen in the future, the mentality of the top (GBC guru managers) and from their base (their disciples) will never change. I explained that I could die trying to save the dham there, but I wish to die for a better purpose. For me to die -- here or there -- doesn't make a big difference, as long as there is a honorable reason behind it, but for me to die trying to save the current lot of corrupt lot of people in Mayapur -- was no a honorable reason for me continue to remain there, and to die there.

[PADA COMMENT: Right, trying to fix the criminal guru's program, even in holy dham, will maybe get you killed. Agreed. And since the GBC's gurus and leaders are sometimes criminals, they may attract other criminals as their followers. This is of course why Bhakta das is one of the GBC's guru program cheer leaders, he has a track record of being a criminal himself, and so now some folks are promoting Bhakta das as their spokesman, since criminals love to promote other criminals (see previous articles about Bhakta and his groupies for reference).

Well anyway, this is a good analysis, yes you can try to get this "evil" element out of the holy dham, but you might die in the process. We think that is possibly what happened to Aindra das as well. The bad news is, the holy dham has been attacked by dacoits, the good news is, more people are figuring that out. Right, we can die trying to fix this criminal mess. This person says, better to remain alone if required and worship HDG Srila Prabhupada ourselves. Good progress! People are waking up, its just sad that its taken so long, we knew this was a criminal take over in 1978. Anyway, so what, better late than never. ys pd]

External expose may be required rather than fighting inside their campus:

VIDEO history of me and Tamal Krishna Goswami (leader of the criminal take over project):
http://youtu.be/wMD6jyrLXwA

PADA: ALL OF THIS IS THE RESULT OF --