Rocana Fights His Own Shadow 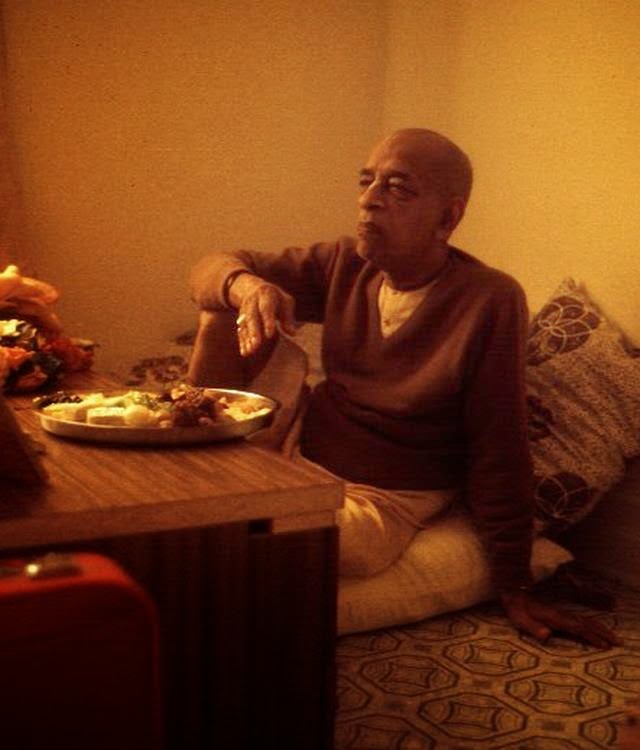 LW Writes“The point is that Rocana fancies himself as a great ISKCON reformer, a representative of the great “Sampradaya,” perhaps a great devotee, etc. — yet he will not acknowledge the sincerity and wisdom of those who are also trying to serve and love Srila Prabhupada in a different way from his own. He lumps everyone in. “Give the dog a bad name and hang him.” No, we are not all one. There’s unity in diversity. So just who is the “non liberal fundamentalist”? Please think about it, accept what you wish, and discard the rest. As Prabhupada wrote, “Take the essence.”

We have a similar saying;” Use what works, throw out the rest.”

Let me say that I much prefer when you are writing as an individual and putting your own thoughts forward. It is only then that I feel confident that I am writing to someone who can be reasoned with.
Your question in regards to whether Rocana dasa is a non-liberal fundamentalist is not a new one to me.

While his defense would be to tell you that he is simply refusing to compromise the philosophy, that is just a bunch of chafe, something that he throws up in hopes to distract and draw your attention away from something that I know he feels uncomfortable about and doesn’t really want to examine very closely.

As I mentioned in my article, many years ago I won from Rocana a concession, which in the light of it; renders all of his complaints about the Rtvik philosophy being asiddhantic to be without merit. I also mentioned that he was ungracious about it. He was ungracious because he was angry about what he was admitting to, which was that Christianity was a bona fide disciple succession.

[PADA: And Srila Prabhupada says that Jesus is still accepting the sins of his followers now, if they are sincere. Rocana's post 1977 gurus could not save themselves from sins, much less absorb the sins of others. In 1986 Rocana's guru reform program was saying "anyone who chants their rounds can be an acharya," ummm - anyone who chants their rounds can absorb sins like Jesus is doing?]

I had presented Rocana with Srila Prabhupada’s own words as the evidence of this so naturally, even though he didn’t much like admitting to the fact that there existed, at all, any bona fide disciple succession in which a spiritual master could accept disciples after his death or physical disappearance he had to. My argument and the evidence pinned him down to a conclusion that was inescapable.People don’t like being pinned down that way and Rocana dasa wasn’t an exception.

[PADA: Rocana is simply angry because he supports the GBC gurus and their "living guru" idea, but today he cannot name his living guru anymore because PADA has exposed his living gurus as frauds. Now he simply says, there is a (non-identified) living guru out there somewhere, because as soon as he identifies his living guru, we will discover that person is not bona fide. Simultaneously, he says that worship of a so-called departed guru is bona fide because the Christians are doing that. He is fighting his own shadow.]

I had prefixed my argument with the statement to Rocana that he could never defeat the Rtviks, “because they had this:” and then presented Srila Prabhupada’s words as evidence. Rocana accepted that Christianity is a bona fide disciple succession based upon Srila Prabhupada’s words, but it made him angry and instead of settling down to a reasonable discourse he replied rudely “so what?”

He must have seen what he had gotten into because I received from him a list of sectarian minded objections, such as “The Christians eat meat…, etc., to which I patiently replied that the early Christians seemed to have been vegetarians and according to Jerome Eusibius, Jesus’s brothers were vegetarians, something that implied that unless mother Mary was a short order cook that Jesus was probably a vegetarian to.

Even if Jesus wasn’t a vegetarian and only James wasn’t, the point was that Rocana had already accepted the point that Christianity, which like the Rtviks employs a system of initiation in which a no longer physically present spiritual master continued to accept disciples and was now simply trying to back paddle because somewhere deep down inside of himself he knew that his chance of ever being much of any use in convincing the movement that the Rtviks were asiddhantic would come undone if this was ever made public.

Whether or not one should incorporate Rtvik initiations into ISKCON is quite a different consideration than whether or not what Srila Prabhupada taught was founded upon sound guru-tatva. Of course it was and therefore Rocana and anyone else’s claim that Rtvik is asiddhantic is without merit.

After this I told Rocana that I considered him to be sectarian or an “asslike Vaisnava.” But I am harsh and not soft spoken and due to my own defects could not bring him around, nay, I may even have contributed to his degree of conviction because prabhu, not all of us think that Christianity as it has become offers an enlightened tradition. In fact, in the words of Bhaktissidhanta Sarasvatti it is like Putana, the slayer of the innocents. Rtvic can go that way too and become just another damned church of the world. Who among you will found an order sworn to stop this from happening?
Mahesh Raja says:

George A Smith: After this I told Rocana that I considered him to be sectarian or an “asslike Vaisnava.”

We keep on reminding Rocana das that he is MISLEADING the innocent from Srila Prabhupada the ACTUAL Diksa Guru by HIS Anti Ritvik propaganda THIS means he has to face the result of his karma:

SB 6.7.14 Indra Offends His Spiritual Master, Brhaspati.
A stone boat would be unable to float and would sink in the water with its passengers. SIMILARLY, THOSE WHO MISLEAD PEOPLE GO TO HELL, AND THEIR FOLLOWERS GO WITH THEM.

[PADA: Rocana was a member of the 1986 "50 man guru reform committee." He and his pals thought they could repair their fallen down acharya's program. Rocana thinks acharyas are deviants and he is the acharya repair man who fixes deviant acharyas, that is how foolish he is. He has never admitted that his guru reform was a fraud because gurus do not need reform.

As for the children of ISKCON mentioned in the video above, yes, they had to suffer terribly due to Rocana and his bogus gurus program. He has never taken responsibility for the hell he created for these children by his support of his living gurus project.

Rocana's 1986 guru reformers excommunicated me and Sulochana's program instead of coming to help the children as we requested, and worse, the reformers reinstated a known homosexual as their acharya. Fine reform you got there Rocana! Rocana and his "living" illicit sex acharyas program, and then subsequent bogus idea that acharyas need reform from deviations, has ruined ISKCON, lets face it. ys pd]
Posted by krishna1008 at 6:31 AM