Individuals, most of whom, no longer live in ISKCON temples. are free to follow any political party and support any candidate. Everyone is free to accept or reject religious principles and practices that Srila Prabhupada introduced. As friends of the devotees, you are of course free to choose. We are all just beginners on the bhakti-yoga path and full surrender is a long way off. We all have varying degrees of commitment.

I most vehemently oppose persons who are taking advantage of their tax-free, non-profit status, and living under the umbrella of non-profit organizations, accepting donations from the public, claiming to promote Krsna consciousness, which includes pro-life protection of children in the womb, but who are actually promoting a political campaign opposed to it instead, which happens to be illegal under IRS tax code.

We are only interested in the simple act of recording tax code violations and reporting them. The rest goes no where. It takes a lot of work, cross checking, submitting the tax forms, but who cares that much or is clever enough to do it? What the Democrat-Vaishnava community is counting on then, is no one will ever blow the whistle on Prabhupada's movement, but if ever there was an opportunity to do it, this is like shooting fish in a barrel. In the back of your mind, you know, you just might get "Sulocaned" for your trouble, so few ever try.

PADA: Most devotees no longer live under the ISKCON umbrella and therefore they are not even slightly legally required to follow the IRS charity codes of ISKCON. If reporting false charity use could be easily done, then why haven't you got ISKCON audited by mis-using the aim and object of the religion a long time ago?

Suresh: What I'm speaking of here is different however. First the tax-exempt ISKCON temples and organizations may not engage in promoting political campaigns, according to IRS code. Secondly, many leaders of ISKCON, and disciples of Srila Prabhupada, have separately incorporated themselves, setting up tax-free, non-profit organizations, so they, their families, and friends, may also live under a tax-free umbrella, in the name of spreading Krsna consciousness, in addition to ISKCON's charities. However, because they're also engaged in promoting a political campaign, they're potentially breaking the IRS code for themselves.

IRS tax law was changed, a few years ago, so that individuals, who are members of charities, are entitled to their own political opinions, separate from the charity, without violating tax code for the larger organizations they serve. However, many of these same individuals in greater ISKCON, also have their own tax-exempt charities, so when they engage in promoting Tulsi Gabbard's campaign, especially involving their own charities in her campaign, they risk losing their tax-exempt status as well.

Because they believe Tulsi Gabbard is a Joan-of-Arc type, shakyavesa empowered representative of Krsna, and savior of America, their need to promote her campaign is so urgent, along with the intense desire to remove President Trump, from the White House, whom they cast as a demon, they're willing to risk losing even their tax-exempt status, to promote her political campaign. The IRS won't take the case to end their tax exemption, unless the non-profit has sufficient assets compared to cost of an investigation. Most of the groups will likely get away with it, because they're too small now and possibly broke as well. Tulsi would give a great shot in the arm to failing ISKCON-America, by attracting new members (to milk) with their much needed cash flow, which is likely what it's all about. Get it?

PADA: Right, again most devotees no longer live under the ISKCON umbrella and therefore they are not even slightly legally required to follow the IRS charity codes of ISKCON. Of course, ISKCON incorporation papers ALREADY say that they are supposed to follow and agree with Srila Prabhupada's teachings, but that is not happening in official ISKCON either. In fact, the GBC is burying deviants in the dham while claiming that this is Srila Prabhupada's teachings.

Why not fix that issue instead of making a big hoopla about Tulsi Gabbard, who probably agrees with us that its not a good idea to bury deviants in the dham? You got to pick your battles, and the main battle should be -- to go after the upper crust managers of the society who are promoting the worship of deviants as God's successors, and placing said deviants into samadhis.

And if you can nail someone for not following the "ISKCON Articles of Incorporation," what has taken you folks so long to do that, and nail the GBC a long time ago? What is the hold up here? You are going to legally nail the Tulsi Gabbard support crew, while avoiding legally going after the illicit sex with men, women and children guru's sabha crew? 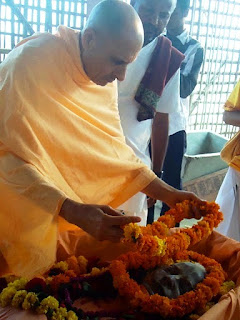 Is this following the IRS tax codes of ISKCON?

PADA: Not that long ago, anyone going to a Siddhaswarupa program was then banned from ISKCON, but now various official ISKCON leaders are apparently encouraging and promoting -- a follower of Siddhaswarupa. So there is really no standard process here whatever. It seems if one has some sort of fame or position, they will be promoted, and the old Siddhaswarupa battle is completely forgotten. Srila Prabhupada did say we should not get involved with politics in general because "you will become implicated."

Suresh: You're not understanding my point.

PADA: Ok but ISKCON already says that Krishna's successors / parampara members / acharyas are often debauchees, which is for sure not part of their Articles of Incorporation papers? And worse, they are preaching that idea to little children, that God's successor acharyas are often debauchees, which a  lawyer friend told me is -- illegally corrupting the morals of minors.

Why has nothing ever been done to address this is what people ask me all the time? "Devotees" have (illegally?) preached that the successors to Krishna are falling down left, right and center for years now, and that is not part of the Articles of Incorporation in any official ISKCON document.

If we cannot even stop people from illegally corrupting the morals of minors, not sure how we can fix much else? But if you have a plan, I'll help out. This is the whole question from 1977, how can we get devotees to follow the original Articles of Incorporation of ISKCON, which does not mention making conditioned souls into its acharyas?

PADA: The point is simple, already almost no one is following the original Articles of Incorporation of the ISKCON society. If forcing people to comply with these documents is a good method of fixing things, then my lawyer friend would not be asking me -- why this is never being fixed since 1977? 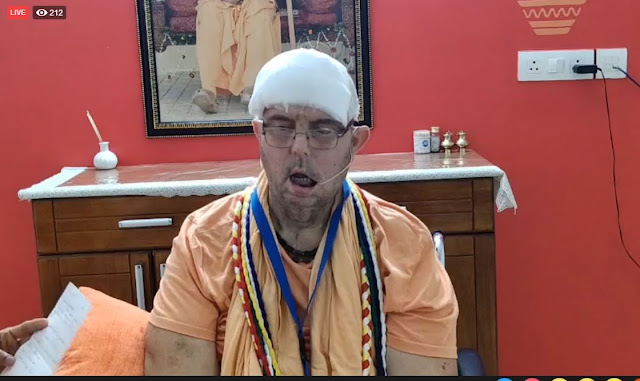 They did not even follow the order, for neophytes to NOT take disciples and take their karma. To sum then, it not really possible for people like Suresh to force the GBC to follow the "Articles of Incorporation of ISKCON." He does not seem to be even working on forcing the GBC to operate in that process.

Instead, he wants to force the alienated mass of rank and file -- who are no longer even participating in ISKCON for the most part -- to have to follow the official ISKCON "Articles of Incorporation" and "ISKCON IRS guidelines." OK, that seems like a lot of diverting from the real issue, i.e. the GBC does not follow the actual process given by the acharya, nor do they apparently follow the process as is stated in the original ISKCON "Articles of Incorporation." Its avoiding fixing the foundational deviation. ys pd